All Power to the Rank and File

A case for a workers’ insurgency in New York City, and everywhere. 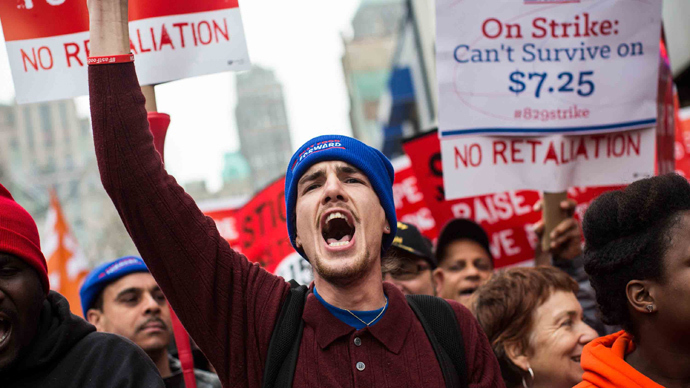 Organized labor is in crisis. The union movement is in a jam and we are looking down the barrel of a gun. We all know this. It’s so true it has become cliché. Our density and corresponding strength keeps going down to where we now represent only one in ten workers. We have quite literally been decimated – that is from the old Roman punishment to execute one-in-ten to discipline a group – in the last 30+ years since we were 20% in 1983. Now, we are now just one decimation left from disappearing entirely. Of course, these numbers don’t show the full story.

We still represent nearly 15 million workers, and though strikes overall are at their lowest, a number of protests and strikes such as the 2011 Wisconsin Uprising, the 2012 Chicago teachers’ strike and the 2016 Verizon strike galvanized the nation and were demonstrations of our latent power.

So on one hand, we’re nearly 15 million workers already organized and we have proved that we can win battles when we fight in solidarity with broader parts of our class instead of just fighting for the short term interests of our members. On the other hand, we face a government hell-bent on destroying us with national right-to-work and other laws which will sound the clarion call for the bosses to go on the offensive against us. With a billionaire boss as president, will there be any surprise when his friends and ilk attack us with impunity throughout the country?

This is not a new proposal, but one that appears and reappears as that old saying is always recognized, that if you want something done right, you must do it yourself.

The law which has always been on their side will be even further from neutral–in every election, every arbitration, every case brought to the NLRB–the boss will be fighting on ever better terrain. With new advantages they will go open season on us to destroy the bastions of decent livelihoods and punch at the whole of working and poor people. Then there’s the massive elephant in the room of expanded deportations, bans, and continued police killings as the Trump administration scapegoats immigrants, attacks Muslims, and offers even more protections to killer-cops to harass and murder black and brown people. This isn’t new of course, but Trump intends to outdo every administration before him.

So, we must prepare to fight.

Fortunately, as if there was something in the water, the concept of the strike has been brought to the fore in the resistance against Trump, from the Day Without an Immigrant, to the International Women’s Strike and other calls for general strikes. It is as if the limitations of street mobilizations and electoral actions were reached and we have begun to realize that our power lies in our work; that every workplace is a battlefield. This is a qualitative step forward. But a feeling is not movement and we cannot rely on spontaneous reactions to fight the worst excesses of the Trump regime. We need organization.

In every union local, we need to train a new layer of rank and file leadership that comes together around principles of solidarity, insurgency against union officialdom and class politics independent of the bourgeoisie. Such an organization can coordinate solidarity, put out joint agitation and propaganda, and in other ways build militant caucuses around a class-struggle program to unleash rank-and-file workers’ power in New York City and elsewhere.

On the first points, it is obvious that coordinated action is powerful way to expand the struggle and strike at bosses in new ways, such as how the Teamsters and the CWA with hotel workers were able to toss scabs–like particularly awful bedbugs–out of their hotel rooms during the Verizon Strike. This was effective enough to be banned by a judge’s injunction, but if an organization were in place that agitated in other sectors, that injunction might have been made impotent.

However, it is on this latter point that we face the biggest but most important obstacles. Some unions are more conservative and bureaucratic than others; with leaders more tied into the business unionism that has lead us into this dark alley. Some leaders have sat down with the president and spoken glowingly of their meetings and their attempts to curry favor.

Some union leaderships might be worse than others, but they all must be pushed, or replaced, to fight.

In such way bureaucratic union officials continue to collaborate with our enemies and threaten to use the non-organized among us as bargaining chips for short-term gains, to sell out other workers so that others might work for less. This is a recipe for disaster. To follow these leaders is to fall into the trap of signing our names onto the further division of the working class, and further divided, we will be conquered. Some union leaderships might be worse than others, but they all must be pushed, or replaced, to fight.

With our backs up against the wall, there is the opportunity to strike out. But, first we must rebuild our forces. To remove those who want us to flatter and beg, instead of fight. To pull, kicking and screaming the leaders in our unions who would have us double down on the failed strategy of reliance on the Democratic Party to defend us, instead of relying on our own power.

They mask their flattery and begging and dependence on the Democrats as ‘being realistic’ or ‘shrewd.’ But we know better. We can restore our forces if we build together, independently of the bosses’ parties. And it is through cross-union organizations of the rank and file that we can advance the struggles that can produce more militants educated in the crucible of shop-floor action and thus develop the militant minority necessary to cultivate our unions and rebuild the labor movement.

This is not a new proposal, but one that appears and reappears as that old saying is always recognized, that if you want something done right, you must do it yourself. Well, for the working class that means, quite modestly, that the emancipation of the working class must be done by the working class.

In New York City, various worker organizations and worker-militants have taken steps towards organizing actions for May Day. Our efforts cannot stop there, but to organizing the rank and file across the vast array of the city’s unions.

This will not happen overnight, and all the better because an organization with sound foundations will take time. But that process can start by using April to push our unions to strike on May 1st, and for rank and filers to march together at our City’s Mayday under a united banner against Trump and the twin parties of the rich that produced him.