Bessemer, Alabama’s police chief has confirmed that off-duty officers have been hired by Amazon to act as “security” for the BHM1 facility in the middle of a historic and intense union drive. Two Left Voice reporters who were recently expelled from Amazon’s premises by the cops report from the ground. 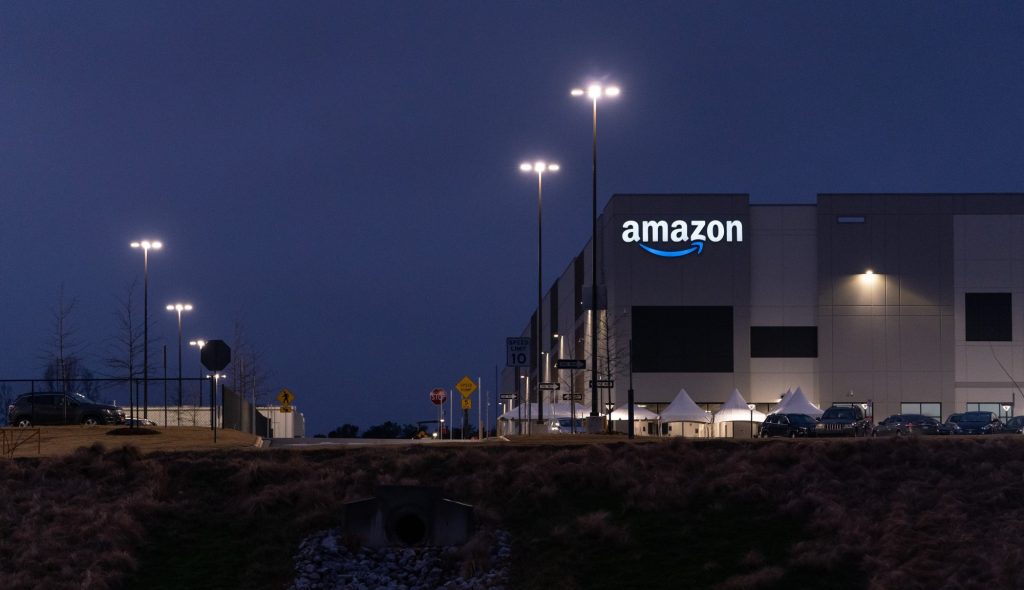 We came down from New York City to cover the historic struggle of Amazon workers to form a union and to amplify the stories of the nearly 6,000 workers who are putting their livelihoods on the line to fight for their right to collectively organize. If this union vote is successful, it will be the first union of Amazon workers in the United States. There is great potential in this union drive — an effort that is being waged by a primarily Black workforce in a virulently racist and anti-union state against one of the largest companies in the world.

Come to a panel with a Bessemer Amazon worker and Robin D.G. Kelly, author of Hammer and Hoe to discuss the results of the unionization vote. Sign up here.  Find the Facebook event here.

We arrived at the Bessemer facility to stand in solidarity with the workers and take footage of the facility. We moved away from the small group of supporters who come out each day with signs encouraging workers to “vote yes!” on the union, just a few steps down Amazon’s long driveway to film a report in front of the entrance sign. Almost immediately, a police car pulled up next to us. The cop inside told us that we were trespassing and couldn’t film on private property. “You can’t film here!” We were nowhere near the facility, only a dozen feet from the main road. There is no signage demarcating where public land ends and Amazon’s property begins, no signs prohibiting filming or pictures.

As we began to collect our things, another cop car rushed up to where we were, lights flashing. “Stay where you are. My supervisor needs to collect your names and IDs,” the cop said. “You’re with the press? Which publication?” The two cops got out of their cars and stood close to us to make sure we didn’t move. A few minutes later, a man in a golf cart rolled up behind the police cars. He came up to us and demanded our IDs. “I need to take your names down.” When we asked why, he gave no reply. The cops demanded our IDs again and we refused. After some back and forth, they finally let us go and we walked the two steps back to where other supporters were standing by the side of the road. The cops stayed behind to keep watch.

Left Voice reporters stopped by Bessemer police and Amazon security while filming a solidarity report in front of the Amazon BHM1 facility. Amazon has hired off-duty cops to moonlight as security on the premises to harass union supporters and workers. @BAmazonUnion pic.twitter.com/msGDcO4xnj

In the days leading up to a historic unionization decision, the BHM1 Amazon fulfillment center in Bessemer, Alabama is on lockdown. Only workers on shift and management are allowed in and out, the workers’ every move watched carefully. The company has pulled out all the stops in its union-busting effort, including financial incentives for “unhappy” workers to quit, mandatory anti-union meetings, and placing a mailbox on company property to “collect ballots.” Amazon even petitioned the city to shorten stop light times at its entrance so that workers leaving their shifts could not talk to staffers standing at the entrance or be exposed to pro-union signage.

Amazon has also enlisted the efforts of the Bessemer Police Department to act as “security” for the facility to intimidate not only workers, but also the many supporters, canvassers, and press who have come from far and wide to cheer on and agitate for the workers’ struggle. Off-duty cops guard the facility at all hours. Bessemer police trucks constantly ride up and down the streets around the facility and patrol the parking lot.

If you’re not coming into work or just leaving a shift, then the police — operating on the direct orders of Amazon management — are there to make sure you don’t step foot on Amazon property, especially if you’re supporting the union. In the circle of supporters who stand just outside the gates of the facility each day, most people have a story about an encounter with the police and Amazon’s security staff. One person told us that when their GPS took them inside the Amazon parking lot, they were surrounded by eight cops and security officers as soon as they got out of the car. The cops demanded their ID and told them to get off the premises or risk arrest. People in rental cars regularly stop by to take down the license plates of the people who come to flier on the side of the road and show solidarity with the workers inside the warehouse. The facility is surveilled from every angle. And the police are omnipresent, ready for any excuse to harass anyone who supports the union.

Moonlighting as union-busters for Amazon, the cops are key actors in Amazon’s behemoth campaign to kill the BHM1 union and all it represents. They are literally being paid to contain the union campaign and to create a hostile environment for the workers coming in and out of the facility each day, many of whom are people of color who are already the regular targets of police violence and harassment off the job. Now these workers are forced to come to work each day only to be met with cops watching them as they come and go, patrolling the parking lot and the surrounding streets. The police are there to intimidate workers just as much as supporters. This is yet another example of whose side the police are on: the bosses and the capitalists. And now they are doing the dirty work for a company that raked in $386 billion last year, even as it refused workers enough time to go to the bathroom, forced them to walk four flights of stairs innumerable times a day, exposed thousands of workers to Covid-19, and revoked their hazard pay in the middle of the pandemic. In this, the police are fulfilling their historic role as the guard dogs of capital, poised to keep workers in line and prevent them from exercising even the basic right to unionize or fight for better conditions for themselves and their families.

This is the same role the police played at the Hunts Point strike in New York City in January, when hundreds of workers at the most important produce market in the United States walked off the job to demand a $1 raise. The police arrested workers as they blocked a truck from entering the facility. The police stand at the ready — acting on the orders of Republican and Democratic mayors alike — to tip the scales in the bosses’ favor and undermine the struggle of rank-and-file workers to win even a fraction of what they deserve.

Yet at the same time that they repress working people, targeting people of color and killing Black union members like Philando Castille, they are also organized alongside workers in unions. If Bessemer workers are successful in their union drive, then they will join the ranks of the Retail, Wholesale, and Department Store Union (RWDSU), which is an affiliate of the AFL-CIO. This organization, which comprises most of the unionized workers in the United States, organizes thousands of cops across the country, welcoming the enemies of the working class into the house of labor. The cops are organized alongside the very workers they have been ordered to intimidate.

Of course, the cops’ role is not just to protect the interests of the bosses against the workers in the workplace, but to repress working class and oppressed people in every corner of society. The police who are now patrolling the Amazon facility night and day are part of the very institution that upholds systemic racism, killing Black and Brown people with impunity and who beat, pepper sprayed, and in some cases killed anti-racist protesters in nearly every city across the United States this summer. The police exist to repress class struggle wherever it appears, to beat the working class and oppressed into submission in order to ensure the smooth functioning of capitalist exploitation. Many of the workers at Amazon in Bessemer marched in the Black Lives Matter uprising this summer — the very police who repressed them in the streets are the same ones who are now acting under the direct orders of Amazon to undermine the union drive.

Cops are not workers. They exist to repress working people and bust unions. They serve only to protect the interests of the capitalist class and facilitate the daily exploitation of workers around the world. As such, they have no place at BHM1 and no place in the organizations of working people. In the spirit of the Black Lives Matter movement, Alabama’s militant labor history, and the Civil Rights Movement which preceded this historic fight in Bessemer, the rank-and-file of this potential new union must fight to prevent the police from intimidating workers and supporters. But that’s not enough: If the Amazon union is to stand a chance against one of the most powerful companies in the world, then these workers must organize alongside other unions to expel the police from all workers’ organizations.