After six months of organizing, Amazon workers in Staten Island have submitted a petition for a union election. Amazon is already fighting the request. 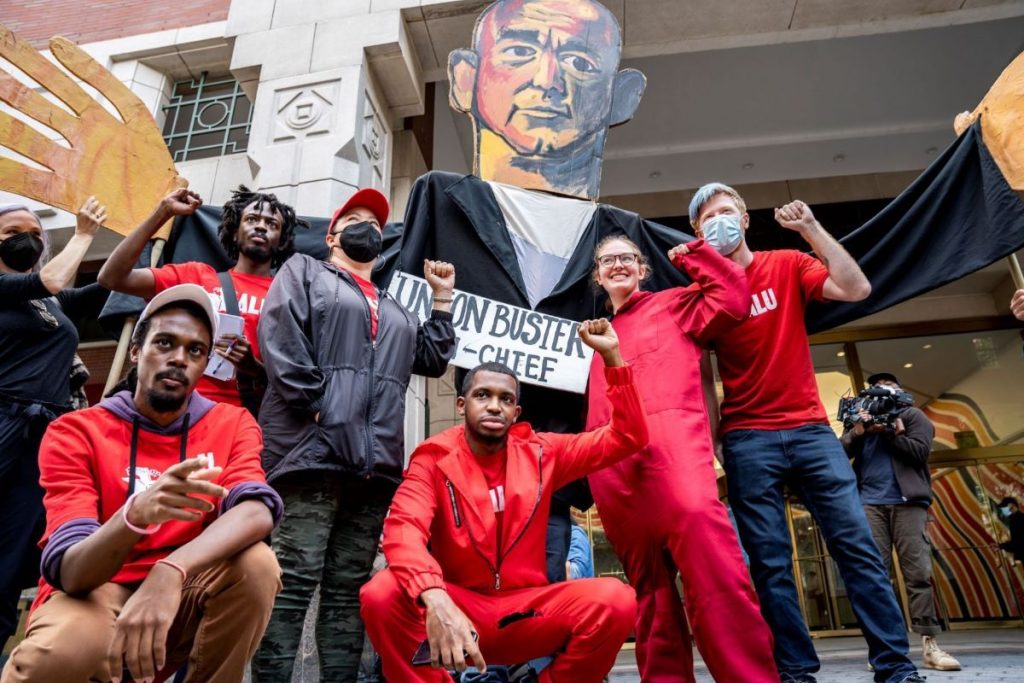 On Monday, October 25, Amazon workers at the cluster of warehouses in Staten Island, New York, filed a petition for a union election with the National Labor Relations Board in New York City. They presented over 2,000 signed union cards, more than the required 30 percent of the 5,000 employees needed to trigger an election according to NLRB rules.The petition was filed by an independent union called Amazon Labor Union, (ALU) headed by the former Amazon employee Chris Smalls.

At a press conference held just shortly after delivering the signed cards to the NLRB, Smalls explained that there will be a hearing with amazon representatives and the NLRB on November 15 to decide whether or not the election will move forward. Smalls said that the union was going to continue to collect signatures in the meantime. “Every single worker in the facilities will be notified that a petition has been filed,” said smalls, adding: “We’re going back out there tomorrow to continue talking to our co-workers.”

This new unionization effort comes after six months of gathering signatures at a tent located across the street from the Amazon facilities. The Amazon Labor Union has also organized several barbecues and have had a continual and visible presence at the warehouses for months now. Workers at this location got national attention previously in the beginning of the pandemic when they organized a protest to demand safe working conditions during the first wave of the virus, when hundreds of people were dying in the city every day. As a result, Chris Smalls was fired and has been working to build ALU and organizing to unionize Amazon ever since.

Now that the petition has been submitted, these workers will face a highly undemocratic months-long process that forces workers to essentially certify the union twice. This drawn out process will allow Amazon to use every union-busting intimidation and stalling tactic in the book to stop the union or the vote, as it has with other unionization efforts in the past. The experience of the recent failed union drive attempt in Bessemer, Alabama, earlier this year offers many important lessons. In order to prepare for and resist Amazon’s efforts to stop the process or boycott the vote, these workers will need to build a much broader rank-a-file movement that takes the union drive in their own hands.

After delivering the signed cards, workers told the press they want to fight for a new contract that guarantees protections for the workers who organized the union and voted yes, job security, health and safety improvements, longer breaks, medical leave, and bonuses, among other demands.

While there is no set date for the voting yet, workers went back to the tent as soon as they finished at the NLRB to share the good news and to keep gathering cards to be in a better position to defeat Amazon’s union busing efforts. To their advantage, their union drive is happening in the midst of an uptick of strikes and strike authorizations, that has has gained national attention.