Teamsters are spearheading an effort to unionize Amazon workers in Iowa. 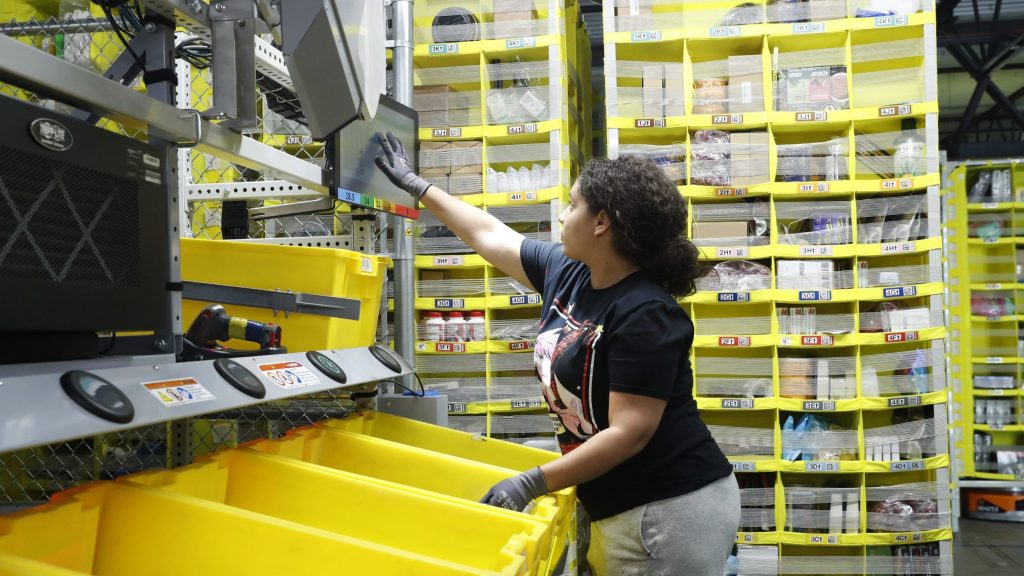 Just a few weeks after the push to unionize workers at Amazon’s warehouse in Bessemer, Alabama drew national attention, another organizing effort in the United States’ second largest employer is now reportedly in motion. The International Brotherhood of Teamsters is pushing to unionize workers at Amazon locations in Grimes and Iowa City, Iowa. The drive’s organizers say they have spoken to between 400-500 Amazon workers in the area, which, significantly, also covers the location of a new 1,000-employee facility in Bondurant, which opened in December of 2020.

A massive PR campaign has sought to establish Amazon’s reputation as a “progressive” employer. The company loudly trumpets its starting hourly wage of $15 and ‘good opportunities for advancement’ as evidence that they care about their employees. A quick glance at their record, though, shows that Amazon has little regard for its employees’ well-being. Though it’s higher than the current minimum wage, $15 per hour is far below a living wage in most parts of the United States. And the promise of advancement rings hollow when employees can be fired precipitously, especially in right-to-work states like Alabama and Iowa, especially if those employees are black or brown, especially if they attempt to organize their colleagues. Workers are assigned punishingly long shifts on their feet, with rigorously clocked meal and bathroom breaks, and with productivity measured by a series of degrading “gamification” processes which, far from relieving tedium, as Amazon claims, is a method for wringing greater productivity from their exhausted workers, and punishing them for failing to meet unrealistic goals.

Unionization would give workers a platform to challenge this inhumane treatment and fight for better working conditions. Beyond just the potential for better pay and benefits, collective bargaining threatens Amazon’s bottom line by undermining the bosses’ ability to dictate the terms on which they do business. If workers have a real say in the daily operation of their own workplace, it is unlikely they would tolerate 10-hour shifts during which they routinely pee in bottles to avoid disciplinary action. They would not subject themselves to the dystopian productivity video game systems that quite literally pit workers against one another and give bosses reams of ‘data’ to justify pay freezes or firings. These, however, are the very practices that allowed Amazon to rake in record profits during the pandemic, and for CEO Jeff Bezos’ already obscene net worth to balloon by nearly 150% during 2020. For this reason, no matter what employee-friendly concessions it makes, Amazon will block every worker-led effort to build power on the shop floor.

Like all employers, Amazon speaks out one side of its mouth about how its employees don’t need or want unions while also aggressively acting to discourage organizing efforts. Employees receive a barrage of texts and emails from the company with classic anti-union scare techniques. Anti-union propaganda posters hung in workplace bathrooms tell workers to “know your worth before signing up for a union that doesn’t know you.” The company even has created a website, (complete with the laughably un-cool hashtag #DoItWithoutDues) to level veiled threats about rescinding workers’ current benefits should unionization efforts succeed. Some reports even suggest that the pattern of traffic lights was altered outside of an Amazon facility in a bid to make organizing efforts more difficult. And, of course, there was the case of Rashad Long, who was fired last April in an attempt to suppress his organizing effort at the Amazon Staten Island facility.

Amazon even targets workers in the bathroom. These are photos from the toilet stalls.

Most egregiously, Amazon has even retained the services of the infamous Pinkerton National Detective Agency, a company with a long history of brutal union-busting techniques. The Pinkertons have been hired to consult Amazon’s Global Security Operations Center and to conduct surveillance on Amazon employees across Europe who are suspected of union activity. Modern-day Pinkertons have moved beyond the violence of their early days, but they still employ such unsavory techniques as infiltrating organizing and strike efforts, and diffusing union activity with both external and internal pressure tactics with no respect for formal labor law.

A key difference between the drive in Bessemer and the latest one in Iowa is worth noting: Whereas the Bessemer effort was organized by rank-and-file workers, the push in Iowa is being spearheaded by a local of the Teamsters Union, whose very name is a byword for the ambiguous relationship between organized labor and workers’ power. Though the Teamsters union has at times been a strong and progressive organ of organized labor’s power (for example, when a militant rank-and-file tendency led it to take a 24-day strike against UPS in 1997), it is currently controlled by a bureaucratic ‘union aristocracy,’ personified in  president James Hoffa, who is notoriously cozy with the bosses in the logistics industry.

However, while remaining wary of the risks that attend established unions, we should look hopefully on any organizing effort at Amazon, and lend these organizing efforts our support and solidarity. Real, on-the-ground organizing in the fight for better conditions is exactly the kind of work unions should be putting organizing energy and members’ dues towards, rather than supporting bourgeois politicians in elections, or acting as a mediator between workers and management.

As one of the biggest private employers in the world, a demonstration of workers’ power at even one Amazon workplace has the potential to inspire massive solidarity across its global workforce. Amazon has used the Coronavirus crisis to squeeze its workers harder than ever, while also insinuating itself into the fabric of global commerce ever more deeply. While this is cause for alarm, it also presents an even greater opportunity for, quite literally, the “workers of the world” to show their strength.

The dissonance of being called “essential” and “heroic” for many months while being paid paltry wages to work in life-threatening conditions, is clearly pushing Amazon workers to a boiling point. Amazon’s ballooning profit margin during the pandemic stands in stark contrast to its employees’ treatment and compensation, and it can’t hide from the consequences much longer. As millions who were asked to stay home during the pandemic for the sake of public health can attest, Amazon workers are essential, not just to the comfort and convenience of middle class Americans, but to world commerce and the functioning of global capitalism. It was their hard work that has made billions for the Amazon bosses; this effort shows that they know their own strategic importance, and an increasing willingness to leverage it.