Megacorporations like Amazon are racing to rebrand themselves as leaders in environmental sustainability. But capitalism is a system that is inherently dirty and unsustainable. 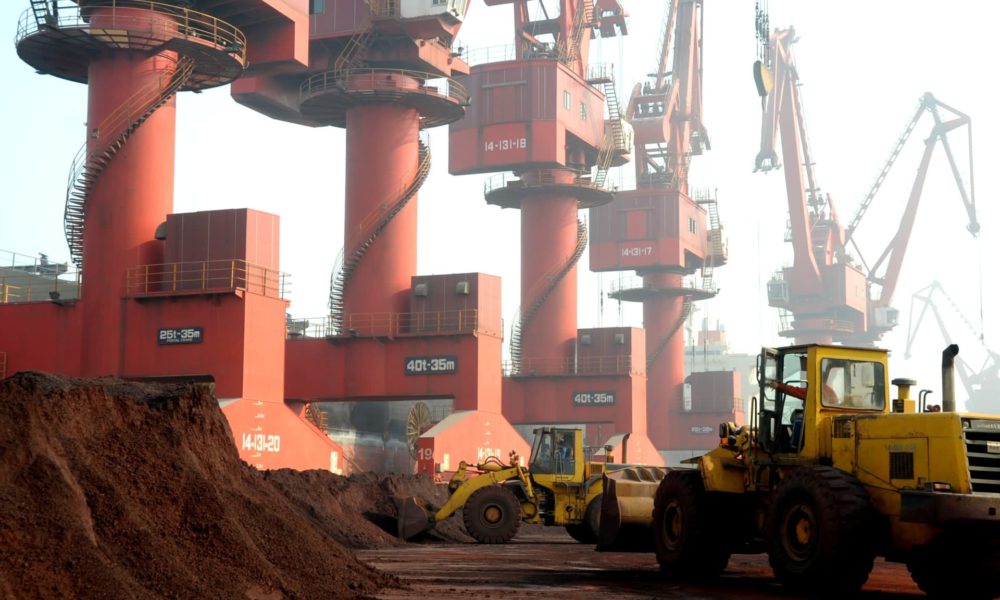 A new environmental movement is gaining steam. But this time around, it’s not in the streets and not led by any Swedish teenagers. This time, it’s the world’s largest corporations that are going to lead the charge against the climate crisis. Or so we’re told.

Last fall, the world’s largest retail company announced a new so-called Climate Pledge to slash greenhouse gas emissions and achieve “sustainability” in its operations. Amazon declared that half its shipping would have net zero emissions by 2030, while its business operations would make use of 100% renewable energy by the same year. These promises are the latest attempt by a major corporation to brand itself as a leader in environmental responsibility.

It was bad luck for the company, then, that just a day before the announcement, over 1,000 Amazon employees walked off the job to protest the company’s horrendous environmental record. According to a statement put out by the employees,

Amazon contributes directly to climate change through intensive use of fossil fuels throughout our businesses and pollutes communities with our fossil fuel infrastructure; we have custom solutions to help oil and gas companies accelerate extraction and exploration of new oil and gas reserves; we’re funding the premier climate denying think tank and we funded 68 members of Congress in 2018 who voted against climate legislation 100% of the time.

These employees’ actions seem to have struck a nerve among Amazon executives. Last week, it was reported that the company threatened to fire employees who spoke out against the company’s environmental practices. This threat has not silenced the workers, however. “It’s our moral responsibility to speak up—regardless of Amazon’s attempt to censor us,” said Maren Costa, one of two employees who received an official letter of warning from the company’s lawyers. “Especially when climate poses such an unprecedented threat to humanity,” she added.

Amazon’s employees are right to call attention to the company’s contributions to global warming. Each year, planes and trucks hauling Amazon’s products put—by the company’s own estimates—19 million metric tons of carbon into the atmosphere, about as much as the annual emissions of an entire Central American nation. When accounting for emissions from production and operations, Amazon’s total carbon footprint comes to an astonishing 44 million metric tons, placing it near the top of U.S. businesses and surpassing rivals like Apple, Target, and Google’s parent company, Alphabet. Only a few companies, like Walmart and the largest fossil fuel corporations, emit more greenhouse gasses. When it comes to the use of fossil fuels, Amazon is one of the dirtiest companies on the planet.

This doesn’t even tell half the story of Amazon’s impact on the environment, however. Each year, the company’s operations and products produce millions of tons of waste, notably plastic waste. This practice only worsened in 2019, when the company announced it would be moving away from cardboard packaging and toward lightweight plastic packaging. The shift was cynically presented as a way of reducing the company’s carbon footprint, since the plastic packaging requires less energy to produce and ship than cardboard. But unlike cardboard, the plastic mailers are extremely unlikely to be recycled. According to EPA estimates, only about 9% of discarded plastics are recycled each year. The vast majority will end up in incinerators, landfills, and oceans. About 300 million tons of new plastic pollution are created each year. It is no wonder that by 2050, we will have more plastic in the oceans than fish, according to the UN.

In recent years, Amazon has also become a major player in the consumer electronics market, which has meant an even deeper impact on the environment. Smart devices like the Amazon’s Kindle, Fire and Echo products rely on extracting rare earth minerals, one of the most ecologically destructive mining processes. By some estimates, just one ton of rare earth minerals creates 2,000 tons of toxic waste, waste that often makes its way into water systems. Rare earth minerals, which may be mixed with radioactive compounds in the ground, have been linked to various health disorders, including lung and pancreatic cancer. About 85% of rare earths are mined in China. According to China’s State Council, mining these minerals has “severely damaged surface vegetation, caused soil erosion, pollution, and acidification, and reduced or even eliminated food crop output.”

Amazon is not the only corporation trying to build a green image. Google announced last year that it would be shifting toward “sustainability” in its operations and production line. It has already purchased what it says is enough energy from wind farms in Iowa, South Dakota, and Oklahoma to reach net zero emissions at all its facilities. Apple and Microsoft have similarly planned to transition to 100% renewables. Even the fossil fuel companies have joined in on the action. In the past decade, companies like BP, Shell, and Chevron—among the biggest contributors to global warming—have launched major PR campaigns touting their production of biofuels or other “alternative” energy sources, even though these energy sources remain a small fraction of their overall energy production.

Indeed, a boom in so-called green businesses is underway, and these businesses are attracting billions from investors. The electric car manufacturer Tesla is now the most valuable auto company in the United States, not because it sells the most cars—it’s not even close to the top of the list—but because of its image as an environmentally responsible car company of the future. Corporations like these have increasingly found opportunities to take advantage of the public’s justifiable anxiety over global warming to hawk their new “green” or “zero emissions” products and boost sales.

But capitalism is fundamentally incapable of acting in the best interests of society or the environment. Green capitalism is a cruel joke. It is not simply that Amazon and the world’s largest corporations have made the occasional misstep in their environmental practices; rather, these companies can act only in the interest of capital accumulation, which necessitates the plundering of the earth. Corporations cannot act any more “morally” or “responsibly” toward the environment than they can in the treatment of their workers. Just as employees are simply a source of surplus value, for capital, nature’s only importance is its ability to be converted through labor into commodities, or to serve as a dumping ground for the system’s waste products: plastic trash, toxic waste, or greenhouse gasses.

Here and there, small businesses may try to adopt more environmentally responsible practices than those of Amazon and the other monopolies. But these companies have nowhere near the capital needed to compete with the world’s largest companies. Corporate giants, like the Big Four in the tech industry, can always produce and sell their goods for less than the mom-and-pops. For this reason, small businesses cannot build enough pressure on the largest corporations to improve the environmental impact of their operations; competition creates a race to the bottom—driving down wages, cutting costs, and giving companies free rein to appropriate nature wherever possible.

Obstacles and Opportunities for Socialists and the Environment

More and more, the goods and services we rely on are produced by only a handful of companies. Amazon is thought to control about one-third of the online retail market, in addition to its control over subsidiary companies like The Washington Post, Whole Foods, and Ring. This trend toward monopolization can be seen across the economy. In industries as varied as smart phones, hardware stores, and pharmacies, two companies control over 80% of the market. This presents enormous and deleterious consequences for the climate and for the environment. The biggest companies hold enormous sway over government and can, in some instances, even write environmental policy themselves, such as when the states of Kentucky and Oregon passed laws exempting corporations from legal responsibility for the air pollution they emit. Who was the author of this legislation? ALEC, one of the most powerful lobbying organizations represented the country’s largest corporations. These monopolies or duopolies also feel far less pressure from consumers, who have little choice in where to buy their goods and services.

There are, however, opportunities offered by this monopoly model. The megacorporations show that planning on a massive scale is indeed possible. Take Amazon, for example. The retailer has developed technologies for shipping more than 1 billion products within just the United States each year. It uses advanced computer systems, robotics, and automation to reduce to a bare minimum the labor time necessary to sort, pack, and ship its goods. But its planning isn’t directed toward the good of society as a whole, but rather toward the short-term profits of the company. State ownership of these monopolies would provide an enormous advantage to society, reducing waste and greatly reducing the time workers need to spend time on the job, while providing goods and services that benefit all of society.

But this does not mean we would adopt the dirtiest practices of these companies—like using airlines to ship inessential products across the country overnight, or relying on plastic packaging. State-owned companies, run by their workers, would prioritize instead the well-being of workers and consumers and environmental sustainability. Rather than producing luxury goods, its resources could be put into building renewable energy infrastructure for the country.

One thing is clear in the era of monopolies: Consumer activism is a dead end. We must give up on the idea that we can “vote with our wallets” to achieve an ecologically sustainable society. A choice between one dirty megacorporation or another is no choice at all. Further, the idea that corporations can be persuaded to adopt environmentally sound production fundamentally misunderstands the nature of the capitalist system.

Only a planned, rational system offers humanity the possibility of avoiding the worst climate scenarios. Capitalism is fundamentally incapable of planning at a system-wide level. Marx pointed out that while the capitalist insists on the tightest controls and the elimination of every inefficiency within his own factory, “that same bourgeois mind denounces with equal vigour every conscious attempt to socially control and regulate the process of production.” That’s why only socialist society presents this possibility. We cannot count on green capitalism to offer a way out of our urgent ecological and climate crisis.