Amazon’s ballot-collection tent is straight out of the union-busting playbook. 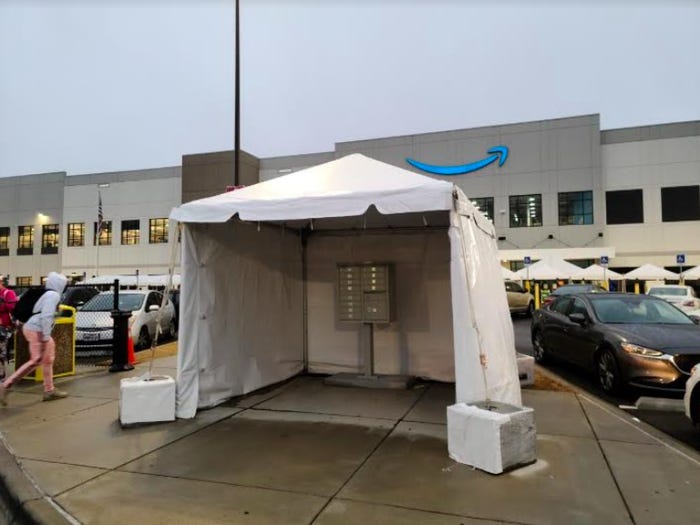 The union drive at Amazon’s Bessemer, Alabama warehouse was a decisive defeat for the Retail Wholesale and Department Store Union (RWDSU), which was leading the effort. This was by far the largest union drive to ever take place among Amazon’s U.S. employees, and many emphasized the game-changing influence that organizing one facility might have had on Amazon’s vast U.S. workforce. Of course, no one was more aware of the potential consequences of a successful drive than Amazon itself, which is why they deployed a spate of egregious and illegal measures to chill enthusiasm, intimidate workers, and manipulate the vote. Because of Amazon’s blatant interference, RWDSU has already filed an objection with the National Labor Relations Board (NLRB) to contest the election outcome, which could lead to another vote being called, or to the NLRB certifying the union anyway.

Left Voice is hosting a panel with a Bessemer Amazon worker and Robin D.G. Kelly, author of Hammer and Hoe to discuss Black struggle, labor struggle and the results of the Amazon unionization vote. Sign up here. RSVP to the Facebook event here.

Despite attracting unprecedented national attention and solidarity, the campaign in Bessemer faced huge obstacles. Beyond Amazon’s everyday precautions against labor power (for example, it retains the infamous Pinkerton Agency to monitor potential organizing amongst its workers worldwide), the workers in the Bessemer facility were barraged by daily anti-union text messages, held captive at mandatory anti-union meetings, and confronted with anti-union posters in bathroom stalls. Top Amazon officials engaged in public pissing matches on Twitter with politicians who supported the union drive, and many Twitter accounts belonging to suspiciously pro-Amazon workers gained attention and followers unnaturally quickly. Amazon even pressured the city of Bessemer to change the timing of a traffic light in front of the facility to make it harder for organizers to approach employees in their cars.

One particular measure taken by Amazon, however, so perfectly captures the underhanded nature of their union-busting that it deserves special attention: a tent, set up in the warehouse parking lot, with a Postal Service mailbox for ballots. This is a textbook example of employer intimidation. The pressure campaign that management waged to get it installed shows how a behemoth like Amazon can leverage its structural advantage as a major employer in a small, economically depressed town, and how it can ignore government when it suits them, or even pressure the government into working with them. It’s one of many clear reasons that the results of this vote should be thrown out.

For context: back in January, when the union drive was picking up steam, the head of the NLRB rejected Amazon’s request to place a ballot box on the company’s property. This is standard practice to prevent employers from using any number of standard anti-union tactics. Workers may feel intimidated by having to submit their vote where supervisors might see, or they may be more likely to submit a “no” vote if a ballot box is easily accessible after yet another mandatory meeting where bosses decry the evils of unions. There is even valid concern that workers may not understand that the union is separate from the company, a misperception that Amazon intentionally reinforced by covering the ballot tent in text with the company’s stylistic branding. These were all concerns cited by the NLRB in their decision to not allow Amazon to place a tent for ballot deposit on their property.

In other, unofficial correspondence, officials from the NLRB also expressed concerns that a tent for ballot collection was an unnecessary risk during the Covid-19 pandemic, since ballots were sent to employees by mail and meant to be collected by mail. Putting up a tent with a drop-box, they emphasized, does not make voting any easier, as Amazon was claiming.

However, Amazon didn’t bat an eye at the NLRB’s directives. Instead, they had the Postal Service set up a mailbox, specifically modified for ballot collection, right by the front entrance to the warehouse. Thanks to Freedom of Information Act requests, we now know that USPS did not take this action on its own, as it had initially claimed, but only as a result of a relentless pressure campaign by Amazon management. The goals of the campaign are clear from the details cited within these emails: Amazon was most intent on having the box installed by February 7th, the day before voting was to begin; then, as if the box’s purpose was not already clear enough, both the mailbox and tent disappeared as soon as the vote was over. Essentially, Amazon strong-armed the USPS into ignoring the NLRB’s directive, and their complete disregard for the NLRB’s concerns make it clear that voter intimidation was not a side effect — it was the primary motivation.

This is a perfect example of Amazon’s approach to labor relations: they desperately want to appear worker-friendly, positive, and “woke,” which is why the more overt pressure on workers took the form of “team meetings,” text messages, posters, and a cheery website full of anti-union scaremongering. However, Amazon is as virulently anti-union as they come, and therefore engages in the same tried-and-true squeezing of labor that every capitalist enterprise does. Their voter-intimidation mailbox is just one variant on a tired standard out of an extremely old playbook. Despite their friendly facade, Amazon will always act swiftly, ruthlessly, and with no regard to labor law or its employees’ well-being, in order to stifle threats to its bottom line.

The blatant illegality of their tactics are reason enough to throw out the results of the vote, but we also can’t forget that the conditions under which Amazon feels empowered to use them is one built by Democrats and Republicans alike, through decades of anti-labor laws and “business-friendly” regulation. Politicians like Joe Biden who give lip service to unions and labor power may pass incremental reforms, but these measures are intended to quell militancy, not build working-class power. Democrats, at the end of the day, are another party beholden to capital, not to workers. In such a landscape, it’s unsurprising that Amazon can easily manipulate or ignore the government without consequences, because it knows that bourgeois politicians of all stripes are fundamentally pro-business. But the sheer intensity of Amazon’s union-busting campaign is the best evidence we could hope for that they know the power of their workers, and that they fear it. 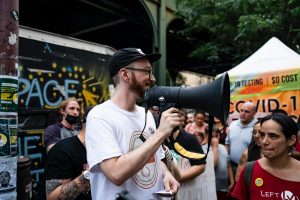