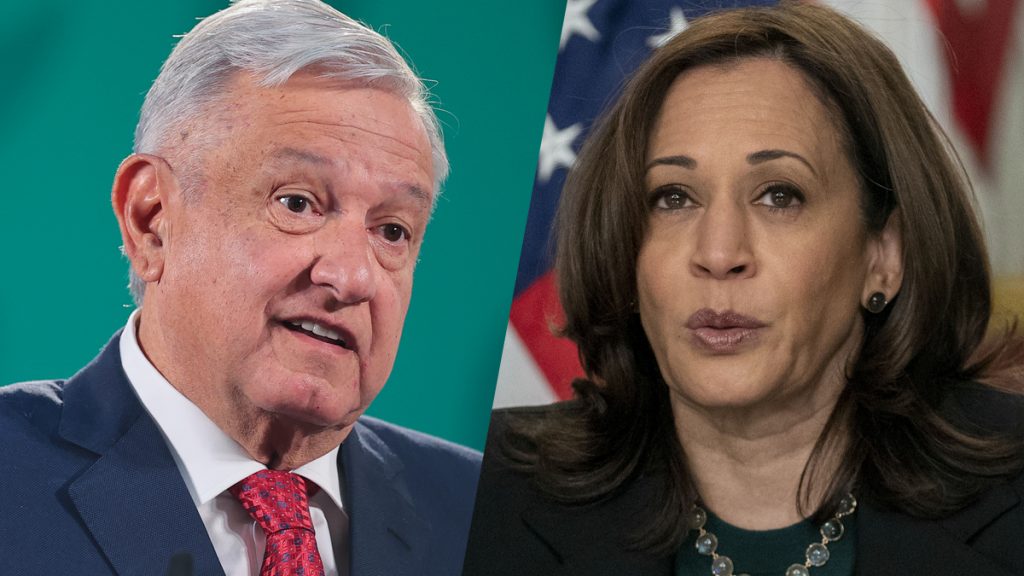 “There is willingness on our part to join forces to combat human trafficking and protect human rights, especially those of children,” said Mexican President Andrés Manuel López Obrador (AMLO) about his meeting with U.S. Vice President Kamala Harris.

The situation of migrant minors locked up in detention camps under inhumane conditions in the United States has become a real crisis for the Biden administration. The new U.S. president has responded to the increase in migration the same way that previous administrations have: through mass deportations of adults, confining minors, and increasing the militarization of the border in Mexico, making AMLO the one to stop migration at the southern border.

The recent caravans of thousands of migrants are driven by a combination of factors — including poverty, violence, the ravages of the pandemic, and natural disasters — that force them to flee their places of origin. They have also been driven by the deepening effects of the current economic crisis in Central America. Migration is on the agenda in negotiations between the Mexican and U.S. governments.

The Biden Administration is facing a dilemma on migration. On the one hand, the Biden administration gave migrants hope and encouragement with a “progressive” speech about cooperation at the border. On the other hand, it has asked them not to take risks and not to come to the United States. Additionally, Biden has maintained a Trump-era border policy — accepted by AMLO —  to deport thousands of migrants immediately and contain them in Mexico while accepting most unaccompanied minors almost immediately. This has ended up separating entire families, with no clarity as to what the plan is for these children.

What has changed in terms of border and migration policy under the Biden Administration compared to the Trump administration? What is the Mexican Government’s position? Below, we reveal the continuity between the approaches of the U.S. governments, both Republican Trump’s and Democrat Biden’s, in the face of the negotiations that were resumed with Mexico.

Bilateral Negotiations with the Same Objective

One of the Biden administration’s main actions in its joint plan with Mexico on migration is putting Kamala Harris in charge of negotiating migration issues with Mexico and the “Northern Triangle” (El Salvador, Guatemala and Honduras), to end the migration crisis. “She is the most qualified person … to stop migration on our southern border,” according to Biden.

It is worth noting that Kamala Harris has proudly called herself a “top cop” and held the record for the number of incarcerations during her work as California prosecutor, while refusing to prosecute Catholic priests accused of sexual abuse. In addition, she strengthened the penalties against poor and marginalized sectors, but never set out to combat the corruption of high ranking officials and big business.

The current U.S. regime is betting on stopping migration from the southern border and containing deported migrants in Mexico. For its part, the Mexican government has requested that the United States make a greater effort to “promote the well-being” of the Central American countries and the southern border through the policy implemented two years ago through the Comprehensive Development Plan under the direction of Laura Elena Carrillo, executive director of AMEXCID, the Mexican Agency of International Cooperation for Development.

These are only palliative measures, however. The Biden administration is continuing to implement the core policies of the Trump era, although with more “friendly” rhetoric. As part of his proposals for immigration, Biden aims to spend millions of dollars on private investments to discourage migration to the United States and maintain the precarious and exploitative conditions of semi-slavery. This goes along with increasing violence and poverty in these countries, in accordance with U.S. imperialism and international organizations such as the IMF and World Bank, which are responsible for forcing poor and working class people across the world to pay for their countries’ punishing indebtedness.

Although both the U.S. and Mexican governments share the same objectives and have agreements to carry out a joint plan of “effective and humane action” in managing migration, in practice they have begun to accept each other’s demands. They are supposedly providing aid to Central America to keep migrants in their countries with repressive governments, performing military drills, maintaining militarized borders, and denying full rights to migrants, all while absolving themselves of responsibility.

The Trump administration has agreed to invest $4.8 billion as part of the new migration plan based on private investment in Central America and an increase in “aid” to these countries. Under the agreement, Mexico would take in migrants during the duration of the asylum process.

Trump thanked AMLO in 2019 for his cooperation in placing 27,000 troops on the border, with AMLO rejecting an open borders policy for migrants. However, while Mexico began to militarize the borders, the “aid” programs to Central America were not carried out. They were suspended under the pretext of the health crisis, and a lack of resources.

The Biden administration announced in January that it would commit to allocating $4 billion to Central America, emphasized in the recent meeting between Harris and AMLO. But these plans, designed as they are to provide cover for further repression of immigrants, are wholly insufficient to “rebuild” the countries subordinated to imperialism, devastated by hurricanes and natural disasters, and plunged in deep poverty and high levels of violence as a result of the economic plans imposed by the United States.

Free passage to All Migrants!

While the top officials of the five countries — Mexico, the United States, and the Northern Triangle — agree on “aid” plans, they have simultaneously disavowed their responsibility for the crisis, refused to guarantee full rights for migrants, and have forced the poorest sectors to pay for the economic collapse through further austerity and violence. Without policies to counteract the exploitation that deepens poverty in these countries, thousands of Salvadorans, Guatemalans, Hondurans, Haitians and other nationalities, including minors, will continue to be stranded on the southern and northern border of Mexico.

We must not forget that we have a very important fight to wage in defense of our migrant brothers and sisters. We must promote this fight on both sides of the borders, through a movement led by the workers, the multiethnic working class of the United States, and the Mexican labor movement, independent of the different governments.

In the face of the anti-immigrant policy of the Mexican government and its subordination to Washington, we need the broadest solidarity of the exploited and oppressed of Central and North America with the migrant families fleeing violence and misery in search of a better life. We must demand free transit and automatic residency as soon as they set foot on the territory of other countries. This must be combined with an anti-imperialist and anti-capitalist perspective.

First published in Spanish on April 8 in La Izquierda Diario.