On Monday, Andrés Manuel López Obrador celebrated his first Independence Day as president of Mexico. AMLO promised an end to corruption and neoliberalism, awakening the hopes of millions of Mexicans. But he has mostly collaborated with Trump in stopping immigrants from Central America. 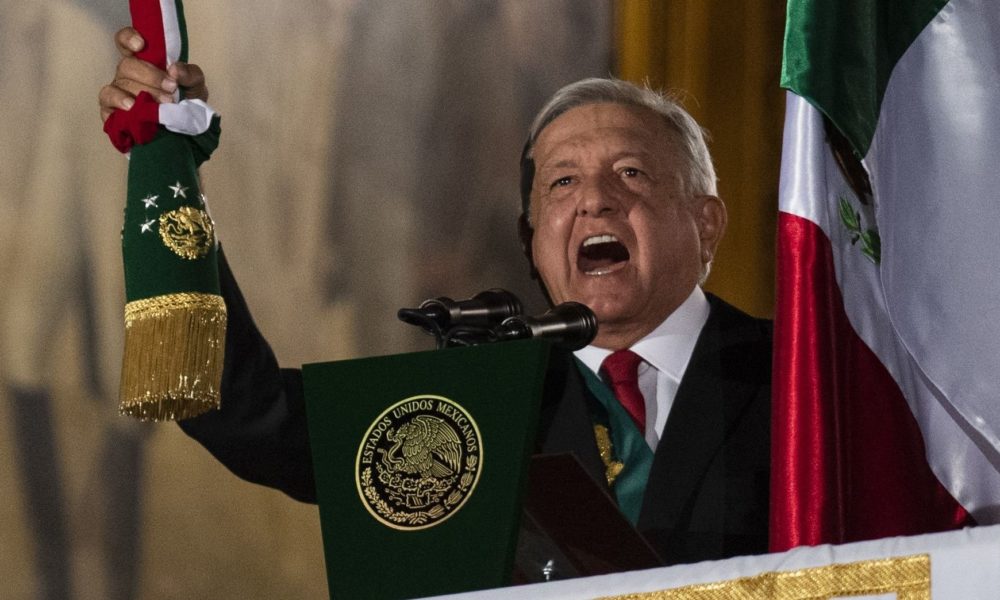 As soon as Andrés Manuel López Obrador (AMLO) was announced as the big winner of Mexico’s presidential elections on July 1, 2018, thousands of people took to the streets of Mexico City to celebrate. For the first time in decades, people saw a candidate they perceived as “one of them” triumph. On top of that, the victory was fair, and no electoral fraud was detected.

In Mexico, jokes about electoral fraud are common. In 1988, for example, as votes were being counted, the power went out “coincidentally,” and suddenly Carlos Salinas de Gortari had more votes than his left-wing opponent. “The system collapsed,” they said. Soon, “the system collapsed” was used as a funny reference for all kinds of sketchy situations with weird outcomes.

AMLO’s first run for the presidency way back in 2006 was also marked by fraud. After serving as Mexico City’s head of government, he was widely expected to win the presidency. The conservative party PAN released several attack ads arguing he was “a danger for Mexico” and would turn it into a second Venezuela.

The election led to a close result, with López Obrador losing to the conservative Felipe Calderón by a mere 0.61%. AMLO demanded a recount and organized a two-month blockade of the Paseo de la Reforma, one of the main avenues of Mexico City, with the slogan “vote by vote and ballot by ballot.” The first Mexican internet memes were born around that topic: There soon appeared video parodies of Madagascar’s “I want to move it move it” and Barney the dinosaur singing lyrics against AMLO and his followers.

López Obrador finally conceded in 2006, but in 2012 he was once again the left-wing candidate. This time he used less “dangerous” rhetoric about a “republic of love.” Once again, he lost.

But the administrations of Calderón and Enrique Peña Nieto had disastrous results: Thousands of people were murdered at the hands of organized crime, the army and the police, with hundreds of disappeared. This time, it was widely expected that AMLO and his party (the National Regeneration Movement or MORENA) would win. John Oliver explained that AMLO’s competitors were not viable candidates.

But the third time is the charm. This time, the system did not collapse, and there was no need for a recount. Over 30 million people (53% of voters) cast their ballots for AMLO. Is it any wonder that thousands took to the streets to celebrate?

López Obrador declared that his government was a “fourth transformation” (abbreviated as “4T”) for Mexico. The three previous transformations, as he saw them, were the Independence movement of 1810, the Juárez Reform of 1857 and the Mexican Revolution of 1910.

But the honeymoon did not last long. Once AMLO took office, his real administration began. The first thing he declared was a season of “republican austerity measures,” arguing he would cut his own salary in half, as well as those of high-ranking public officials. He turned the Los Pinos presidential residence into a museum.

His more ambitious promises, however, were not kept. AMLO maintained Calderón’s strategy of militarization and created a National Guard with personnel from the police and army corporations, as well as unemployed youth seeking good salaries. This was allegedly to combat organized crime. The National Guard was at first going to be headed by a civilian (to appease the population and human rights NGOs), but is now under the command of army officers. Its commanders earn as much as US$8,325 while AMLO earns US$5,565. Even a private in the National Guard earns US$932, which is six times more than an average Mexican worker.

What the Fourth Transformation Means for Workers

Public institutions have been subject to severe budget cuts. The National Forest Commission was one of the first victims. Its lack of funds prevented it from controlling wildfires in Mexico last spring. 20 took place in Mexico City alone, causing so much smog that the city smelled like burned wood for days.

Workers of the National System for Integral Family Development (DIF), the institution that organizes foster homes, schools and summer courses for impoverished children, were also affected. Over 300,000 layoffs were announced, mostly of freelance workers who barely earned the minimum wage of US$310, and many whom have worked under such conditions for decades. Meanwhile, the DIF’s top bureaucrats earn 10 times as much.

AMLO’s claimed that his budget cuts would go “from top to bottom,” but they ended up being the other way around. DIF workers, as well as workers of many Mexico City museums have been fired. Many report that they are being replaced by precariously employed young people fresh out of university.

Young people in Mexico have a hard time finding a job after graduating from university, and AMLO’s “solution” is threefold: Either give them a “grant” of US$150, have them do community service for US$400, or let them join the National Guard. So when young people seek jobs, the government either makes them join their new repressive apparatus or gives them jobs replacing “unnecessary” workers—and earning half their salary. This allows the authorities at these institutions to grant themselves a raise of 5.7% while claiming that they’re only firing workers in “no show” jobs. The government also started a media campaign against protests by laid-off workers, claiming they were sketchy people close to corrupt politicians. Moreover, the recent cases of rapes committed by police against women in Mexico City sparked protests against the government’s cover-up.

When journalists pointed out that employment had decreased, López Obrador replied, “I have other data,” which is the Mexican version of Trump’s “alternative facts.” The two presidents have more things in common than differences.

With Trump, Against Immigrants

AMLO has become a close ally of Trump. After thousands of Central American migrants crossed Mexico’s southern border, a crisis was ignited in the region. Trump threatened López Obrador with tariffs if he could not control the surge of people trying to reach the United States.

As president-elect, AMLO had promised that migrants would be treated with dignity, that he would give them a sort of green card, allow them to work part-time jobs and have background checks and coordinate actions with NGOs for the search of disappeared migrants. Mexico was going to be a mediator between Central America and the United States, establishing channels of communication for legal migration.

But these promises went unfulfilled. Instead,  López Obrador obeyed Trump’s commands. He sent the newly created National Guard to intercept the migrant caravans. There have been several instances in which AMLO’s real measures have caused outrage among left-wing sectors and activists who closely follow migrants to ensure that they safely reach the border.

In shelters in Chiapas, Haitian migrants were detained by the National Guard. A Haitian mother with her two young children cried as she peeked beneath the gate telling journalists about her plight in broken Spanish. “Please! Please help me! My son is sick. Suffer for days. Send me a bit of food! Help me!” she said as she was removed from cameras by the National Guard.

This scenario also plays out Mexico City. Migrants that reach the shelter located in the Iztapalapa borough are crowded together in inhumane conditions. Journalists and NGOs have reported the detention centers “they look like jails” and that children (many of them unaccompanied) sleep on mattresses swarming with ticks and bedbugs.

The scandals that Obama and Trump had to face regarding migrant children are still ongoing, only they have now been sent—in a macabre twist on the hot potato game—to AMLO and his National Guard, who act as a Mexican branch of the U.S. Border Patrol.

It was always clear that MORENA would betray its promises. As we wrote last year:

There is nothing progressive to be found in a party that seeks to usurp social discontent and transform it into electoral slogans. … MORENA, by not questioning the character of this regime at the service of transnational corporations to the end, cannot provide a comprehensive response to working people and youth, with their aspirations for change.

This contrasts with sectors of the left who believe that the capitalist state can be reformed. Jacobin magazine, for example, argued recently that the left must support AMLO’s project if it wants to really defeat the right (“AMLO Can’t Do This Alone”). AMLO, unfortunately, is an enemy of workers in struggle. When maquila workers went on strike earlier this year, the mayor of Matamoros, who is a member of MORENA, took the bosses’ side. AMLO and his party made clear which side they’re on. The article in Jacobin concludes:

The Mexican left’s project will only prosper if it succeeds in converting MORENA from a vehicle for campaigning and career advancement into a genuine tool for political education and popular democracy. In the world system of today, there are no second chances.

And therein lies the problem: MORENA is not a “tool for political education and popular democracy,” but a vehicle designed to channel discontent into legal channels. It is the regime’s firefighter, hosing down any social explosions. It tells activists, “Don’t demonstrate. Wait for the next election and vote for us.” It co-opts social movements by turning their leaders into wealthy parliamentarians.

AMLO declared that neoliberalism has been abolished. But in his first year in office, he has repeatedly demonstrated that his goal is to maintain the status quo built by the previous neoliberal administrations.

On the other side, the right-wing opposition is in disarray, and the president’s approval ratings, although lower than last year’s, are still over 70%. Demonstrations called by reactionary sectors (nicknamed “fifís” and “whitexicans”) against AMLO’s measures gathered no more than a few hundred people.

The mass movement and the left in Mexico are faced with the task of building a party for workers, youth, women and LGBTQ+ people, one that takes a stand against the government attacks and layoffs. For this it is necessary to break with López Obrador, MORENA and his “fourth transformation”—which is un willing to transform the neoliberal status quo, much less the capitalist system.