The Women’s March took place on Saturday, October 2. But if you looked at the signs and heard the speeches, you would think Trump was still President. 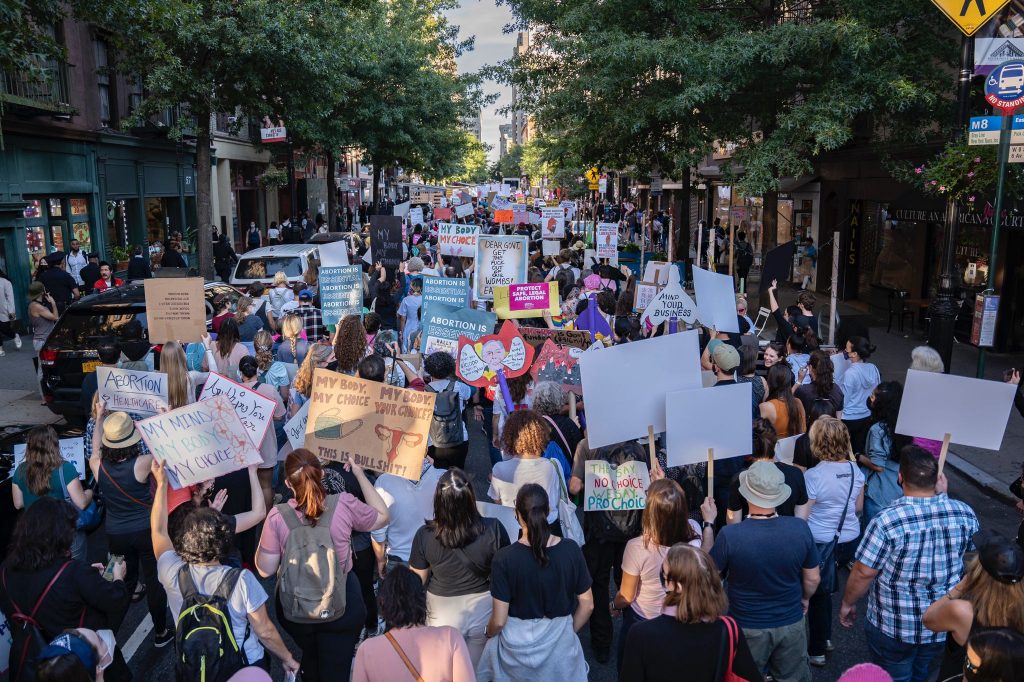 On Saturday, October 2, tens of thousands of people mobilized in over 600 marches across the country as part of the “Bans Off Our Bodies” National Day of Action organized by the Women’s March. The numbers and enthusiasm highlight a real desire to fight back against attacks on abortion rights.

While the Trump years were characterized by countless large protests, this was the biggest nationwide day of action during the Biden administration so far. But it paled in comparison to the 2017 Women’s March protests that took place soon after Donald Trump’s inauguration and brought out over four million people to the streets.

In New York City, several thousand people took to the streets on Saturday to demand the protection of abortion rights across the United States. There were smaller marches planned in Brooklyn and Queens earlier in the day, but they eventually converged with the action in Manhattan, making it the largest action in the city. People held signs that read “Abortion is healthcare and healthcare is a right” and “We are not going back.”

These mobilizations were in response to the recent passage of S.B.8 in Texas, a draconian anti-abortion legislation which bans abortion after six weeks of gestation, effectively outlawing around 85 percent of abortions performed in the state. In addition, anyone can bring a lawsuit against someone who has an abortion or helps someone access one, effectively placing a bounty on anyone seeking or performing an abortion.

The protests were held days before the start of the Supreme Court’s new session, where the Court will hear a case that will revisit Roe v. Wade. One only needs to look at the precedent set by Texas to see that abortion rights are in danger across the country.

It is in response to these dire circumstances that tens of thousands took to the streets on Saturday.

In New York City, like around the country, many of the speakers represented various non-profits and electoral offices. Representatives from organizations such as the Progressive Voters’ Guide and the New York Civil Liberties Union took to the stage. Democratic party politicians like Rana Abdelhamid who is running for New York’s Twelfth District in Congress spoke as well, along with Carolyn Maloney who has been an elected Democrat in Congress since 1993. Almost all of the speakers highlighted the need to vote Democrat in the midterms — which is over a year away — as if the Democrats didn’t already control both houses of Congress and the Presidency.

There was a sense of complete disorientation in the speeches and the protest signs. After all, in the last four years, many had not only voted blue and gotten Trump out of the White House, but had also flipped the House and the Senate. The “villain” of the 2017 Women’s March was (at least temporarily) defeated. And yet, attacks on abortion have only increased.

In that sense, speeches and signs were deeply anachronistic — they called out Donald Trump, who is no longer in office, memorialized Ruth Bader Ginsburg with chants like “Ruth sent us,” and called on people to vote as if they hadn’t just done that exact thing.

Yet, the strategy to take their “power to the polls” as championed by Women’s March hasn’t stopped the attacks on abortion rights. In fact, according to the Guttmacher Institute, in the first six months of Biden’s Presidency, more abortion restrictions were enacted by state legislatures than in any previous year.

Voting Blue is not an effective strategy to stop attacks on abortion. It just isn’t.

And although nearly all attacks have been passed by Republicans, the Democrats don’t have their hands clean either. Democrats insist on continuing to “vote blue”, using current examples of attacks on abortion rights by Republicans to boost their campaigns. Yet, historically, the Democrats have also passed attacks on abortion rights, including the Hyde Amendment which bans federal funds for abortions. Passed by Democratic president, Jimmy Carter, the Hyde Amendment ensured that abortion was no longer easily accessible to working class people. Carter, when supporting the Hyde amendment said,

Well, as you know, there are many things in life that are not fair, that wealthy people can afford and poor people can’t. But I don’t believe that the Federal Government should take action to try to make these opportunities exactly equal, particularly when there is a moral factor involved.

In fact, until recently, current president Joe Biden was a vocal supporter of the Hyde Amendment. And now, there are two anti-abortion Democrats in the Senate who would bar any abortion legislation from passing, even without the filibuster. These aren’t anomalies: even now, while capitalizing on public anger, the Democratic Party, including its progressive wing, has looked the other way on abortion when trying to build their ranks, with Bernie Sanders campaigning for anti-abortion Democrats.

The New York Times framed the Women’s March as “an early test of Democratic enthusiasm in the post-Trump era.” And indeed, that is what it was, with the protest largely serving as an electoral rally to rev up support for the Democratic Party.

This is what we mean when we say that the Democratic Party is the graveyard of social movements: it turns legitimate anger and street protests into electoral campaigns. It convinces demonstrators that protests are nothing more than pressure campaigns for politicians or a way to galvanize an electoral base. That’s the story of the Women’s March which went from mobilizing four million people in the streets to marching under the slogan “Power to the Polls” a year later. And that’s the lesson Women’s March organizers, tied to the Democratic Party, want people to believe — that our power is at the polls.

But that’s not what the most effective protests are. The most effective protests are a huge show of our power in the streets, of people, united.. Protests are a step in the direction of the self organization of the masses, towards fighting for and winning our demands — goals they can achieve if the movement isn’t co-opted into the dead-end electoralism of the Democratic Party. Above all, protests can spread energy and enthusiasm to the ranks of the working class where we can use our most powerful weapon, the strike, to impose our strength and win our demands.

Indeed, nothing but struggle has ever won major concessions from the capitalist state.

In New York City, much of the Left brought contingents to the Women’s March, mobilizing their ranks and periphery to rightfully fight against the attacks on abortion rights. However, the largest socialist organization in the country with a paper membership of over 85,000, the Democratic Socialists of America (DSA), were conspicuously absent. The DSA refused to mobilize for the march, instead calling on it’s members to donate to abortion funds instead. In the days leading up to the day of action, the Socialist Feminist Working Group released a statement saying that “the Working Group cannot say in good faith that socialist feminism will be fought for at the march.”

Indeed, the Women’s March has a lot of problems — many that are in fact, now shared by the DSA: bringing a movement into the fold of the imperialist, sexist party of capital, the Democratic Party. But the attacks against abortion rights are a reality and the only way to fight back is to be in the streets. To win, we have to take to the streets alongside with the tens of thousands who came out on Saturday — many of whom we likely don’t share a program with — and push for stronger mobilizations and labor actions that aren’t subservient to the Democratic Party, but rather use our strength in the streets and workplaces to not only defend abortion, but win more.

Saturday’s mobilization was a start and showed a will to fight. But it’s not enough. To fight for the right to an abortion, we will need to have more protests with more people — a real mass movement. We will need our unions and community organizations to mobilize their ranks in defense of this basic right. And this means combatting the notion that the Supreme Court or Democratic party politicians can save us or protect our bodies and our lives.

This isn’t political dogma but proven historical fact. They will not, the cannot, and they are not defending abortion rights. In order to defend all those who need abortions and all health care workers who perform them, we must reject the beckoning hand of the Democratic Party and build a mass movement in the streets and in our workplaces, harnessing our power as workers to demand that there be no bans or restrictions on our bodies or our bodily autonomy.