An Atmosphere of Lynchings as Nazis March in East Germany

Scenes from a nightmare: Thousands of Nazis marching through the city of Chemnitz in East Germany, giving Hitler salutes and attacking people who do not look “German” enough. How could this happen? And how can we stop it? 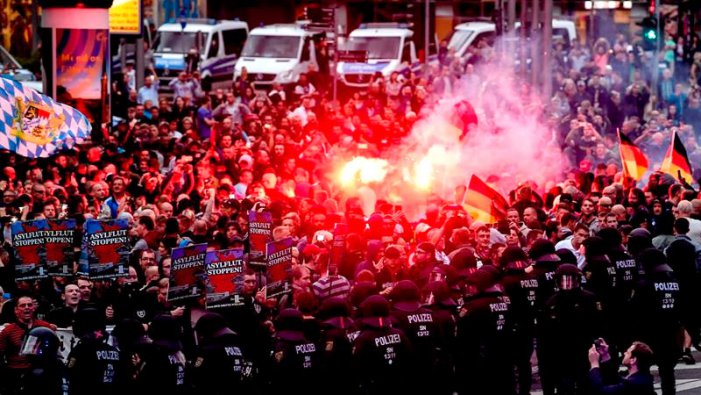 On Monday evening, up to 5,000 Nazis demonstrated through the East German town of Chemnitz. Unhindered by police, they gave Hitler salutes, shouted Nazi slogans (“German, social and national!”) and attacked people they thought looked like “foreigners,” leftists or journalists. At least 20 people were injured, with xenophobic violence continuing late into the night. Refugee associations encouraged black and brown people to avoid the whole downtown area. There was an air of pogroms, to use a European comparison, or perhaps of lynchings, the American equivalent.

The Nazis claimed they wanted revenge for a killing that had occurred two days earlier. On Saturday evening, a fatal stabbing had taken place at a Chemnitz city fair. Two men were seriously injured with a knife, and one of them died that night in hospital. The suspects are a Syrian and an Iraqi man. For right-wing soccer hooligans, this constellation was enough to mobilize on social media.

On Sunday afternoon, upwards of a thousand racists took to the streets. “For every murdered German, one dead foreigner!” was one of their chants. The first depressing irony of this story: The racist gathered around a huge monument of Karl Marx – Chemnitz’ most famous monument was erected under the German Democratic Republic.

The second depressing irony: The stabbed man, Daniel H., was an antifascist. In his Facebook profile, the carpenter – son of a German father and a Cuban mother – presented himself as a fan of punk rock and leftist politics, even using the old East German name for his home town: “Karl-Marx-Stadt.”

The Alternative for Germany

The 5,000 Nazis from across Germany included different fascist groups, but also the mainstream right-wing party “Alternative for Germany”. The AfD won 12 percent in the last national elections and is currently the largest opposition party in parliament. AfD leaders Alexander Gauland and Alice Weidel have defended the violent mobs as a legitimate protest against a wave of immigrant criminality (which is entirely made-up).

These protests mark a turning point for the AfD, which has been lurching continuously to the right since its foundation as a right-liberal party five years ago. The AfD was launched by neoliberal economics professors. But from the beginning, it has offered Nazi cadre a space to organize. Now, pretenses of bourgeois respectability are being dropped, as the open fascists have taken over.

In late May, the AfD attempted to organize a respectable demonstration in Berlin. It was a disaster. All their top leaders could not mobilize more than 3,000 supporters, surrounded by 70,000 counter-protesters.

Now, in Chemnitz, we are witnessing a fusion between fascist street gangs and the AfD. The leader of the AfD’s right wing, Björn Höcke, the party leader in Thuringia, is now calling for a demonstration in Chemnitz this Saturday.

Politicians from across the political spectrum – from the conservative CDU of Angela Merkel to the social-democratic SPD to the Green Party to the left-wing DIE LINKE – have claimed that the police in Chemnitz were “overextended” or “overwhelmed.” On Monday, just 591 officers were present to corral the thousands of Nazis. The head of Saxony’s police explained that they had underestimated the right-wing mobilization. But is that credible? Every time a few hundred anti-fascists try to mobilize in a Saxon town, the police show up with SWAT teams in military fatigues with automatic weapons. They recently acquired military tanks!

The reason that the police in Chemnitz could not stop the racist mob was quite simply that they did not want to. The police are “blind in their right eye”, as an old German communist expression goes. Germany’s police apparatus is full of right-wing and fascist sympathizers. This was made clear to the whole country a week before the events in Chemnitz.

In Dresden, journalists from the public broadcaster ZDF were filming a right-wing demonstration against Angela Merkel. A man with a hat in the colors of the German flag began to harass them, claiming they were not allowed to film him. (Not true, according to German media law.) His friend then went to the police and tried to press charges against the journalists. The police, who had watched the harassment passively, proceeded to detain the journalists for 45 minutes. Over the following days it was revealed: The friend was René S., a leader of the right-wing terrorist group Gruppe Freital. And the harasser was Maik G., an employee of Saxony’s provincial police!

The case of Maik G. was just the tip of the iceberg. Officers of the Bundeswehr (military) were planning to carry out terrorist attacks (and were subsequently pronounced not guilty). Informants of the Verfassungsschutz (internal secret service) were all around the right-wing terrorist group National-Socialist Underground (NSU), who were able to murder nine people over a decade. The list goes on endlessly.

When the Saxon police got their military tanks, it was revealed they had gotten them embroidered with a logo in Nazi-style German runes. The idea that giving more resources to these police will somehow stop Nazis is completely absurd. They will only be used for ever-more repression against the left, as we saw with the mobilization of 30,000 officers to protect the G20 summit in Hamburg. More police means more Nazis.

The situation in Chemnitz is a result of the restoration of capitalism in East Germany after the collapse of the Stalinist regime in 1989-90. The privatization and dismantling of the nationalized industries meant that whole regions were abandoned to mass unemployment and hopelessness. Young people, especially women, escape the East as soon as they can. This is the environment where racism reaches levels of mass psychosis – paradoxically in areas where there are almost no refugees or foreigners at all.

West Germany’s state apparatus helped this development with racist policies and barely-veiled support for fascist gangs. The integration of East Germany into the “free society” of the West was inaugurated with a pogrom against Vietnamese immigrant workers in Rostock-Lichtenhagen in 1992. Since then, especially the Saxon government under the conservative CDU has given Nazi groups free reign for decades.

The Nazi mobs and the AfD, which each day are harder to tell apart, are a threat to all immigrants and refugees. But they also have their sights on the workers’ movement as well: Nazi gangs have attacked trade union demonstrations on May 1, while two AfD functionaries recently tried to strangle a trade unionist to death. At times, the AfD tries to present itself as a “social” party that defends “the little guy” (as long as the little guy in question is of German origin). But the simple fact is that Germany’s working class today is entirely multi-ethnic.

The working class in Germany needs the broadest possible united front to defend itself and its most vulnerable members against the growing threat of pogroms and lynchings. Too many reformist leaders want us to place our hopes in the police, the courts, the established political parties – i.e. in exactly those forces that let the AfD become so strong in the first place. We need to trust ourselves and have all our organizations, parties and trade unions mobilize together, to defend workers of all ethnicities and nationalities. By setting up such a front, we can also begin a serious struggle against precarious working conditions, layoffs and the misery that have allowed fascism to raise its head.

Yes, looking at pictures of the hate-filled hordes in Chemnitz, it is easy to feel despair. The scenes from the last few days are more than a warning signal. This is the beginning of a real mobilization that will not just stop the Nazis, but also get rid of the rotten system that created them!