During his sixth press conference at the Elysee, Francois Hollande has just formalized what was being said in ministerial corridors for several days. Starting today, French reconnaissance aircrafts will fly over the Syrian territory and raids could begin as soon as possible. France will for the time being coordinate “its efforts” with the anti-Daech international coalition – to bomb not only the positions of the Islamic State in Iraq, but also, from now on, Syria. A response to the flow of refugees by tackling the “root causes”, or the officialization of a new imperialist disaster, already announced? 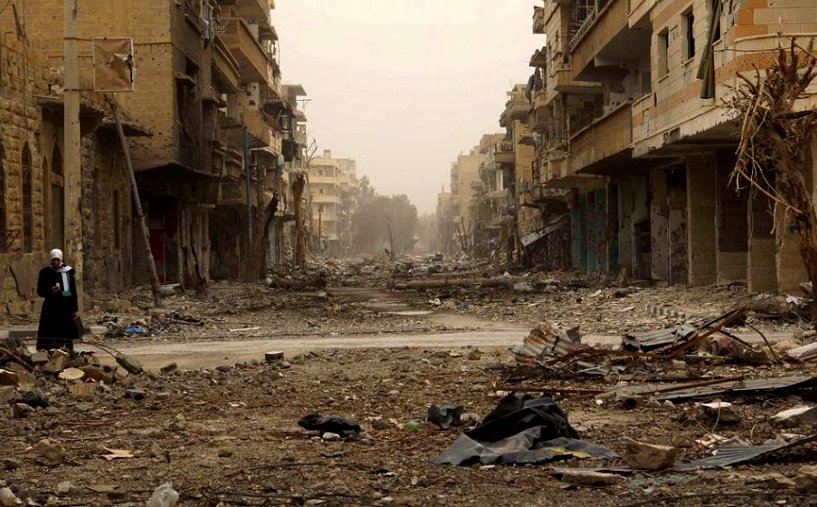 Hollande and his Minister of Foreign Affairs Laurent Fabius had advocated for air raids against Syria’s Bachar Al Assad after the Damascus regime had bombed civilians with chemical weapons during the summer of 2013. They had been forced to back off when Washington withdrew, afraid to get bogged down in a new conflict in the Middle East. Since then, the situation has changed with the creation of the “anti-Daech Coalition” in the Summer of 2014, led by the United States, its Western allies and its regional cops – the Gulf countries in particular. But the French hunters intervened so far only in Iraq, still bitter after having been dropped by Washington in the middle of a military campaign the year before. So far, Paris refused to participate in strikes on Syrian territory, arguing that it would objectively help the Syrian dictatorship.

Time has passed, and even though Barack Obama has chosen to refocus US imperialism on the Pacific area, Washington is still present in the region. What comes to mind is of course the Iranian issue, which shows the will to normalize 26 years of disagreements with Teheran. Let’s also mention the renewal of Amercian interference. After the «withdrawal of troops from Iraq» undertaken by Obama early on in his first mandate, a new interference was called (to last) in Iraq and Syria. Secretary of State John Kerry suggested that, from now on, Al Bassad should be considered a valid interlocutor to “solve the issue of the Syrian Civil War” and of Daech.

While overplaying the hard line, Fabius eventually added some water to his wine. On the Iranian nuclear issue : after having pretended to block the last round of negotiations, Paris finally stepped into line with Washington and a number of French stock holders in the car (PSA) and oil (TOTAL) industries – more than happy to reinvest in the Iranian market. As for the Syrian issue, it has been the same story over these last months. Fabius displayed some kind of assertiveness, swearing to the gods that “Bashar was the problem and not the solution to the problem”. But Hollande has just formalized his backtrack.

Unable to remain isolated on the Syrian issue with regards to its imperialist partners and competitors, Paris is thus taking a step fowards – and taking advantage of the growing refugee crisis to do so. This decision is scandalous for more than one reason.

Even less so than other Western powers, France is poorly placed to lecture about humanism and democracy in Syria. When Paris was the mandatory power in Syria-Lebanon after the First World War, the French colonial troops were responsible for repeated massacres against the Syrian national movement and against the population – particularly during the “Druze revolt” between 1925 and 1927. The expeditionary force and colonial officers of the homeland of human rights at that time wouldn’t much envy the abuses by all sides of the conflict, now taking place in the region. Even today, would we entrust to an army committing serial rape of minors – as in Central Africa – the task of liberating anyone ?

Concerning the refugee issue, it is clear that Daesh going into total war has caused a massive influx of IDPs and refugees, especially towards countries neighboring Syria and Iraq – beginning with Lebanon, Jordan and Turkey, which support the largest number of refugees (infinitely greater, proportionally, to the 24,000 Hollande said he wanted to accommodate in the next two years). But the increase of forced exile to escape war and poverty truly began with the multiplication of imperialist interventions in the Arab-Muslim world ; since Afghanistan in 2001 until Lybia in 2011. It’s especially since that date that the number of candidates for forced exile began to grow. The fact remains that the US and its partners have widely contributed to the emergence of Daesh. Before the Anglo-American intervention in 2003, nor Al Qaeda in Iraq nor Daesh existed. Moreover, several Anglo-Saxon media outlets, including The Guardian, have recently reported that the American Defense Intelligence Agency (DIA) had signalled in 2012 the potential emergence of a ’Salafist principality’ on Syrian territory – which the US government considered to be an opportunity to strategically isolate the Assad regime and Iran, although at the risk of destabilizing, at the same time, Iraq.

Unable to hinder Daesh’s progress, while the regime of Assad is increasingly weakened, Paris and Washington are now ready to collaborate with Moscow at the risk of a complete collapse of the Syrian state – a fear also shared by Riyadh. The military aspect of the whole Islamic anti-state operation is nothing but the coverage of a political outcome the imperialists and Russia have been seeking. It would preserve the main structures of the murderous Syrian regime with a role more or less important to play for Assad. However, Sunni Syrians do not seem ready to accept such a plan, which generates as many contradictions as Daesh benefits.

Faced with the monster they have created, the imperialists have today decided to change their approach. But believing for one moment that strikes on Daesch’s positions – with the resulting “collateral damage”, misconduct and worsening supply problems for the occupied areas where the civilians are held hostage – will “address the refugee problem” and allow candidates to forced exile to stay home stems, in the best case, from blindness. Or from the dirtiest complicity with French imperialism. That is one more reason for the organizations of our class, starting with the far left – and in solidarity with refugees, migrants, and undocumented workers – denounce and oppose this new form of warmonger and Hollande’s military interference.