Ángel Arias: “A Crisis Dumped on Us by Both the Capitalists and Maduro’s Government”

In a speech given at the international rally of the Trotskyist Fraction this May Day, Ángel Arias, a leader of the Workers League for Socialism (LTS) in Venezuela, speaks about how the Venezuelan’s government’s authoritarianism and U.S. sanctions have created one of the worst crises in the country’s history. 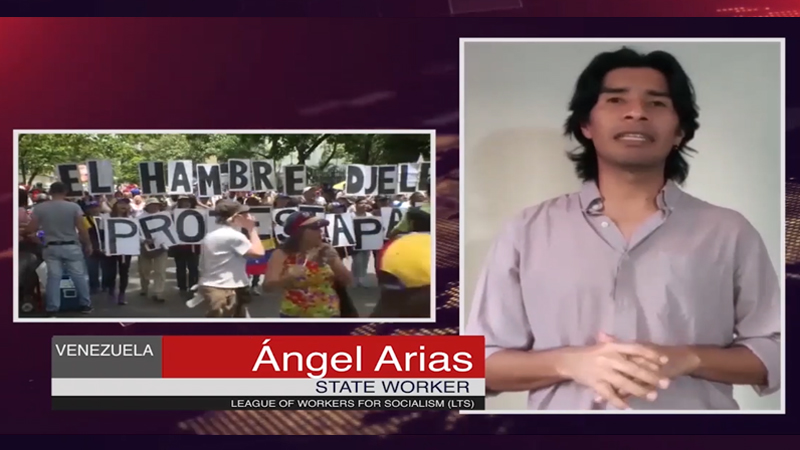 Ángel Arias is a leader of Workers League for Socialism (LTS) in Venezuela and columnist for La Izquierda Diario Venezuela.

The Covid-19 crisis has deepened the people’s suffering, the government’s authoritarianism, and the criminal role of imperialist sanctions. In Venezuela, we are experiencing one of the worst crises in our history, with extensive hunger and misery — a level of crisis only experienced during the armed conflicts of the 19th century.

Before the pandemic, there was already a crisis dumped on us by both the capitalists and Maduro’s government, which is incorrectly called “socialist.” For years the government instituted austerity measures to pay the foreign debt, denying the country resources for food and medicine and leaving public education, universities, public works, and services — including healthcare — in ruins. This led to the collapse of the public health system. They have dealt the working class the harshest blows it has ever felt. Maduro cancelled union contracts by executive order and lowered wages to the bare minimum. He has taken a repressive turn against workers and communities, with a quasi-dictatorial regime that imprisons workers, uses the military against us, and has its hands stained with the blood of the poor. And Maduro calls himself a “workerist!”

Imperialist sanctions were imposed by Washington with the aim of instituting a puppet government in Caracas. They confiscated national companies, withheld Venezuelan revenue, blockaded Venezuelan oil, and sanctioned countries who traded with Venezuela. It’s a criminal policy, and clearly a blatant, disgusting imperial attack, whose objective is to strangle the Venezuelan economy and deepen the hardships of the working class, in order to create the conditions for a regime-change orchestrated by the U.S. And the United States has the nerve to talk about “democracy!”

This was the situation in Venezuela even before the pandemic, during which all of these problems have worsened. Increasingly people are going hungry and uprisings against food shortages are met with government repression, which has already claimed one life and imprisoned dozens more. The Trump administration, further demonstrating the rottenness of imperialism, has not not only sustained but also deepened aggressions and sanctions against Venezuela, worsening the severe fuel crisis, which affects the production and distribution of food. AriasAlongside the right-wing opposition, they come after us to talk about “humanitarian aid!” Cynics and misers!

The working class is in a difficult and precarious situation, not only because of the enemies in front of us, but also because our organizations are weak. We must continue to resist and try to recover our forces. Today we have to fight against the scourge of hunger, which threatens to spread. That’s why we need to fight for an unconditional end to imperialist sanctions and forge a workers’ and people’s alliance, fighting for neighborhood and workers’ committees that distribute food and set prices. Workers at food companies must control production. This would open the way for workers’ and people’s power against the bosses who profit from the hunger of the people, and against the corrupt and authoritarian bureaucracy of this capitalist government.

We have to be clear. This is the crisis of a capitalist economy and regime. This is one of our key tasks: to clear the name of socialism which has been dragged through the mud. Socialism is not represented by a civic-military class that has become the new bourgeois and that is profoundly anti-worker.

It is within this framework that our participation in this event, and more specifically our membership in a revolutionary internationalist organization, is incredibly important. Considering the current weakness of the Venezuelan working class, it is crucial to have an internationalist perspective, in alliance with the struggles that our working class brothers and sisters have been waging against the capitalists and their governments throughout the world, and in particular in Latin America.

From these struggles will emerge the conditions for the resurgence of the Venezuelan working class’ fighting spirit and the ability to reorganize the forces of a truly anti-capitalist left made up of workers.