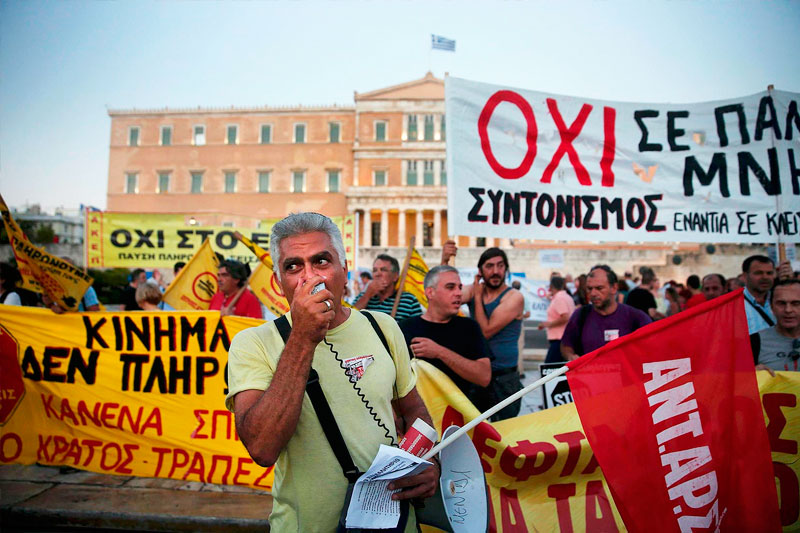 If the result of the elections in January expressed the hope (along with the illusions it included) of the working class for abolition of the memoranda and austerity through the parliamentary route and a “Government of the Left”, the same, more or less, result in the election of the 20th of September has a totally different meaning: it depicts the limits of the working class’ movement until now. The victory and the only slight weakening of SYRIZA a few weeks after it introduced the 3rd memorandum show that a big part of the workers accept that, for the moment, there is no alternative. At the same time, the transformation of SYRIZA is maturating, as the party got rid of its left wing, as well as of the (not so big anyway) older makeweight it had in the trade unions, with quite a small cost.

The working class regions voted massively for SYRIZA one more time. It was not the small promises or the ridiculous excuses SYRIZA pointed out that made them do that, as much as their hatred for the right-wing, PASOK, and in general the old memorandum governments. This totally justified hatred, though, is not enough to make the result look positive. The typical proportion of the percentages of the left and right are in favor of the former, but this is of little importance in front of the fact that a left party which is in the government takes the jurisdiction to implement, in collaboration with the nationalist right-wing ANEL, a program of austerity and reforms in favor of the profits of the national and international capital.

In front of the result of the election, though, there is no point neither in sadness and pessimism, nor in made-up optimism. The problem for the revolutionary left is to conceive the new conditions, not to cry, neither to smile, but to put the current duties in order. Instability will continue and nothing is over yet.

The big percentage of abstention expresses more disorientation and disappointment than a specific ‘’political message’’. At the same time, though, it shows that acceptance of the memorandum as an inevitable evil is to a certain degree iconic. Reduced expectation from the electoral result is not necessarily a bad sign, even if abstention as a conscious stance depoliticizes the problem.

The increase of the Golden Dawn in terms of percentage (not in votes, despite the absence of the far-right LAOS from the election) shows that the Nazis came in order to stay. It is true that in the pre-electoral campaign the GD didn’t make but a few public appearances and that the racist hatred against refugees, which the Nazis normally tried to capitalize, was only limited and remained in a regional level. It is also true, however, that the GD has a stable audience and is waiting for its chance. After four years of so important experiences of the antifascist movement, by saying that the GD’s percentage is worrying is the same as saying nothing. We must go back in the streets and eliminate the Nazis once and for all.

The basic problem emerging from the election is that a whole social current, that for years struggled hard and had achieved to overthrow governments and political relations, has taken shelter under Tsipras’ leadership. This leadership makes that part of the society more passive and conservative. The hypothesis that the SYRIZA’s betrayal would automatically lead to its destruction was proven to be naïve. Leaderships have a strong effect on the consciousness of their base. The out-of-SYRIZA left bears part of the responsibility for SYRIZA’s dominance, because of its inadequacy and mistakes, but the biggest responsibility lies on the opposition inside SYRIZA and on all currents who supported it critically and tactically, as it is with their aid that all this social current was given away to Tsipras.

ANTARSYA was one of the few forces in the electoral map that was reinforced in absolute numbers. Its percentage is decent, though substantially lower than its presence in the class struggle, and than the necessities in a time of crisis. The pre-electoral campaign and the alliance with EEK has to be valued positively. Despite some contradictions, it has been a clear move towards a more explicitely anticapitalist orientation than the one in last January.

The choice of ANTARSYA not to join Popular Unity was right, something proven by PU’s campaign. To return to an already outdated discussion for this kind of programmatic and electoral collaborations has nothing to offer today, other than pressures for a conservative adjustment of ANTARSYA.

On the contrary, broad united action of the movement, upon certain practical targets against the new measures, with committees and coordination between all militant forces in the struggle, with the anticapitalist left in its vanguard and its center of gravity out of the parliament, in the streets and in work-places, is what can change social and political relation of forces. Despite the current image given by the election, this relation can change quickly, because there are odjective reasons for the instability of the system. We must not let Tsipras represent the social current born in the crisis. We must not let New Democracy and PASOK come back and Golden Dawn profit more. The time comes for actual insurgency (translator’s note: the actual translation of ‘’insurgency’’ in Greek stands for “antarsia”, a word that sounds the same as the name of our political front).