Workers’ controlled factories in Argentina are taking the initiative in the fight against the Coronavirus. Madygraf, a printing plant in the northern region of Buenos Aires, is the latest factory to retool during the pandemic. 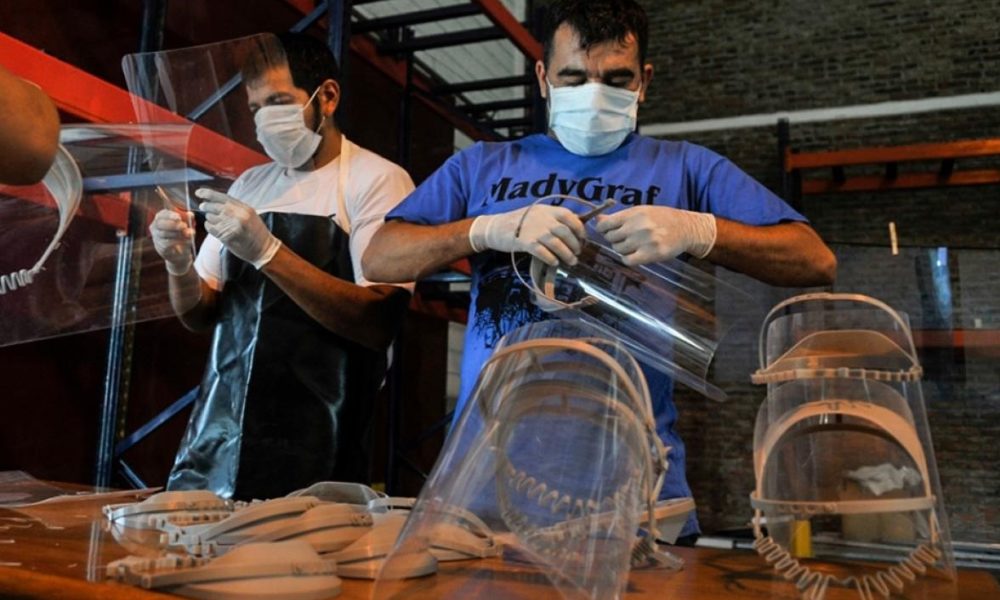 On Thursday, March 26th, the workers of Madygraf, a workers’ controlled printing plant in the northern region of Buenos Aires, held a press conference to announce that they would start the production of face masks and disinfectants to combat Covid-19.

Today, they are hard at work producing thousands of liters of sanitizer and hundreds of masks a day. The workers are not alone in this endeavor. They are joined by the students of the National University of San Martin, scientists of the National Commission of Atomic Energy, and various technical teachers in the area.

Workers, students, and scientists have come together to make badly needed supplies for local hospitals and the poorest communities. Worker Laura Arevalo explains that “it is a great example of us putting our factory at the service of health needs. An example that we workers can begin to organize and ask that every productive workplace be put under workers’ control and produce according to the needs of those at the bottom and not the bosses.” A sentiment shared by coworker Jorge Medina who puts it simply that “all the factories in operation should produce the basic necessities for the great majority and for health workers.”

This is not the first time that the workers of Madygraf have played such a role. Throughout its nearly six years under workers’ control, the workers of Madygraf have found creative solutions to problems and the plant has become a lodestar to the community and class conscious workers everywhere. In August of 2014 when RR Donnelley, the Chicago-based multinational, closed the plant 400 workers were out of a job overnight. Locked gates and a small sign that read “We are closed.  If you have any questions, please call this number…” alerted them to what happened. Within a few hours they had the machines up on running and finishing contracted work. The computers, however, were locked by Chicago which would have made new prints impossible. Computer science students of the University of Buenos Aires volunteered and unblocked the computers. From the beginning, workers and students came together to overcome obstacles.

The next obstacle was getting paid. All funds were locked up in bankruptcy courts, so as the workers fought the legal battle for monies owed to them and for the factory to be owned by them, they needed money. That would require the aid of the community. And so, they went to factories, universities, and public spaces to ask for donations. The workers also produced 20,000 children’s notebooks to donate to the poorest neighborhoods where many are in need of school supplies. The notebooks themselves include the story of how RR Donnelley became Madygraf and this brought in donations as well as raised awareness for the struggle. Where there was a need for school supplies, the workers of Madygraf stepped in for the community.

The workers won the legal fight, gained access to their funds, and began production in earnest. They continue to face friction from utility companies, paper suppliers, and the other problems associated with being a workers’ cooperative inside of capitalism, but have kept hundreds of workers employed while turning the factory into something more. There is a nursery providing childcare for the workers, and a study to help workers prepare for exams of high school diplomas. Projects like these were proposed by the Women’s Commission, a body in existence years before the takeover and plays a vital role in the assemblies that manage the factory. Last December, the plant’s parking lot was even turned into the “Factory of Rhyme” festival to support workers’ controlled factories and the struggles in Bolivia and Chile. The workers are class conscious and oppose all forms of oppression, such as when they went on strike to defend the right to a bathroom of a trans coworker.

From striking for trans rights, to building a Women’s Commission, to childcare within the plant, the workers have changed the workplace into a community at the service of human need. They have shown a small hint of what working life might look like after capitalism. Is it any wonder then that the workers would take the initiative in fighting coronavirus?

Now, they are producing face masks, sanitizer and demanding funds from the government for the production of public health posters and literature for the neighborhoods. Information is, after all, a key weapon in fights against infectious diseases. The workers of Madygraf, like the workers of the textile cooperative, Traful Newen, are demonstrating the importance of workers’ control in producing for needs, not for profit. But, these are just examples in small factories, what is truly needed are the largest factories of Argentina, the U.S., and throughout the world, to be controlled by the working class producing in a common plan. To combat coronavirus, they could begin with ventilators, but the industrial force of the world could be used for so much more.