Anti-trans laws affecting healthcare have been introduced in state legislatures across the country. What does this mean for trans folks, for the fight for Medicare for All and healthcare in the U.S.? 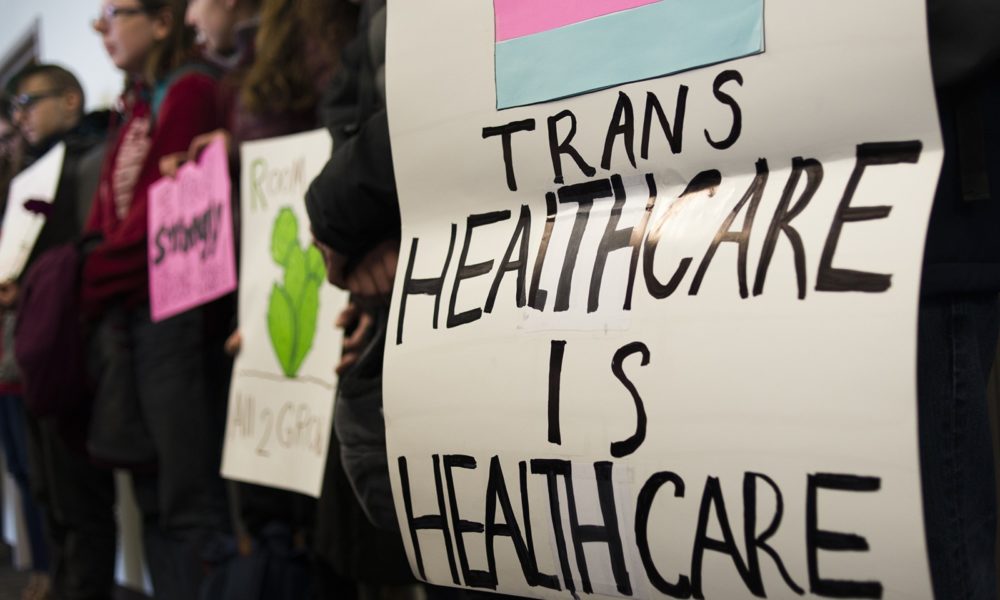 The rash of new anti-trans laws that have recently been introduced in several state legislatures are not only an existential threat to trans people, but a big step toward a healthcare system where the government and business owners dictate the medical care of workers. At the same time, these forces are also pushing for the repeal of marriage equality and the recriminalization of abortion. To some extent, the high cost of healthcare in the US already does this, but with insurance plans covering more procedures, the right is turning to the law to assert their ideology upon the public.

In South Dakota, Republicans introduced House Bill 1057 in an attempt to make it a felony for healthcare professionals to provide transition healthcare to trans people under 18 years old. The bill was defeated in committee after a strong public outcry against it. Colorado Republicans also introduced their own such bill. Similar bills in other states would demand the revocation of a doctor’s medical license for providing transition care to trans teens.

By 18, puberty has already caused permanent alterations to a person’s body and, for trans people, experiencing a puberty incompatible with who they are these changes can be devastating. Puberty blockers can temporarily prevent these changes, giving teens who question how they were labeled at birth the time to determine who they really are and what kind of physical changes from puberty they can live with. Healthcare organizations including the American Medical Association have confirmed that transition healthcare for those who need it is medically necessary and life-saving. Rates of suicide attempts, of mental illness, and the need for reconstructive surgeries later in life are all significantly reduced when trans teens and young adults are able to access transition care. The Endocrine Society has called on policy makers to follow the science on trans healthcare and not bow to unfounded, reactionary claims.

The timing of these bills is not random. In addition to the increased hostility against abortion access in recent years, a Dallas court case where a wealthy cis man sued his ex-wife, a pediatrician, to prevent their daughter from socially transitioning has attracted the attention of many on the right. The mother is fully supportive of her trans daughter, who, at seven years old, is still too young for any medical transition care. The jury awarded full custody to the mother, but those who do not understand trans healthcare have responded with strong reactionary fervor. Texas Governor Greg Abbott and Texas Senator Ted Cruz immediately demanded that the State not allow the trans girl to live as herself, use her own name, or access transition healthcare if she needs it when she reaches her early teen years. Both the Texas Attorney General’s office and the Texas Department of Family and Protective Services were also brought into the debate. Eventually, the judge overruled the jury to give joint custody of the girl to both parents, putting her ability to live as herself in constant jeopardy.

Some of these bills don’t just target trans people. By leaning on “religious freedoms”,  they would allow adoption agencies to refuse adoption to any LGBT+ people, and allow healthcare providers to deny service to anyone they choose by claiming that doing their job would violate their religious beliefs. Some of the new bills also ban local governments from passing non-discrimination laws. Other bills would require female athletes whose bodies don’t fit physical appearance stereotypes to undergo a variety of intrusive and medically unnecessary tests that would purportedly prove their sex before being allowed to participate in sports.

A different bill in South Dakota, HB 1215, would ban “any form of marriage that does not involve a [cis] man and a [cis] woman”. It would also legalize conversion therapy, ban legal discrimination protections for LGBT+ people, and specifically ban drag queens from reading to children in libraries (like “Drag Queen Story Hour“, a popular literacy campaign for children). HB 1215 would ban trans people from correcting the sex marker on government issued IDs and birth certificates, and ban public funding for transition healthcare. Other bills in South Dakota would require healthcare providers and teachers to out LGBT+ children and teens to their parents, which could put children at great risk. These bills collectively represent an attempt to erase LGBT+ people from public life and to further push a regressive and colonial gender and sex binary that fits neither scientific evidence nor many non-Christian concepts of gender.

If the far-right succeeds in criminalizing trans healthcare, abortion and birth control will almost certainly be next. By targeting a vulnerable minority population that they don’t expect most people to care about, Republicans are quietly trying to normalize authoritarian laws that dictate what healthcare people can have based on theocratic ideology instead of on science and medical best practices.

Across the aisle, most Democrats seek to preserve a healthcare market that makes healthcare decisions for you based on how rich you are. Most of the Democratic presidential candidates vocally support insurance-based healthcare, with their own minor reforms to it. But between sky-high deductibles, plans that ban some kinds of healthcare for discriminatory reasons, and the frequent lack of access to doctors on underfunded public plans, it is clear that insurance-based healthcare only works for those with means.

Beyond Medicare For All

The solution to ensuring healthcare access for a diverse population is neither a hodgepodge of corporate plans nor simply an expanded Medicare program. The entire American healthcare system must be rebuilt to guarantee access to healthcare for all, including transition care, reproductive care, and bringing underfunded public hospitals and other healthcare facilities up to the medical state of the art. Surprising no one, these underfunded hospitals are usually in predominantly Black and Latin urban neighborhoods and in poor rural areas. Putting medical facilities under the democratic control of their workers and local communities along with explicit protections for minority populations is critical to prevent wasteful profiteering and discrimination.

But the solution must go beyond the point of healthcare delivery. While countless billions get spent on war and corporate welfare, little makes its way to healthcare. Trans healthcare is about 90 years behind in development after the destruction of the first place built specifically to pursue it in 1933. Through various tactics, the right uses trans people’s existence as a wedge issue to divide and conquer the emerging socialist and anti-oppression movement. Since socialism depends upon solidarity, if the right can successfully keep trans people and other marginalized groups (gay people, POC, disabled people, etc) sectioned off from mainstream society, they will prevent the working class majority from exercising our greatest advantage — sheer numbers.

Further, dangerous new diseases such as the new coronavirus and strains of bacteria resistant to antibiotics continue to emerge. Falling vaccination rates and the reappearance of medieval diseases pose additional threats. Humanity cannot afford to have greed and the far-right hold back medical research and the provision of care anymore. High-quality and accessible healthcare — including transition and reproductive care — is not only a human right, it is human survival.