The arrest and sentencing of Dan Baker reveal the priorities of law enforcement and the justice system. 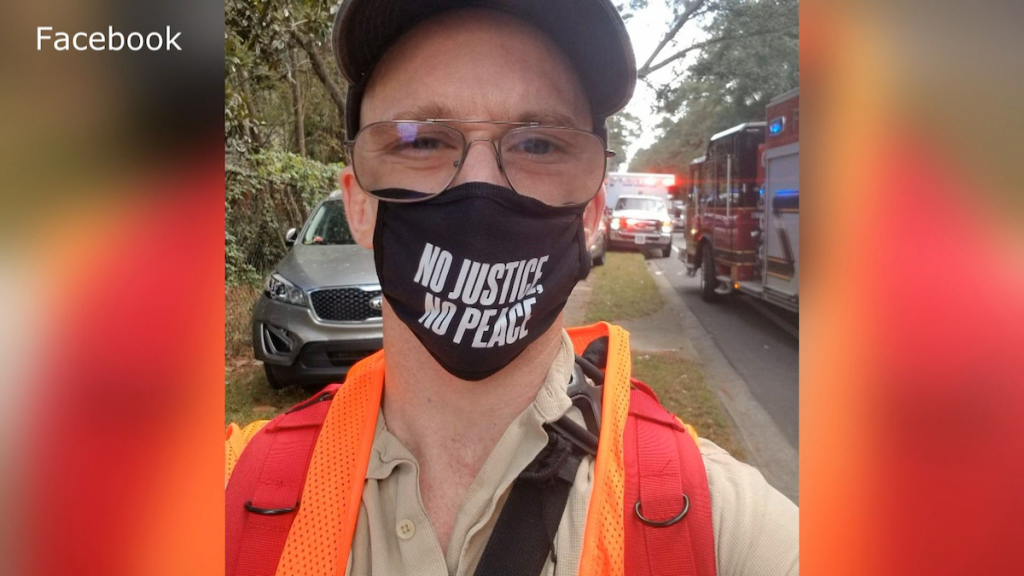 On Tuesday last week, Tallahassee antifascist activist Dan Baker was sentenced to three years in federal prison. According to the FBI, Baker had posted threats of violence and kidnapping online in the run-up to January 20, the date of Joe Biden’s inauguration. In light of the January 6 storming of the Capitol by fervent “stop the steal” Trump supporters, many of whom are facing criminal charges, it seems tempting to dismiss Baker’s arrest as a mirror image of that violence, and indeed, much analysis has fallen into this lazy parallelism. A quick glance at the details of his case, though, shows that his “crimes” are wildly dissimilar to those of the January 6 rioters; further, the vastly disparate responses to these respective cases, on the part of police, intelligence services, and the justice system, betray a systemic bias against those whose ideas run contrary to the power of the state.

Baker, 34, is a yoga instructor, EMT in training, and an active antifascist organizer in the Tallahassee area. He was involved in last year’s Black Lives Matter protests in Tallahassee and has previously focused on bringing attention to homelessness among veterans. A vet himself, Baker went AWOL from the army before his first deployment and later traveled to Syria on his own to join the People’s Defense Units, a Kurdish militia resisting ISIS in Syria. This last fact was brought up repeatedly by the prosecution to paint Baker as a dangerous, trigger-happy extremist rather than the person his friends know: a man who is trying to “protect his neighbors,” and who is “a joy to be around” and “the kind of person we need more of.”

So what are the crimes that earned Baker three years in the clink? A series of Facebook posts and a flyer headed “Call to Arms.” Baker was calling on people to show up at the Florida statehouse on January 20 (the day of Biden’s inauguration) to preclude events similar to the ones witnessed jus a week earlier on January 6. The flyer implores Tallahassee residents to “help protect your community from terrorists!” and to “protect capitol RESIDENTS and CIVILIANS from armed racists mobs.” It ends with the line “This is an armed COUP, and can only be stopped by an armed community!” Plainly, these are incitements to self-defense, not proactive violence, and these concerns were top of mind for many after the widely televised events of January 6. Baker suspected that Florida, which has a particular history of overlap between law enforcement and organized white supremacist organizations, might be in for similar events on January 20. The closest Baker comes to inciting violence is his recommendation to “encircle terrorists who attack the capitol. … SURROUND THEM AND TRAP THEM INSIDE!”

Even though Baker was clearly calling for a preventive show of force, rather than proactive violence, the release of his declaration led the FBI to raid his apartment on January 15, with support from the Tallahassee PD and the Florida Department of Law Enforcement. It seems odd that this huge task force was needed to bring in Baker, a man described by his landlord as “very well-read,” “well-spoken,” “quiet,” and “well-behaved,” and who owned a single handgun and rifle. Meanwhile, in the case of January 6, the impressive joint powers of America’s intelligence agencies and the martial might of DC’s various police forces were not summoned until rioters were already stealing paperweights from the congressional chambers.

In the wake January 6, much ink has been spilled about how such a “failure of intelligence” could have occurred and how the militarized police forces that blanket DC could have been “caught off guard.” This kind of hand-wringing was incredibly naive at the time, but now, with the case of Dan Baker for contrast, it can only be willful ignorance that allows people to wonder such things out loud. And while it is important to criticize the willful ignorance of cable TV talking heads, it is even more imperative to challenge the narratives provided by the state to justify and normalize this dissonance. As has been well-reported, the chatter that allowed right-wing protesters to mobilize through online message boards in preparation for January 6 was well known and monitored by the FBI and other law enforcement, just as Dan Baker’s activity was. What are commonly described as “mistakes,” “oversights,” or “failures” are in fact simple choices: choices as to where to place focus, personnel, and resources; choices that stem from judgments about who poses a threat and who does not; choices that reflect which threats matter and which do not. While members of the Proud Boys and other organizations of the far-right online fever swamps were allowed to plan for January 6 in relatively plain sight online, it is actually leftists like Baker who “clearly pose[d] a threat to public order,” in the words of U.S. Attorney Lawrence Keefe, and who want “to wreak havoc in our communities,” according to Jacksonville FBI agent Rachel Rojas.

As further evidence of how the state weighs the danger posed by different flavors of “extremists,” we can look at their disparate treatment by the justice system. Since January 6, courts have been contorting themselves in their treatment of the rioters, trapped between the need to repudiate the radical nature of the attack and the institutional pressure to let the protesters off with relatively light sentences, while their apologies, confessions, and tears to permeate media narratives about their prosecution. A convoluted flowchart, based on how many minutes each protester spent in the Capitol building, has largely resultedin sentences on the order of a $500 fine and 45 days in jail, or less.

Baker, on the other hand, will spend 34 months in prison and a further three years under probationary supervision. All this for alleged “incitements” to violence that never materialized, either by him or others at his behest. Besides representing a chilling and flagrant violation of his right to free expression, this clearly demonstrates the fundamental priorities of the institutions of “justice”; they believe the state has more to fear from one man advocating for working-class self-defense than from a far-right MAGA militia that stormed the U.S. Capitol in an attempt to disrupt the certification of a presidential election. In addition to demanding his freedom on the grounds of the constitutional impropriety of his sentence, a revolutionary consciousness demands that we challenge the state’s narrative that people like Baker represent an inverted “extremist” threat to the resurgent American right wing. We know, and have seen, that the state and its armed agents will not resist the right wing (when, indeed, this is even a meaningful distinction to make). Instead, it is incumbent on working people to take up their own self-defense, as Baker called for, and it is incumbent on all of us to speak out against the injustice of his sentence.