AR-15s in the State Capitol: What the Anti-Quarantine Protests Tell Us About the Police

Armed white protesters were allowed to enter the Michigan State Capitol building. This highlights the cops’ role in upholding white supremacy, private property, and the interests of capital. 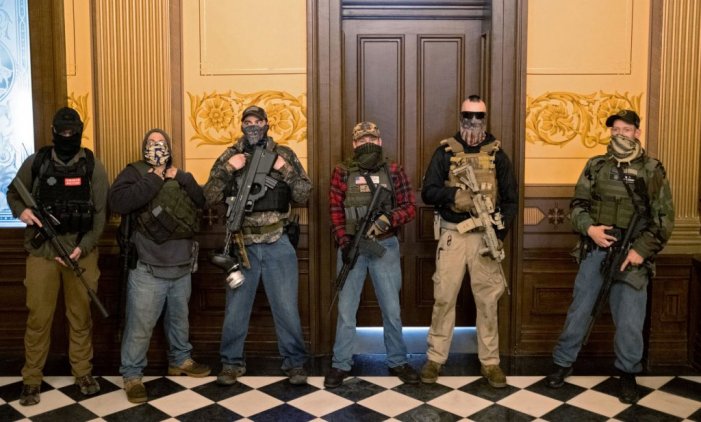 “Tyrants get the rope.”

“Even the Pharaoh freed the slaves during the plague.”

These were some of the slogans written on the signs of the thousands of people who descended on the Michigan State Capitol building on April 30 for the “American Patriot Rally.” They brandished weapons, wore bullet-proof vests, and yelled at the police guarding the State House as well as the legislators inside.

These are Trump’s minions, who erupt into chants of “four more years” and are encouraged by Trump’s tweets to “Liberate” states under lockdown. Trump even tweeted his support, writing that these are “very good people, but they are angry.”

They certainly don’t look like very good people, and that was made explicitly clear through their deplorable treatment of healthcare workers, screeching at them to “Go to China.” These nurses and doctors are putting their lives on the line to treat patients but were met with beratement by the protesters.”

This is no different than when Donald Trump called Charlotteville neo-Nazis “very fine people” — while also saying that Black Lives Matter protesters were “looking for trouble.”

Among the most jarring aspects of these protests are the reactions by the police and the State. Armed protesters were allowed to enter the state capital and yell in the faces of cops — again while armed! And yet, there was only one arrest. No tear gas and no deaths. This is similar to Charlottesville where neo-Nazis protested without police interference, and eventually killed someone. It is another clear example of the fact that the cops won’t be used to put down neo-Nazis; this just highlights the cops’ true nature as racist defenders of capitalist interests.

Somehow these protesters are less threatening than unarmed Black people. 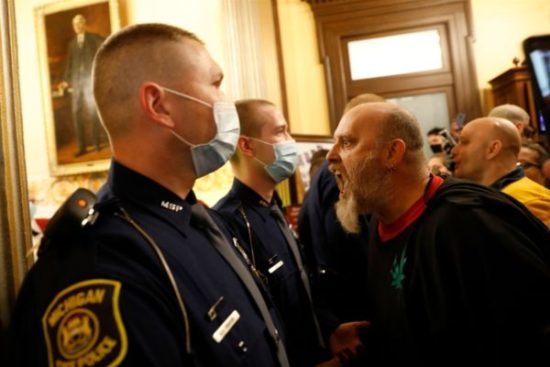 Racist class interests are incredibly clear when recalling the reaction of the police to the Black Panther Party, an anti-capitalist, anti-imperialist group of Black militants who posed a threat to the State. They were infiltrated by the FBI and demolished. Their leaders were imprisoned and killed, most notably Fred Hampton, who was assassinated in his own home. And notably, when the Panthers showed up to the California State Capitol to protest holding weapons, they were arrested on felony charges of “conspiracy to disrupt a legislative session.” The Mulford Act, also known as “the Panthers Bill” passed in California in 1967, repealing a law allowing public, open carry of loaded guns with the support of the NRA, which is only in favor of white people carrying loaded guns in public. This criminalization of the Panthers has a great deal to do with their political ideology which posed a threat to the racist capitalist system.

The fact that protesters were allowed into the Michigan Capitol has everything to do with the class content of what they are putting forward as well. This week is the anniversary of the Kent State and Jackson State massacres, where black and white college students were shot by the cops for protesting the Vietnam War. The cops were defending the class interests of capital: the  U.S. imperialist war and fighting against a newly radicalized youth movement at Kent and Jackson State. Likewise, they are defending the class interests of capital in Michigan.

These protesters aren’t only being incited by Trump. They are also being encouraged by the Wall Street Journal, which for weeks has been toting Trump’s line about reopening businesses and have been calling “the cure worse than the disease.” They have been supporting the lockdown protests, calling their actions “understandable.” And about a week ago, they said, “The protests remain relatively small. But they do expose the elite disconnect with ordinary America.”

The Wall Street Journal is trying to act like they are the voice of “the people.”

While it is true that working class people desperately need relief during the lockdown, this “relief” shouldn’t be going back to work in order to be hyper-exploited amidst a pandemic. It should come in a quarantine wage for all people paid for by taxes on the capitalists making billions during the pandemic. And it is true that small businesses need relief as well, but that should also come in the form of no interest loans to actual small businesses (not Shake Shack). In fact, 95% of Black owned businesses and 91% of Latino owned businesses were denied the small business stimulus package .

But these protesters aren’t regular working class people asking the government for some relief. They are Trump’s ultra-reactionary base with AR-15s acting on behalf of Trump and sectors of capital. In fact, they are funded by capital, including the Michigan Freedom Fund, a group linked to Secretary of Education Betsy DeVos. So, it is important to understand the reaction of the state and the cops in their class interests. The capitalists want to re-open the economy — they’re desperate to do so. The stock market is struggling, oil prices are in the dumps, over 30 million people are unemployed. They need people back to work in order to continue making huge profits for themselves. And they’ve said it over and over. They don’t care who dies or who gets sick. In fact, some politicians have gone so far as saying that elderly people should be sacrificed for the good of the economy.

But it’s not just elderly people who are being sacrificed for the economy. The effects of systemic racism are rearing its ugly head with clear racialized numbers of who is dying of COVID-19. Nowhere is that clearer than in Michigan, where the death rate for Black people is five times greater than that of white people.

People of color make up a huge proportion of essential workers: construction workers, grocery store workers, workers in the meatpacking industry, Amazon workers. Many receive little to no PPE.

We should resist the urge to see these protesters as science-denying outliers. This is Trump’s racist, right-wing base, the same who took action at Charlottesville and who chanted to “send her [Ilhan Omar] back.” The cops are part of the same social base, avid Trump supporters. But they go further. They are a central force in maintaining a racialized capitalist social order, with Black poor and working class people terrorized by the cops and a judicial system that believes their cynical “we were afraid for our safety” bullshit.