Thousands gather in Dearborn, Michigan to protest Joe Biden’s support for Israel and the ongoing attacks on the Palestinian people. 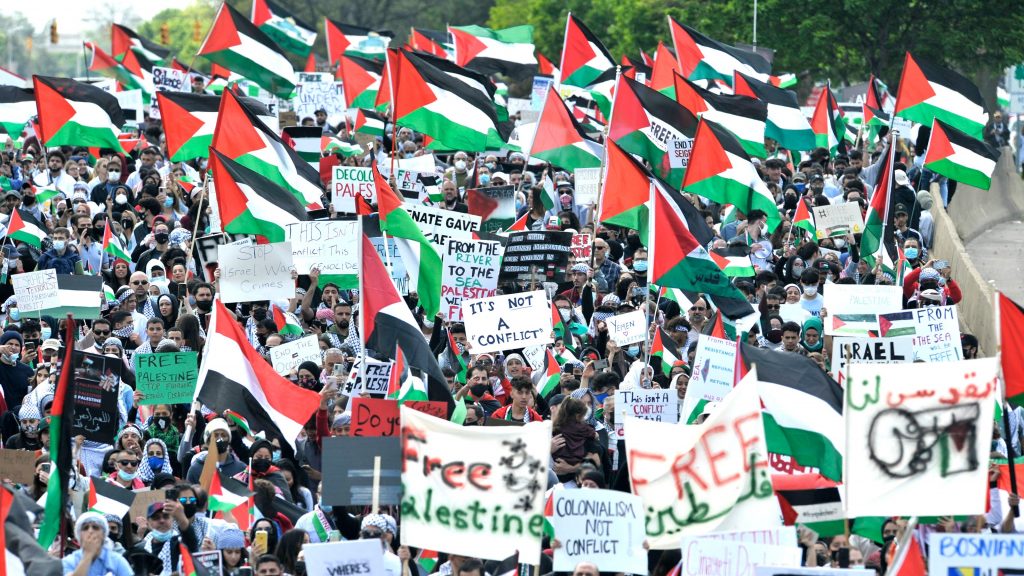 On Tuesday, Joe Biden visited Dearborn, Michigan to see Ford’s newest electric vehicle and speak at the plant. Over 3,000 protesters gathered across three locations in the city to hold him accountable for his support of Israel even as it continues to bomb Palestinians, murdering hundreds, injuring thousands, and displacing tens of thousands of people.

Dearborn’s population is 47 percent Arab-American, the majority of whom voted for Biden in 2020, and Michigan is home to the largest Arab population outside of the Middle East. The Detroit Free Press spoke with Osama Siblani, publisher of the Arab American News and organizer of one of the protests. “When they say Israel has a right to defend itself and then don’t give the right of people being occupied to defend itself,” Siblani told them, “that doesn’t make sense.”

Some members of the Arab-American community in Dearborn are reckoning with their support for Biden and potentially reevaluating their positions. Siblani posted to Facebook, “Hey, Democrats, our votes aren’t cheap. Watch what we can do in 2022. We won’t forget.” Another protester, Sherma Aman, said, “We are marching because we put Joe Biden in office. If it wasn’t for our turnout in the state, he wouldn’t be in office.”

According to Fox, Siblani was invited to a virtual meeting with the White House, but he said it was entirely unproductive and that he refused to apologize for those fighting against the occupation of their homes, even with rockets. Biden’s calls for a ceasefire are not enough because, as Siblani pointed out, this conflict has been happening for 73 years. This week’s attacks are only the most recent escalation, and Biden is only the most recent U.S. president to support Israel’s apartheid state.

“They asked us to save Democracy from Donald Trump and now we are asking everyone to please save Palestine from Joe Biden,” said Amer Zahr, another one of the protest organizers. “He is participating in and funding the murder of our families.”

To continue supporting Biden despite his total disregard for Palestinians is to say that their suffering — their deaths, terror, and displacement from their homes — is a price worth paying for whatever modest reforms he may pass for U.S. citizens. Although there are many political tendencies among Dearborn’s Arab-American community, some more conservative than others, some of the protesters in Dearborn have recognized, and others should remember, that a key component of “lesser evil” is still “evil.” Both the Republican and Democratic parties are deeply complicit in the oppression of the Palestinian people via the more than $146 billion in aid the United States has given to Israel since World War 2.