Are You a Public School Teacher in a State That Bans Collective Bargaining? This Article Is for You.

In states where public sector collective bargaining is banned, the path to a union and a contract is harder, but not impossible. A worker from one of these states explains why. 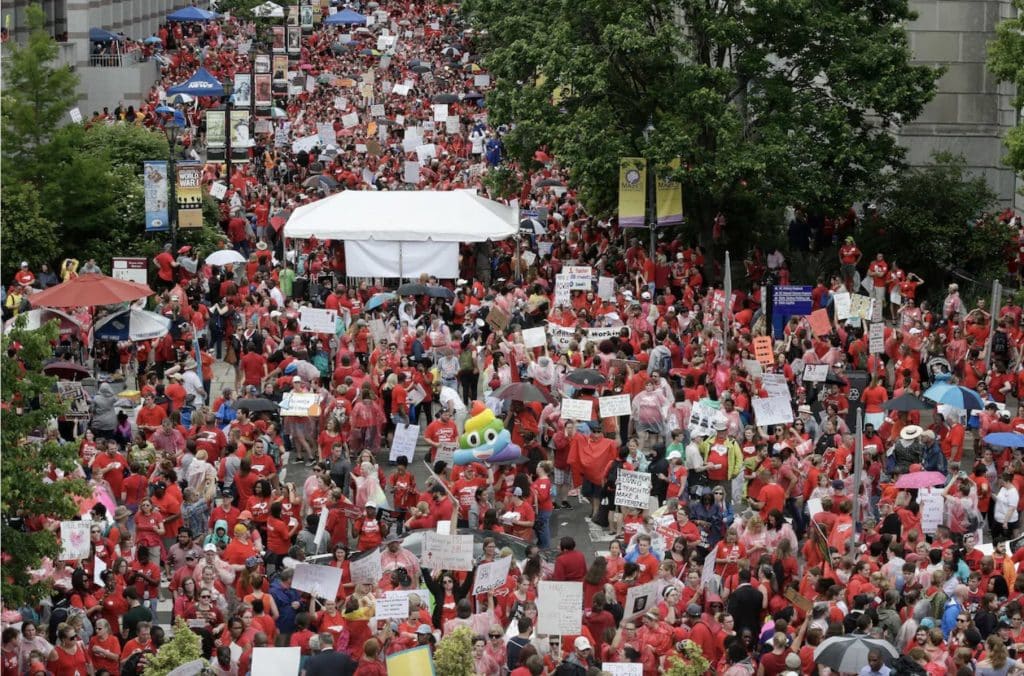 Thousands of teachers ralliy in Raleigh, N.C. in 2018. (Gerry Broome/AP)

Recently, a friend of mine tweeted, “watching all these workers rise up in solidarity makes me so damn proud and excited… and sad i live in a state which forbids collective bargaining for public sector workers.* the FOMO is real. if you *can* unionize, do it!!!” She then clarified that her state (Virginia) did amend the law so that municipal employees could unionize if given permission by the municipality, but that other state employees (including those like her, who work for public colleges and universities) still do not have a pathway forward. This made me think.

I grew up in North Carolina, one of five states where public sector collective bargaining is still completely banned. Ballotpedia lists 17 other states, including Virginia, where public sector collective bargaining is “permitted” but not required (read: restricted in various ways, such as Virginia’s requirement for municipal permission), but even a map like this one obscures other union-busting legal measures. For example, in Iowa (which Ballotpedia’s map lists as having a “duty to bargain,” the most-protected category on the map), public sector unions are still required to completely recertify the existence of their union every two years, consuming significant amounts of organizing energy, which leaves less energy for organizing for anything else, including negotiating strong contracts, going on strike, or taking up social causes.

Growing up, I thought every kind of collective bargaining was illegal in my state. I didn’t know anyone who was in a union or who knew anyone who was in a union, except for my relatives in New York. I thought “right to work” meant no unions, period. This was not simply because of youthful naivete or the widespread lack of education about unions in public schools, but because North Carolina has a unionization rate of only 2.6 percent, the second-lowest in the country (South Carolina comes last, at 1.7 percent). To date, the only homegrown unions with collective bargaining rights I know about (as opposed to folks like UPS Teamsters who happen to work in North Carolina, for example) are the Duke Grad Union (SEIU Southern Region Local 27), Duke University Press (DUP) Workers Union (NewsGuild Local 32035), and the North Carolina locations of Starbucks Workers United, all of which were formed within the last two years. That’s not to say there aren’t others — just in looking up the local numbers above for this article, I learned that non-tenure-track faculty and biweekly service staff at Duke are also unionized — but this extremely limited list speaks to the ongoing lack of workers’ organization among my home state’s labor force.

The low level of unionization in North Carolina is not a coincidence, nor is it simply owing to workers’ lack of interest or opposition to organized labor. As Philip J. Wood (no relation to me) details in Southern Capitalism (printed by unionized labor at Duke University Press), since the very beginning of Reconstruction, North Carolina’s bourgeoisie has consistently suppressed organized labor through using white supremacy to divide workers, isolating and surveilling workers through the use of company towns, crushing strikes using the police and the National Guard, and other techniques specific to the political economy of a state with large agriculture and textile sectors. In fact, the NAACP has characterized North Carolina’s ban on public sector collective bargaining as the state’s last remaining Jim Crow law. One of the main selling points for persuading businesses to open new locations in North Carolina has always been the low wages compared to other regions and the low level of organized labor, accompanied by a promise to protect businesses from organized labor at the political level. In more recent decades, as the central Triangle region has grown to become the Silicon Valley of the East Coast, boasting the highest number of PhDs per capita, many businesses also enjoy a workforce less predisposed to view itself as part of the working class, without a strong labor culture to interfere.

Even without collective bargaining rights, however, North Carolina’s public sector unions have been willing to act in recent years. In 2018, the North Carolina Association of Educators (NCAE) organized a statewide sick-out, during which teachers traveled to the NC General Assembly to lobby for increased funding and higher pay. More recently, in line with nationwide trends, graduate student workers at NC State University and the University of North Carolina at Chapel Hill have begun to organize — in UNC’s case, by reviving a mostly defunct chapter of a UE local originally founded by campus housekeeping staff. But there is no legal process for unions to make collective bargaining agreements with their employers, and employers have an unequivocal legal right to refuse. The unions can win concessions — and they have — but their wins have no lasting protections, no guarantees.

So, I’m left thinking about the problem my friend raised, and her FOMO for unions in states where collective bargaining agreements aren’t outlawed. In Virginia, the law prohibiting public sector collective bargaining was amended to its current form in 2020, and the Richmond Education Association became the first group of public sector employees to have their right to bargain recognized under the amended law earlier this year. The amendment that made this possible was passed soon after Virginia’s 2018–19 wildcat teachers strike and after VCORE, the class struggle–oriented rank-and-file caucus of the Virginia Educators Association, was founded in opposition to the union leadership’s focus on lobbying. That these events took place one after another is no coincidence. Despite decades of lobbying, the law was amended only after Virginia teachers demonstrated their power during the strike, and it was the experience of that strike and the conclusions taken from that experience that led to the formation of VCORE.

Public sector unions in Virginia, North Carolina, and all other states where it is banned can win collective bargaining agreements — it will just be harder and take longer, since the first task is to force state legislatures to overturn these laws. Education workers are especially well positioned to make this happen, for a number of reasons:

Just last month, 55,000 striking education workers in Ontario overturned a law that would have levied significant financial penalties on their union for going on strike. Striking to overturn laws can be done — and it’s being done by education workers. A coalition uniting K-12 and postsecondary education workers, committed to striking until these laws are overturned and they win the right to bargain, could easily be the way to get it done. That’s not to say it would be easy to do — it would take not just a lot of organizing work, but widespread commitment to militant, class struggle unionism.

Labor law, including laws like the National Labor Relations Act that offer some protections to unionized workers, exists to maintain a labor peace — to grant workers just enough protections that we don’t rebel against the system as a whole, protecting profits and bourgeois power in the long run. We don’t have to respect it, and we don’t have to obey it, as long as we operate collectively. All workers deserve a union and a union contract. Organizing against these laws is the way to win them, not just for public sector workers without collective bargaining rights, but for all workers, because it can show by example the path to making great change beyond our system’s legal limits.