In downtown Buenos Aires, the march grew so massive that it was almost impossible to move, and participants had to wait their turn to take even one step forward. Estimates range between 300,000 and 500,000, making it one of the biggest protests in recent history. 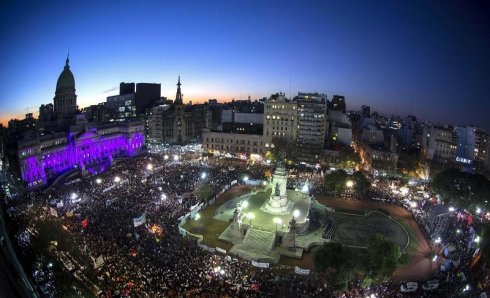 Shocked by a spate of high-profile crimes against women, including the murder of a kindergarten teacher in front of her students by an estranged husband on April 15 in Córdoba, a growing movement in Argentina is demanding an end to violence against women.

According to official statistics widely criticized for systemic underreporting of such incidents, domestic violence takes the life of at least one woman a day in Argentina, and rates are even higher in neighboring states. In response, the hashtag #NiUnaMenos (Not one less woman) has gone viral on Twitter, with Lionel Messi, one of the best soccer player on the planet, lending his voice on Twitter: “We join all Argentineans today in shouting out loud #NiUnaMenos.”

In an article published in La Izquierda Diario (The Daily Left) from Argentina, Andrea D’Atri and Eduardo Castilla report from the June 4 mass demonstrations in Buenos Aires and the solidarity actions around the country and the region.

THE MAIN mobilization in front of the National Congress in Buenos Aires, Argentina, was gigantic, but it also surpassed all expectations in more than 70 cities all across Argentina. And that’s not all–coordinated protests took place from Chile to Uruguay to Mexico on Thursday, June 4.

In downtown Buenos Aires, the march grew so massive that it was almost impossible to move, and participants had to wait their turn to take even one step forward. Estimates range between 300,000 and 500,000, making it one of the biggest protests in recent history. At 6:30 p.m., even as thousands began to leave the Plaza de los Dos Congresos, there were still just as many people trying to get into the square. Just going one block could take up to half an hour. People covered almost the entire plaza, but also poured out along Avenida de Mayo, down Avenida 9 de Julio, and filled up several blocks of side streets in all directions.

The mobilization had a broad character. It was very different than the march that took place on February 18 in support of the prosecutors in the Alberto Nisman case. That march saw the upper-middle class in the streets in opposition to left-of-center President Cristina Fernandez de Kirchner’s national government, but the upper strata were absent on June 4. This time, the majority was a multi-gender crowd of young students and workers (as well as some professionals), many wearing school or work uniforms and coming straight from their factories, offices, hospitals and schools.

Feminist, labor, student, social and community organizations turned out in force alongside many people who came to march as individuals. Dozens of busses and vans were parked, which showed that many people had organized themselves from the surrounding towns and suburbs to get the march. And it was obvious that for many of them, marching in Buenos Aires was a new experience because so many had to ask for directions to this or that street.

All of this added up to an enormous multitude rejecting the epidemic of murder and violence against women. In a special area in front of the main stage, families hung photos around their necks of slain female relatives. Their faces showed a powerful mix of sadness and pain, mingled with the joy of being surrounded by the solidarity of hundreds of thousands of people across the country.

“Let’s try to march over there,” said one girl to another around 6 p.m. But just then, a column from the Public Employees Association (Asociación Trabajadores del Estado–ATE) began to enter the plaza. So the two young friends were stuck in the middle of the street, hemmed in by the crowd.

A few minutes later, on the other side of the plaza, the railroad workers marched in. Meanwhile, the contingent from the pro-Kirchner youth group La Cámpora appeared, headed by Florencio Randazzo (Minister of Interior and Transportation) and Augustín Rossi (Minister of Defense), among other ranking government officials and bigwigs.

VARIOUS POLITICIANS from the bosses’ political parties were out, making a big display of their official staffs. For example, Dulce Granados, a deputy in the National Assembly and the wife of the Buenos Aires Province Minister of Security, showed off a little heart drawn on her right hand while surrounded by dozens of supporters waving placards emblazoned with her own name!

The government threw its support behind the demonstration in the last few days, hoping to avoid it being converted into a purely oppositional mobilization. President Kirchner tweeted her support on the very morning of the march, even though she made no mention of it–or the high rate of murder against women–during her noontime national broadcast from Mendoza. This failure provoked criticism from Noelia Barbeita, the Mendozan gubernatorial candidate for the Socialist Workers Party (Partido de los Trabajadores Socialistas–PTS) in the Left Workers Front (Frente de Izquierda y de los Trabajadores–FIT), who blasted the president for turning her back on the demands raised by thousands of women.

Many well-known celebrities turned out as well, including designer Roberto Piazza as well as actresses Andrea Bonelli and Alejandra Darín and actors Gonzalo Heredia and Arturo Bonín who belong to the Argentine Actors Guild.

Improvised street theater was on display on many corners with young people wrapped in plastic bags and people carrying placards that spelled out #NiUnaMenos. Creativity radiated through the crowd.

The diversity of sentiments in the assembly was expressed in the variety of posters. Just behind the main stage, one banner read, “Jesus said: I have come so that THEY may have LIFE and that they may have it in ABUNDANCE.” While a few hundred meters and thousands of people away, a young woman carried a sign reading, “If being a SLUT means being free and in control of my own body, I’m a SLUT. So what?”

The main message, read by actress Erica Rivas and actor Juan Minujín, argued that sexism is a cultural construction. Yet, when we talk about violence against women, we must also focus on barriers to women controlling their own bodies, sex trafficking networks, street harassment and other forms of social and institutional violence, including those in which the security and police forces themselves are involved.

The well-known artist and cartoonist Maitena read, one after the other, the points from a petition which organizers asked politicians to sign, committing themselves to the struggle against gender violence. First among these was a demand to oversee and authorize all necessary resources for a National Action Plan for the Prevention, Punishment and Eradication of Violence Against Women, as is set forth in Act 26.485, passed by the Argentine Congress in 2009. Other demands included victims having access to free legal support during all legal proceedings, the development of a unified official registry of victims of gender violence in order to maintain official and up-to-date statistics, and that comprehensive sex education is guaranteed at all educational levels.

All over the country, the left has joined in the demand for #NiUnaMenos, but it has also denounced the multiple forms of violence against women. The left puts the blame on the institutions responsible for legitimizing, reproducing and justifying this violence. For example, the socialist feminist group Pan y Rosas (Bread and Roses), made up of members of the PTS and independent activists, mobilized more than 3,000 women for the main June 4 march outside the National Congress and another 4,000 in other parts of the country, while Pan y Rosas groups in Chile, Mexico and Uruguay echoed these demands.