The growing violence against women sparked a national movement against femicides and gender violence. As a part of this movement, it is expected that thousands of people will take part in demonstrations today in Buenos Aires and in more than 70 cities across Argentina. 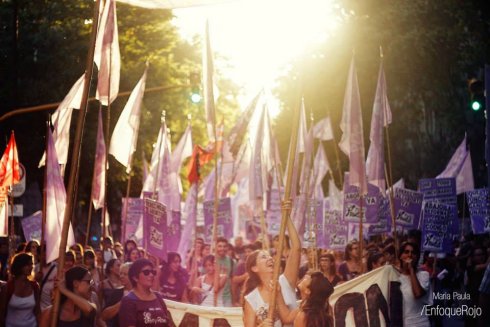 Last month, Chiara Paez (14), a pregnant teenager, was found dead and buried in her boyfriend’s backyard in the city of Rufino (Santa Fe). Her 16-year-old boyfriend, Manuel Mansilla, confessed to the crime before a judge, although speculation remains over whether he received help from his family.

According to a feminist NGO, it is possible to estimate that every 30 hours a woman is murdered in Argentina, by a family member, a partner, or a former partner.
Argentina has specific legislation regarding the issue of violence against women. Law 26,485 (2009) addresses gender violence. Nevertheless, violence against women has been growing and there are no official records.

The violence doesn’t stop. We have to make it stop!

The growing violence against women sparked a national movement against femicides and gender violence. As a part of this movement, it is expected that thousands of people will take part in demonstrations today in Buenos Aires and in more than 100 cities and locations across Argentina.

Under the hashtag #NiUnaMenos (Not one more murdered woman), activists, journalists, writers, left, students and workers’ organizations have organized a national day of action against femicides.

Today, a wide majority, moved by violence against women and outrageous femicides like Chiara Paez’ crime, will be rallying. Many feel they need to shout, organize, take to the streets and put an end to the violence.

We do not accept hypocrisy

But there is also another group, a cynical one, which wants to benefit from the demonstration. It’s made of traditional parties’ politicians (national and local level), judges, Police… and Pope Francis. There will even be TV hosts, who’ve made their career on misogyny. They want to convince us that they’re joining us to fight against femicides when they are the ones responsible for generating, legitimating and justifying the violence against women.

This is why we will rally with feminist organizations, women from the National Campaign for Abortions Rights, students and workers’ organizations, left parties, the Left and Workers’ Front, Pan y Rosas (Bread and Roses). We demand: #NiUnaMenos (not another killed women), not another death from illegal abortions, traffic and sexual exploitation, or poor labor conditions (which affect women’s health). We also condemn national and local governments, judges and the Church; they are all responsible for the misogyny and the violence. Chauvinism is the problem but also the capitalist State and its institutions.

More than 300 women die each year in Argentina as a result of illegal abortion. More than 600 women are missing, kidnapped for trafficking and sexual exploitation. Almost 50 % of women in the labor force are working in precarious conditions. This is also violence against women.

Demonstrations will also be held in Montevideo (Uruguay), Santiago de Chile, and Mexico City, as part of the #NiUnaMenos campaign.

The violence won’t stop on its own. We have to make it stop!