ARGENTINA: The Scope of a New Strike

In a strike that took place all over the country, the Left and fighting sectors raised their voices within the transportation strike and “piquetes” (roadblocks), aside from bureaucratic unions, demanding the rights of all the workers. 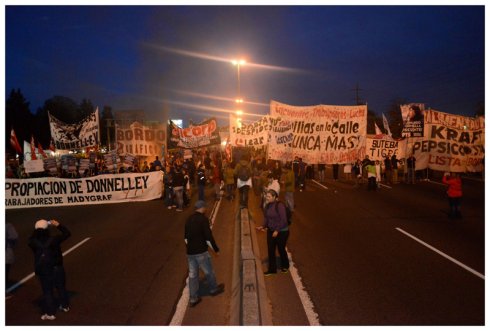 See more pictures of the strike

As it happened on March 31, last Tuesday, June 9, the Confederation of Transportation called on all the unions to strike. The confederation, which leads the unions and represents the opposition to the government for its ability to paralyze the entire country, had asked the five main unions to joined the strike. The addition of the CGT, CGT (Azul y Blanca) and the CTA turned the measure into a national strike.
In a compelling demonstration, the transportation strike and the roadblocks created by the Left and combative sectors were key to provoking similar stands everywhere in the country. The main interruption was caused by the stopping of public transportation; trains, busses, subways and airplanes. Gas stations and freeway tolls were closed. Truckers paralyzed all the loading transportation: garbage collection, transportation flow, banking operations, gas, beverage, dairy products, etc. The participation of the health and administrative sectors was more prominent within the provinces (outside of Buenos Aires), where ATE has a lot of weight. The teachers strike was felt in cities such as Rosario, La Plata, and Entre Rios. In many provinces the roadblock guaranteed that even workers that are not unionized could join in the strike.

Evaluating the aftermath of the strike, Hugo Moyano (CGT leader) declared, “there was a wide-reaching participation participation” that “showed disagreement” from part of the workers “directed to the policies implemented by the government.” But, even considering this achievement, the fifth strike against Cristina Kirchner was somehow smaller compared to the strike of March 31.

The bureaucracy of Union Leaders

Despite the lack of preparation from part of the organizers, the strike was powerful. These CGT leaders did not offer support to workers in conflict that suffer from layoffs, like workers of WorldColor, Cresta Roja or Coca-Cola Femsa. To these leaders it is important to get ready and to show strength positioning themselves alongside those seeking to replace Cristina Kirchner.

Since the strike of March 31, they roam the offices of political bosses. Thus, Moyano expressed appreciation for the neoliberal Mauricio Macri and said that there are sectors “already working” to achieve a “political and social life with an eventual national Macri-led government” and considered it necessary to “leave behind the clashes”.

The last straw was the declaration of Luis Barrionuevo, who shamefully criticized the lack of “dialogue” with the government comparing it to “the era of the military dictatorship, where we strike, fight … but we were able to talk and negotiate.”

Fighting unionism and the Left

Leftist organizations and militant unionism raised their voices on the roadblocks for the workers’ demands, giving the strike great significance. The roadblock at Panamericana was led by the workers of Worldcolor (formerly Donnelley), Lear, Kraft, Pepsico, Cadbury (Kraft Victoria), Printpack, Siderca, aeronautical workers, many other factories of the northern region of Buenos Aires and the the PTS (Socialist Workers’ Party).

Ruben Matu, leader of Lear’s workers and PTS candidate for the FIT, proposed an independent political expression completely detached from the capitalists, unlike the bureaucrats who want to channel workers’ anger into the austerity proposals of candidates such as Scioli, Macri or Massa. Ruben Matu said that at the roadblocks were the “workers that today are taking part in the major struggles under way”, adding the need “to raise an independent voice away from the bureaucracy calling to the strike, in order to fight against the income tax, but also against wage ceilings, job insecurity, and the rights of women.”

Nicholas Del Caño, national deputy and presidential candidate for the PTS (FIT), took part at the roadblock in Panamericana, responding to the cowardly remarks of Anibal Fernandez, the chief of presidential cabinet. Fernandez had appealed to a phrase often used to refer ironically to picketing workers who are accompanied by the Left: “The essential is invisible to the Trotskyists.” Del Caño replied: “It seems that Aníbal Fernández is not aware of the problems faced by the 280 workers at Worldcolor, fighting the closing and emptying of the factory being conducted by the employer; or the workers in the former Donnelley, demanding the expropriation of the factory to keep their jobs; or the Lear workers’ delegates facing the union gangs, allied to the Government (SMATA); or the Kraft and Pepsico’s workers struggling to stop the salary cap; or the workers of the tire industry (Fate) suffering suspensions. All of these workers are highly visible, even though the government wants to hide them. We are accompanying the workers at the roadblock of Panamericana like in any other fight, because many of them are invisible to the bureaucracy that has called this strike.”