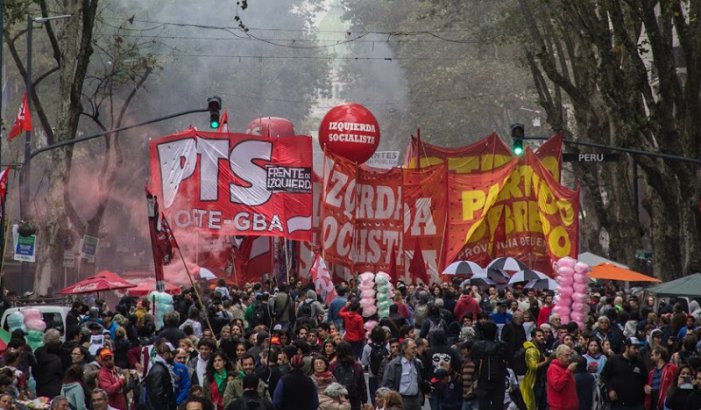 The Left Front repudiates the coup attempt in Venezuela, directly driven by U.S. imperialism and its lackeys in the Organization of American States (OAS). Juan Guaidó’s self-proclamation as president of the republic was blessed by Donald Trump and his “agents” in Latin America: Jair Bolsonaro, Mauricio Macri, and Enrique Piñera, in what constitutes a direct violation of the country’s sovereignty.

They seek to hide this interventionism by invoking the defense of “democracy” and “human rights.” But the U.S. government has always promoted military and political intervention against the peoples of the world. Coup conspiracies in Latin America have historically been orchestrated from Washington. The fascist Bolsonaro has not only praised the Brazilian dictatorship of 1964-1985, but also formed a government filled with military men, and announced a witch-hunt against social activists and the left. The Latin American governments that have joined this interventionist and pro-coup crusade systematically violate rights and democratic freedoms in their own countries in order to pass austerity measures and sell out national assets, as demanded by the IMF and multinational corporations.

In turn, the president of Argentina, Mauricio Macri, is deepening a repressive policy, encouraging the expulsion of immigrants, lowering the minimum age of criminal responsibility, and providing impunity to police officers who commit murder, as exemplified in the Chocobar case. The Macri family comes from a political current that has supported or participated in all the coups and military dictatorships that took place in Argentina since 1955.

We also denounce Sergio Massa, Miguel Ángel Pichetto and Juan Manuel Urtubey, leaders of the Alternativa Federal, who have joined the pro-coup crusade against Venezuela’s government. Former president Cristina Fernández de Kirchner, for her part, has not yet made any comment on the issue. Her silence is in line with Peronism’s “policy of unity”, which ostensibly means unity with those who defend the U.S. intervention in Venezuela. A statement released by the parliamentary bloc of the Frente Para la Victoria (FPV), on the other hand, favors the camp of “dialogue” promoted by the governments of Mexico and Uruguay, which amounts to a negotiated solution with U.S. imperialism.

This condemnation does not mean giving any endorsement and political support to the Bolivarian regime. The government and the civic-military regime of Nicolás Maduro is responsible for leading the Venezuelan people into a trap. From the beginning, Chavismo established a regime of personal power and nationalization of popular organizations, using the Bolivarian National Armed Forces as the main support for its rule. Under the impact of the world crisis and the fall in oil prices, it increasingly implemented austerity policies and attacks on people’s living conditions.

The Venezuelan government has brought the monthly minimum wage down to $6 and caused a social catastrophe, with millions of refugees fleeing the country. The government promptly pays the external debt, and sets its policies in agreement with the multinationals (via joint ventures with the government in oil and mining) and in favor of big national businessmen and the so-called military and civil “Boli-bourgeoisie.” The Maduro government also suspended all public-sector collective bargaining agreements, which led to a wave of strikes at the end of last year. In 2018, there was an increase in strikes by workers in the health care, education, cement, oil, and public sectors demanding a living wage and food provisions.

The pro-imperialist opposition is riding on the popular discontent, but the plans they intend to implement will only worsen people’s living conditions, while deepening the looting of national assets. The opposition’s calls for “freedom” and “democracy” actually implicate an economic program based on greater external indebtedness and the penetration of imperialist capital–that is, a colonial policy, and a reproduction of what is underway in Argentina and Brazil.

We warn that these plans of austerity and subordination to the IMF will aggravate the pressing hardship and want of the Venezuelan people.

The Left Front encourages Venezuelan workers to break into the scene as an independent force. The only alternative is to mobilize workers and the people against austerity and for expelling the pro-government bureaucracies from the unions, so that workers’ organizations can achieve political independence.

The working class must rule in Venezuela and give rise to a profound anti-capitalist reorganization of society that satisfies the pressing needs of the people. With this objective—based on our opposition to the attempted coup and any type of imperialist interference—we propose an emergency workers’ program that includes the following points: No to the payment of fraudulent external debt and forced repatriation of capital; no to joint ventures, 100% state-owned oil under the control of its workers and technicians; expropriation of the assets of those who have plundered the country, and to redirect those resources to meet the urgent needs of the people; full respect towards collective bargaining agreements and a salary equal to the living wage indexed to inflation; a real control of prices exercised directly by workers and communities, with rank-and-file delegates democratically elected in workplaces and communities; these delegates can transfer control over the whole of production and distribution to the people, without government or military bureaucrats; reinstate all laid-off workers; reject firings in both the public and private sectors; occupy any company that dismisses employees or threatens to close, and bring production under workers’ control, without military or government involvement; freedom and acquittal for all workers, peasants and activists who were arrested for protesting.

We call on Latin American workers to mobilize together throughout the continent against this coup attempt, and to fight for a workers’ political alternative for Venezuela and for the socialist unity of Latin America.