Police repression has become the means of enforcing the quarantine in Argentina. This model is already being copied in many other areas of the world. These draconian measures target working and oppressed people, worsening the effects of an already catastrophic pandemic. 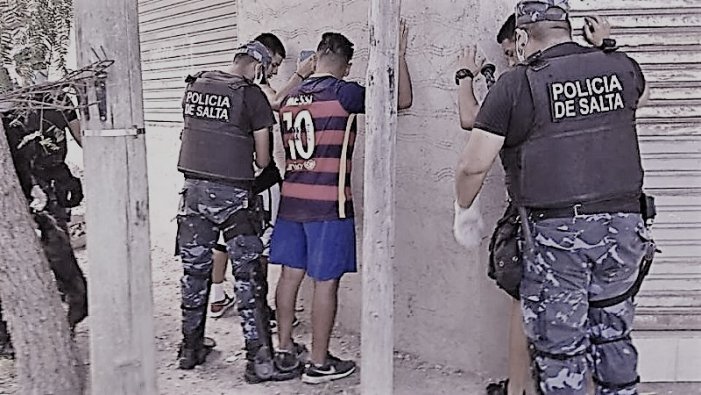 At 12AM Friday, March 20th, Argentine president Alberto Fernández issued a nationwide quarantine forcing people to stay in their homes except for medical purposes, work, and food shopping to reduce the spread of the COVID-19. To facilitate this, he has granted the police the power to stop people on the street and question them, demanding their ID and excuse for being outside. There have been numerous arrests since the quarantine was enacted, and there has been a series of violent or abusive interactions with the police. Even as the number of arrests increases by the day, the State has yet to allocate mass tests that would make the quarantine effective. These repressive measures must end immediately and be replaced with mass testing and treatment.

Furthermore, what does a stay-at-home order mean for those who are the most precarious in our society? What home is there for the homeless? How can the underemployed stay home when they need to work constantly to keep their homes? And what about those who work for companies that force them to work and risk infection? There are also countless people who are faced with abuse in their homes by partners or family members. “Just staying at home” is an impossibility for many; for others, it’s an even greater danger than the coronavirus.

In the city of Rosario in the province of Santa Fe, in one of the poorest neighborhoods in the city, police began harassing residents immediately after the quarantine was placed. In one horrifying example, a young woman was threatened and shot at by police. After other residents demanded she be let go—since the police had given no reason for stopping her — the police responded by shooting in the air and attacking the woman. In Argentina, this level of repression is not new. It is not unheard of for police to arrest poor people and for their bodies to be found elsewhere years later.

(Residents of Quilmes were forced to sing the national anthem and dance by police. This humiliation was done purely for the cops’ sadistic enjoyment, certainly not for protection against the virus.)

The reflex of punitive and harsh state measures isn’t something reserved for conservative parties. It is characteristic even of progressive governments that promise democratic measures; if at the end of the day they are subservient to capitalist profit and the exploitation of working people, they won’t enact measures to benefit workers and oppressed people during this pandemic. As we are seeing in Argentina, the state will resolve to take more punitive measures before it prioritizes programs that maintain people’s livelihood and safety, despite who’s in power. The current Peronist party came into power with progressive promises, yet it is abusing working people with state power and authoritarian measures, utilizing the same police force that terrorized people during the dictatorship and has continues to torture indigenous people today.

Just last weekend, an indigenous group known as Wichí complained about indigenous people being picked up by police during the quarantine and being tortured by them at station 43. This abuse isn’t new. These police regularly take people from indigenous communities — where children often starve to death — and bring them to the police station where guards take turns beating them. With or without the quarantine, the police are a force that regularly takes liberties to abuse the most precarious in society. With the police-facilitated quarantine, they’ve only been more empowered.

In the context of the current government’s repressive measures, actions that actually support the working class during the pandemic are critical. Even other measures being taken that do not directly involve the repressive arm of the state — such as a payment of 10,000 pesos to informal workers  and salary bonuses for health workers — are not enough. 10,000 pesos may possibly cover someone’s rent, but it cannot cover other expenses like utilities and food on top of that. Precarious workers who are likely out of work right now cannot survive with just 10,000 pesos.

Far more harm than good is being done with these small economic gestures on the one hand and harsh police repression on the other. Police repression must be eradicated, and the livelihoods of people must be made the priority. That means directing state funds toward healthcare to invest in better hospitals, free mass testing, and free treatment.

Furthermore, as the virus continues to spread, working class people around the world must denounce repressive measures taken in their nations and nations abroad. They must be vigilant and critical of actions that empower repressive forces in order to prevent the virus from becoming an excuse for more state-endorsed and state-enforced violence.

Programs and actions to protect working people have already been demanded by leadership in socialist parties and socialist publications around the world. In Argentina, the PTS (Socialist Workers’ Party) has denounced these repressive measures and has called for massive tests and healthy food to give to children in the barrios. In the U.S., Left Voice has developed a 10-point emergency program that prioritizes the health and livelihoods of working people and denounces all forms of repressive action that use the virus as a means to erode democratic rights.

Draconian measures will never resolve a pandemic or alleviate the conditions that create them, whether in Argentina, the United States, or anywhere else. When international emergencies arise, only a response by working class and oppressed peoples, unified across capitalist borders, can address the needs and prioritize the safety of the masses.