Socialists went to the US embassy to protest the US-Backed coup in Venezuela . 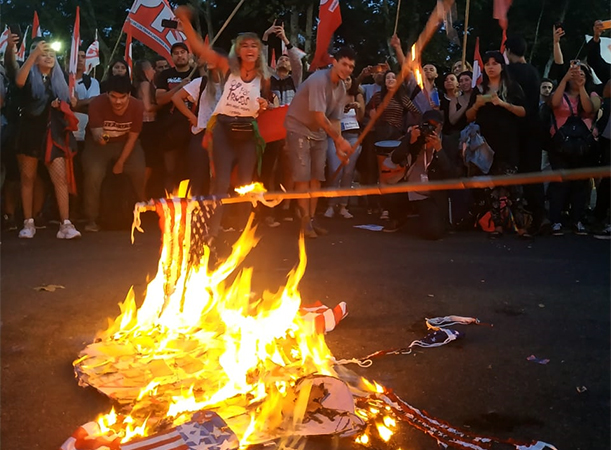 BUENOS AIRES—On Wednesday, the Frente de Izquiera y los Trabajadores (Workers’ Left Front), as well as other socialist parties, organized a rally in front of the U.S. embassy to repudiate the U.S.-led coup attempt in Venezuela.

In between chants of “Out with the imperialists, Latin America will be socialist,” speakers from the various political parties highlighted the need to fight U.S. intervention in Venezuela and opposition leader Juan Guaidó’s self-declaration as the country’s president.

The speakers argued that to justify the coup with democracy and human rights is dripping with hypocrisy, since it is the United State that is responsible for oppressing the people of the world, including by organizing coups and ousting democratically elected leaders around the world. 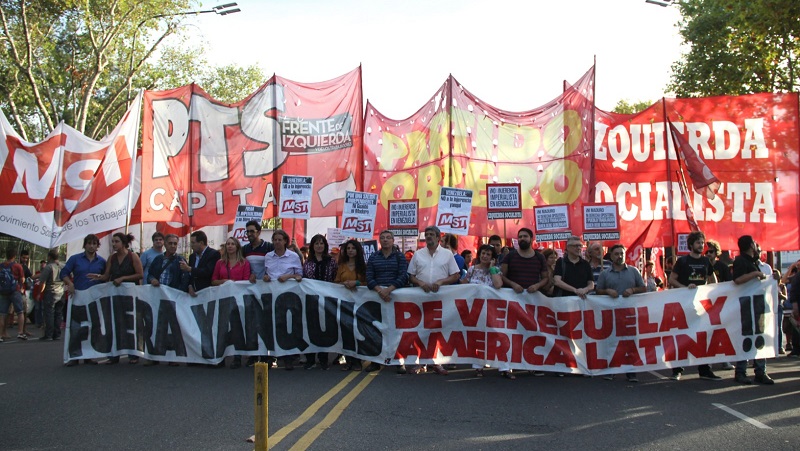 Chipi Castillo, for the Partido de Trabajadores Socialistas (Party of Socialist Workers), said, “This protest is in front of the embassy of a country that has a long history of interventions in Latin America. It took half of Mexico’s territory, and throughout the 19th and 20th centuries it sent troops over and over again to crush governments that did not do the United States’ bidding.” He also spoke about the failed attempts to defeat the Cuban Revolution at the Bay of Pigs, as well as the 2009 coup of Manuel Zelaya of Honduras, supported by the Obama administration.

Argentina has felt firsthand the effects of U.S. intervention, given that the U.S.-backed military dictatorship in Argentina killed tens of thousands of people.

The statement calling for the march also disputed the idea of a “dialogue” proposed by the European Union and the Catholic Church. The statement said, “We point out the interventionist character of those who push these objectives [a coup] through a supposed ‘mediation’ or ‘dialogue,’ whose goal is to sustain the economic and political extortion of Venezuela.”

Castillo continued, “All the Argentine working class must be clear. If this imperialist attempt triumphs, all the reactionary governments of the continent will be in a stronger position to implement the IMF’s plans to apply the hyper-exploitative labor reforms, to implement pension reforms.”

At the same time, the statement calling for the action did not support Maduro’s government. It says, “Our repudiation of the imperialist coup does not imply any political support for the Bolivarian regime, which is responsible for having led the Venezuelan people to a dead end.” Maduro, like Chávez, governed in favor of large multinational corporations, and continued to pay the foreign debt. In the meantime, workers in Venezuela live on $6 a day.

“The pro-U.S. opposition tries to capitalize on the popular discontent generated by Chavista austerity. But if the imperialists prevail, they will only enable the United States’ economic recolonization of Venezuela,  which will bring even more austerity and worsen poverty,” stated the call to action. 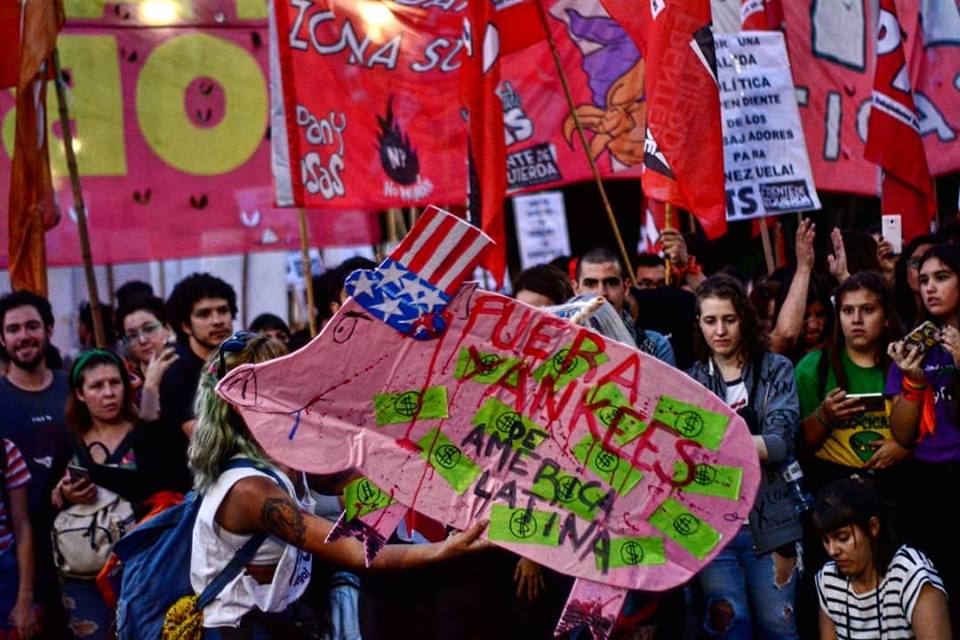 The speakers argued that the alternative is to mobilize the working class and poor people against the imperialist coup attempt and to organize a working-class emergency plan, including stopping the payment of the foreign debt, nationalizing the oil industry (as opposed to the mixed private and public industry, as it is now), freedom for political prisoners, working-class control of production and distribution and more.

Chipi Castillo ended the march by saying, “It is the workers and socialist left that hold up the flag of anti-imperialism because we know that the liberation of our continent will only come from a workers government and the socialist unity of Latin America, not from the national bourgeoisie, which always end up capitulating.”