After a day of nationwide protests on Monday, Argentine workers participated in mass work stoppages on Tuesday. Many of the country’s streets and avenues were practically deserted as public transportation workers and private-sector employees stayed home. It was perhaps the most forceful of the four national strikes that have been organized so far during the administration of President Mauricio Macri.

Left-wing unions and workers called for unified action, organizing picket lines under their own banners, even as Argentina’s major union federations—the General Confederation of Labor (CGT) and the Argentine Workers’ Central Union (CTA)—failed to do so. Instead, the union federation leaders held a press conference to demand an agreement with the government to halt the dramatic rise in unemployment.

“If there is no plan B, there will be no truce with the Argentine workers’ movement,” said Juan Carlos Schmid, of the dredge workers’ union. Héctor Daer, of the sanitation workers’ union, declared that “the CGT will lead the actions that it believes are necessary for the government to change its course.” But no new union actions were announced, and the union federation leaders did not explain how they plan to continue the struggle against Macri’s austerity measures.

Since the last national strike on June 25, millions of working families have only seen their economic conditions worsen, as the country’s annual inflation rate has soared to a staggering 42%. So far this year, the Argentine peso has been devalued by 100%. The economy shrank 4.2% in the last quarter, the unemployment rate is now at almost 10% and the worst is yet to come.

Yet President Macri, like the union federations, has shown no signs of changing course. While workers went on strike and took to the streets, Macri held a meeting at the United Nations headquarters with Christine Lagarde, head of the IMF, to negotiate a new loan agreement, after having secured a $50 billion standby arrangement in June.

The first disbursement under the June deal has since evaporated, as the country faces a major currency crisis, increased macroeconomic instability and brutal austerity policies implemented by the national and provincial governments to meet the IMF’s demands. This is a far cry from the promises Macri made at the beginning of his term, when he said he would immediately end inflation, achieve zero poverty and produce a “shower of investments” in the country. The president has since changed his tune, no longer bragging Trump-style about having the “best team in the past 50 years.” The trumpet blowing has been replaced by claims that “we’re not a perfect team, but we have good intentions,” or the hardly reassuring “things may be tough, but at least we’re not Venezuela.” 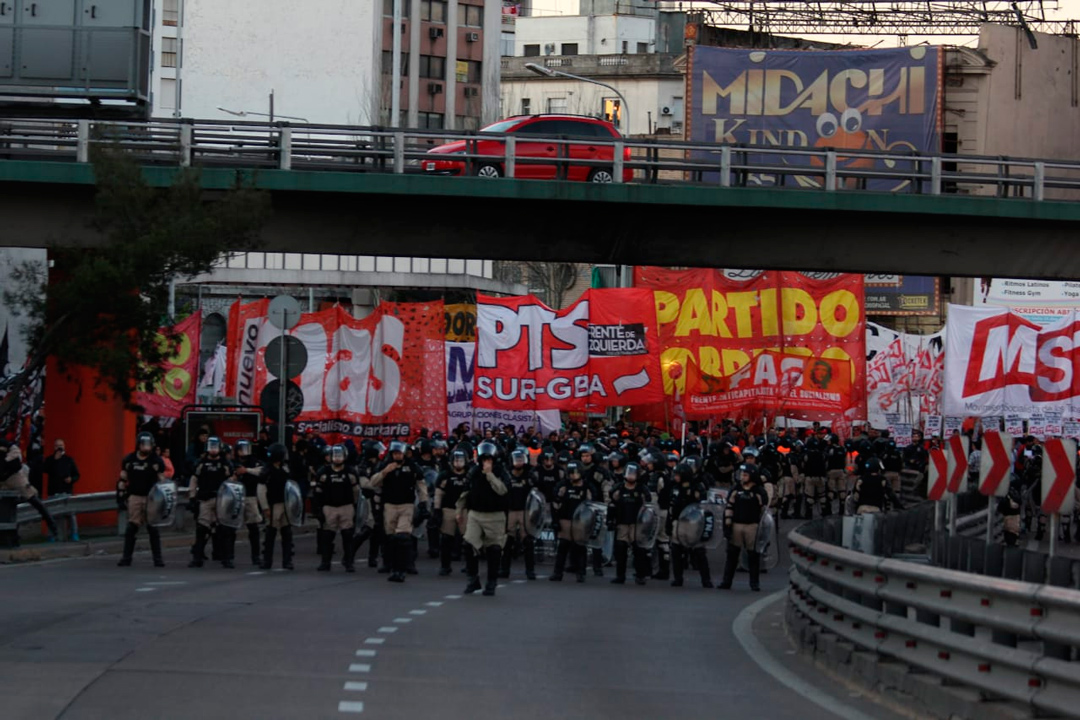 Meanwhile, in the midst of the administration’s internal crisis, Luis Caputo, the president of the Central Bank, resigned on Tuesday, the same day of the national strike. His term lasted only three months, but during that time the price of the U.S. dollar increased by 34%, and interest rates rose to 60% in a trend that will only worsen the economic downturn. The government has denied that Caputo’s exit was a condition for closing a deal with the IMF, but it is well known that the outgoing official had expressed differences with the IMF over monetary policy. The administration has virtually handed the control of the country’s economy to IMF authorities, and it now plans to reach an agreement with Peronist governors to pass a new budget that will only mean more austerity for working-class families.

The Argentine Left and Workers’ Front (Frente de Izquierda y los Trabajadores) is waging difficult battles against unemployment and austerity, and it has denounced not only Macri’s policies and IMF interference but also the complicity of Peronist governors and lawmakers, who have provided essential support to the administration’s policies. Against leaders of the opposition calling for change at the ballot boxes next year, the Left Front calls for mass assemblies in schools and workplaces throughout the country to prepare for a general strike with mobilizations to stop the administration’s policies. The brutal attack against the Argentina’s working class is happening now; the struggle against it must also take place now.