Armenia and Azerbaijan: On the Brink of War Again?

The clashes in the separatist region of Nagorno-Karabakh in Azerbaijan could turn into a full-scale conflict involving other regional powers. With economic, health, and ecological crises rising worldwide, geopolitical conflicts and capitalist aggression will also increase. 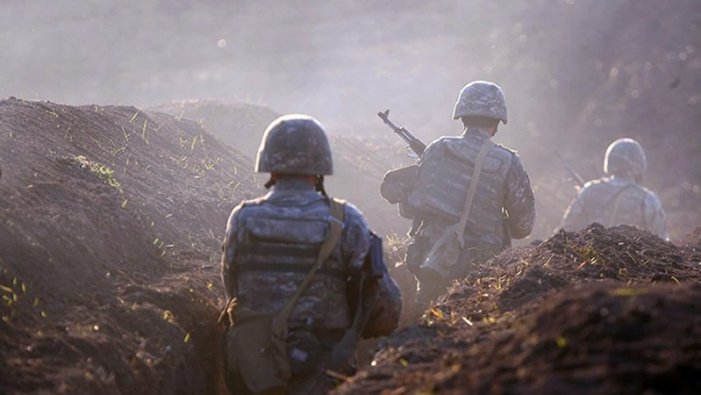 On Sunday, violent clashes took place between the Azeri army and the armed forces of the separatist region of Nagorno-Karabakh, supported by Armenia. At least 23 people died and over 100 were wounded, including civilians.

Armenian prime minister Nikol Pashinyan said that in response to Azeri aggression, the Armenian army destroyed two helicopters, three tanks, and several drones. The Azeri government claims to have dismantled 12 Armenian antiaircraft batteries and taken control of several villages in Nagorno-Karabakh and the region controlled by the Armenian armed forces.

Nagorno-Karabakh is a disputed territory that is internationally recognized as a part of Azerbaijan; the region is, however, under the de facto rule of the Republic of Artsakh, a predominantly Armenian independent state. The dispute between Armenia and Azerbaijan has persisted since 1936, when Stalin, during the process of national delimitation within the USSR, gave Azerbaijan control over the territory. With the fall of the Soviet Union, a war broke out between the two states from 1992 to 1994, in which 30,000 people died and up to a million were displaced, making it the bloodiest post-Soviet conflict. Despite a ceasefire signed in 1994, the situation remains deadlocked, and confrontations between the two armies have occurred periodically ever since. These tensions reached a boiling point in 2016, when over 200 people were killed in clashes.

Most recently, 16 service members were killed in July during major skirmishes between the two countries. But this Sunday’s incidents appear to be the most serious in recent years, and many observers and politicians on both sides point to a high risk of large-scale confrontation.

An extended conflict between these two countries could have incalculable consequences because it could push regional powers to intervene. Turkey, Azerbaijan’s main ally, has declared its unconditional support. Meanwhile, Turkey and Armenia do not have formal relations. Turkish president Recep Erdogan accused Armenia of being the “biggest threat to peace in the region,” and even called on the Armenians to rebel against their leaders, who he said are “dragging them to catastrophe.” Armenian prime minister Nikol Pashinyan fired back, claiming that Azeri forces had initiated the clashes and asking the international community to deter Turkish involvement.

Russian president Vladimir Putin has called for an immediate end to the hostilities in the strategic region, which is vital for its own defense. Russia is a close ally of Armenia — it is the landlocked country’s largest trading partner and accounts for nearly all its energy imports. Yet Russia also has important economic interests in Azerbaijan, which in recent years has purchased many weapons from both Russia and Israel. Russia is thus trying to avoid a confrontation and hopes to be the arbiter of the conflict by maintaining good diplomatic, economic, and military ties with both countries.

Although the immediate cause of the clashes on Sunday is unclear, recent events provide some clues. Azerbaijan is an oil- and gas-rich country that in recent years has spent large amounts of money on military equipment. At the same time, it aspires to export its gas to Europe from its deposits in the Caspian Sea through the South Caucasus Pipeline Expansion Project (SCPX), an oil pipeline from Azerbaijan to Turkey through Georgia that will extend to Europe in the longer term. With the guarantors of the peace process (Russia, France, and the United States) caught up in important international and domestic issues, Azerbaijan could have decided to shift the balance of power in its favor in Nagorno-Karabakh. The disputed territory is an important corridor for transporting oil and gas, and it thus permanently threatens pipelines to Western and regional markets.

If 🇦🇲 Armenia deems 🇦🇿 Azerbaijan escalated too far, it could attack 🇦🇿's SCPX pipeline that delivers gas to 🇹🇷's TANAP & then to TAP – the 🇪🇺's Southern Gas Corridor to the EU) |

It is precisely in these gas projects that the key to the Turkish position and that of the other powers must be found. Turkey’s ambition is to become an essential center for the transit of gas to the European market; therefore, it has plans to send Azeri and Russian gas pipelines through its territory, and with the discovery of gas fields in the Black Sea, Ankara claims to become in turn an exporter of gas to Europe. This also explains the risks of the tense situation in the eastern Mediterranean. Russia wants to play a role as an arbiter in the region, but at the same time it sees Azerbaijan’s plans as competition for its own gas-export plans to Europe.

Either way, it is clear that in a world increasingly submerged in economic, health, and ecological crises, geopolitical conflicts and capitalist aggression will increase. An “accident” can trigger conflicts whose consequences can be incalculable.

First published in Spanish on September 28 in La Izquierda Diario.