As Bullets Rain Down on Protesters, Bolivia’s Armed Forces Are Granted Full Immunity

On November 15th, Bolivia’s self-proclaimed right-wing transitional government approved a decree that allows the armed forces full license to suppress anti-coup demonstrations. They will be exempt from criminal responsibility for any measures they take to restore order to Bolivia’s streets, including using live ammunition against protesters. 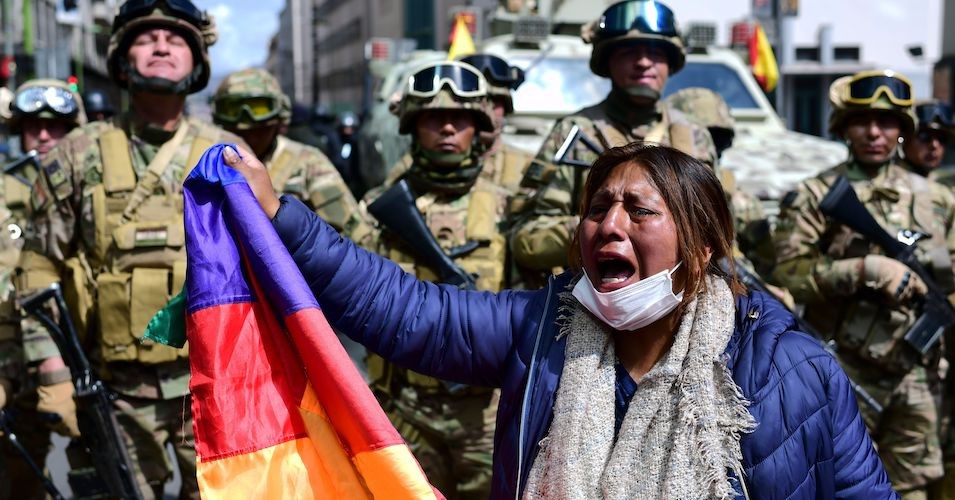 On November 10th, there was a right wing coup in Bolivia led by the military, the police, the Catholic Church, and the country’s agribusiness. The coup was also supported by the US imperialist machine. Since then indigenous and working class groups have been fighting against these forces, building self-defense committees and blocking roads around Bolivia. The police and armed forces have responded with brutal violence and suppression.

As of November 15, the armed forces will not be held liable for any of the violent acts committed. The self-proclaimed transitional government approved Supreme Decree No. 4078, which exempts the Armed Forces from criminal responsibility during acts of repression. It states

The personnel of the Armed Forces, who participated in the operations for the restoration of internal order and public stability, will be exempt from criminal responsibility, when in compliance with their constitutional functions, they act in legitimate defense or state of necessity, in observance of the principles of legality, absolute necessity and proportionality of conformity.

This regulation claims to “restore order” in Bolivia and enables the military to act with impunity. Even before the decree, there were already many deaths and horrid acts of violence. The decree will only allow the further brutality of an armed force that has put its power against the indigenous and working class people of Bolivia.

The coup government has gone even further to support the military. Jeanine Áñez, the self-proclaimed president of Bolivia ordered an increase of 34,796,098 Bolivian pesos (more than $5 million) for the Armed Forces’ budget. Article 2 specifies that the funds are for military equipment.

The Coup Government Is Using Live Ammunition Against the Resistance

Despite all of this, there is a heroic resistance growing against the coup. Indigenous people, peasants, miners and other sectors of the working class are organizing mass assemblies to fight back. They are creating self defense committees, blocking roads around the country, forcing much of the country to a standstill, and organizing mass marches. All of these actions have a rallying cry, a demand that Jeanine Áñez resign her ill begotten seat as President of Bolivia.

In reaction to this community organizing, the growing power and budget of the military is on full display. One of the most brutal examples of this new military impunity came on Tuesday, November 19th, when the police approached a blockade at the Senkata gas plant in El Alto. Protesters were able to cut off access to a major source of fuel for the city of El Paz. In response, the state approached the plant with helicopters, armed cars and tanks. The violent clash ended with three people dead and over 25 wounded.

As Betina, a leader of the Senkata plant barricade, reported “They’re killing us, shooting from helicopters and there is no Bolivian media. Therefore they don’t show the country what is going on. They don’t care about women or children, nothing. Let all the people you can know because this is a massacre.”

Meanwhile, a representative from the government has a different take on the events at the Senkata gas plant. Fernando López, the Minister of Defense, claims that the deaths at Senkata did not happen and that the protesters were paid “money, alcohol, and coca.”