As Coronavirus Decimates Ecuador, Other Poor Countries Wait Their Turn in Horror

Bodies infected with COVID-19 are being dumped in the street of Guayaquil, Ecuador by security forces. That is what capitalism has in store for huge swaths of the least-developed countries of the world. 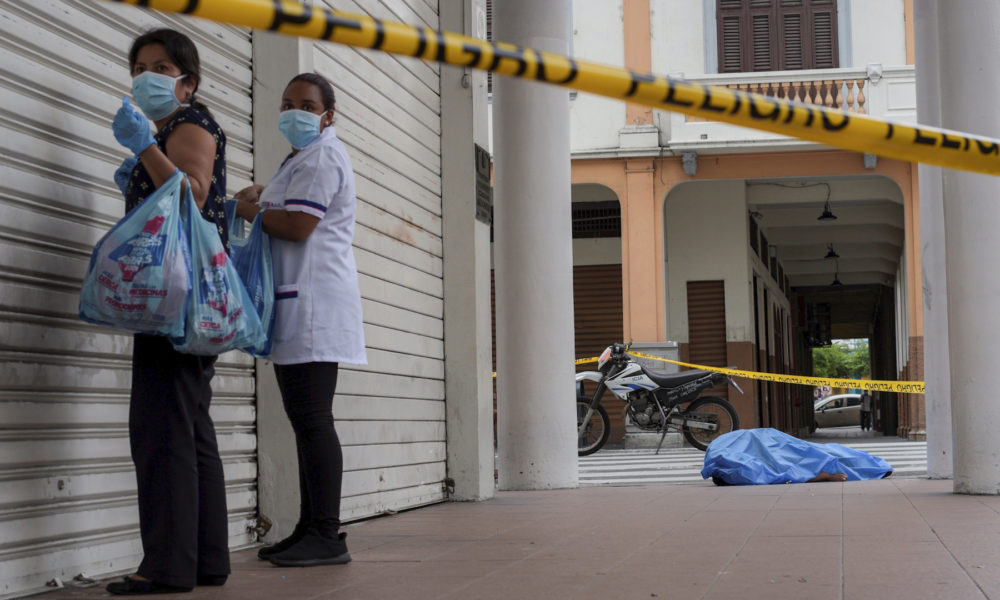 Bodies on the streets of Guayaquil (Photo: stringer/Reuters)

Less than six months ago, a protest movement wracked Ecuador — one of Latin America’s poorest countries. The government of Lenín Moreno, which at first tried to crush the uprising with brutal and violent repression, was forced by the mass mobilization of workers, indigenous people, and impoverished youth to rescind Decree 833, which cut fuel subsidies to support an austerity plan demanded by the International Monetary Fund (IMF) in exchange for a $4.2 billion loan aimed at halting an economic recession.

There was jubilation in the streets of the capital Quito. But it was a limited and very partial victory — in large part because of a lack of genuine revolutionary leadership that would have pushed further to realize the demand of “Out with Moreno!” Now the streets of Ecuador, particularly in the southern port city of Guayaquil (Ecuador’s largest city), are again filled with people — but in a horrifyingly different way, as videos across the world’s social media show.

Guayaquil is the epicenter of the pandemic in Ecuador. The Washington Post goes even further, calling it the epicenter for all of Latin America. The virus appears to have been introduced to the Guayas province by wealthy residents returning from vacations in Europe and the United States. But those now bearing the brunt are the city’s poor, whose neighborhoods ring the central city and who suffer the worst from the epic collapse of the country’s health system from an ongoing neoliberal assault of underfunding and neglect.

In 2018, more than 2,000 health professionals across the country were laid off as part of a general plan to cut back the public sector. Now, the government is begging for “volunteers” to help confront the pandemic.

Gabriela Ruiz Agila, a researcher in Guayaquil, described the situation to La Izquierda Diario. “Part of the city is under quarantine,” she explained, “but another part is dying in their homes. There are bodies on the sidewalks and bodies in the streets. There is no one to remove the bodies, and this is the other health emergency.” Overwhelmed morgues have closed throughout the country. Funeral parlors have stopped collecting bodies. There are reports and some videos of health workers removing bodies in secret from hospitals because they have no place else to put them. Police assigned to collect bodies have been seen carting them from hospitals to poor and working class neighborhoods and dumping them.

All this can only make the spread of COVID-19 even worse. One Guayaquil resident described to the Washington Post that the body of a neighbor, “wrapped in a plastic tarp, swollen, already attracting flies” was lying in front of his impoverished home and “had been out in the tropical heat for six days.”

Ruiz describes “families wandering around to be cared for or be admitted at a public hospital where there are no more beds. The doors are closed to them. They are left outside. Nurses come out to put them on oxygen.” She says that the province has been militarized as a security zone, and says videos show people in the streets being whipped by police. This shows what’s in store soon for the world’s poorest countries, such as the disaster looming in Africa.

CNN shows the “morbid new reality” of the coronavirus in Ecuador

All this in a city where poor neighborhoods have no drinking water, let alone water to wash their hands. In those same neighborhoods, reports are that families have begun to burn the bodies of their relatives who have died at home, and that vultures are appearing.

Videos from Ceibos Hospital in Guayaquil show corpses piled in the cellar as well as next to patients. “The dead,” Ruiz said, “also appear to be dumped next to garbage containers.” Meanwhile, Vice President Otto Sonnenholzner, demanding that the poor stay home, said, “If they don’t cooperate, we’ll have to decide who to save or not.”

What little health care is being provided to Ecuador’s poorest and most vulnerable is coming under conditions wrought by the deliberate destruction of the health care system. The country has very few of the tests used in the wealthier parts of the world, which ensures that the official numbers of infections and deaths are far lower than reality. At this writing, we do know that the number of fatalities is exceeded only by Brazil on the Latin American continent — but Ecuador’s population is roughly 8 percent of Brazil’s, which speaks volumes.

Medical volunteers walk the streets of the main cities, including Guayaquil, distributing masks and disinfectant gel, but they’re encountering people collapsing and dying in the streets before their very eyes.

While the Moreno government scrambles without any of the aid the president promised was on its way from wealthier countries, it continues its attacks on working people and the most impoverished sectors of the Ecuadorean population. As the pandemic began to ravage the country, Moreno announced further sharp cuts in public spending, hitting thousands of state workers in particular very hard. He is pushing forward with widespread privatization plans on behalf of the IMF.

Meanwhile, Ecuador’s largest companies are seizing the opportunity to increase their exploitation of the Ecuadorean masses. Many are forcing workers who should be home to come to factories. They are cutting off basic services such as electricity and water to those in the working class who enjoy these “luxuries.” Internet service has become sporadic at best.

When the masses pushed back and defeated Moreno’s Decree 833 last October, it was clearly not enough. The movement’s inability to turn opposition to the austerity plan into a direct challenge to the capitalist system itself has left the Ecuadorean capitalists in charge, and the result are the streets of death in Guayaquil and throughout the country. Ecuador needs a government of workers and the indigenous peoples.

But the immediate task is to save lives, and that will require taking the response to the crisis out of the hands of the murderers in Quito and in the country’s corporate boardrooms. Right now, Ecuador needs an emergency plan, under workers’ control, that injects the national treasury’s funds — along with additional funds taken from the accounts of the big companies and wealthy capitalists — into the health system, guaranteeing sanitary conditions for its workers, rehiring every furloughed doctor, nurse, and medical technician in the country, and getting access to tests and ventilators.

There must be an immediate moratorium on rents and utility payments. No one can be laid off; instead, wages must be paid in full — even for workers who remain at home. For others, there

must be a guaranteed “quarantine salary” to ensure those with precarious jobs or who are unemployed — a massive percentage of the population — can stay at home, care for themselves and their families, and be fed.

Ecuador is not without industry. The food, textile, and heavy machinery industries in the country must be put under immediate workers’ control so production can be restructured to meet the needs of the people, not the capitalists. In factories around the world, workers are demanding changes. In some, they’ve already taken control; in others, that is the obvious next step. Hospitals managers, used to running austere health factories, are being pushed out of their decision-making positions by doctors and nurses.

Reports of this kind of working-class action will be spreading as the coronavirus spreads. We can only hope it will not be too late for places such as Ecuador.