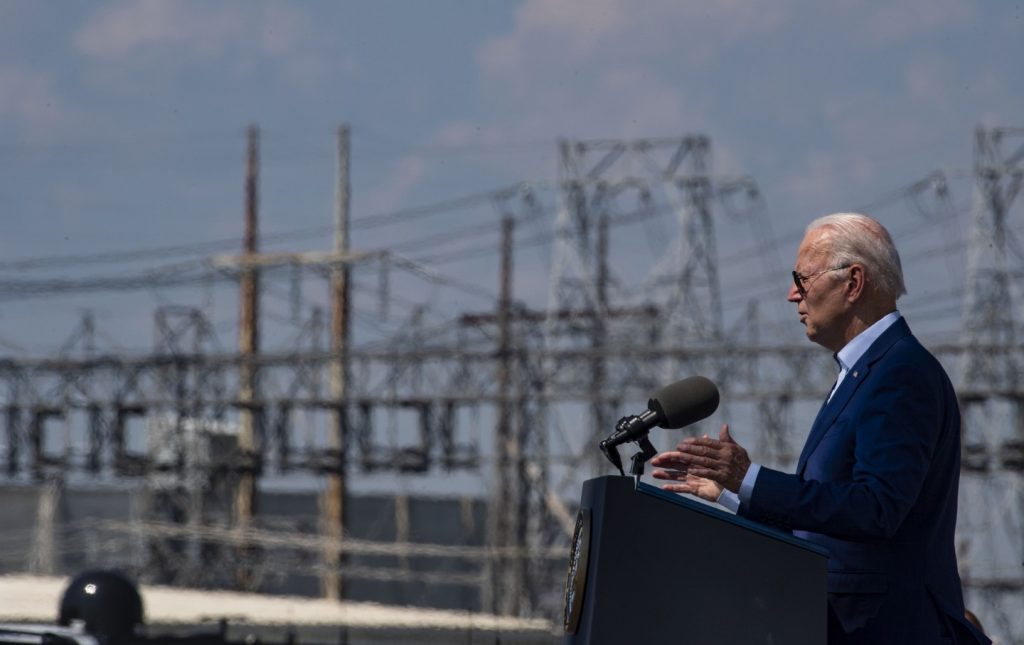 Pressure is mounting on the Biden administration to act as dangers of the climate crisis rapidly emerge across the planet. Despite immediate threats, Biden continues to enact climate destruction policies and is pushing aside his executive authority to act during this globally volatile moment.

Over 1,000 heat-related deaths have been reported across Portugal and Spain since July 7 and Spanish authorities have reported over thirty active fires. Temperatures in France climbed as high as 40.8℃ (105.44℉) last Sunday as a “monster octopus” wildfire twice the size of Paris spread uncontrollably. Over 100 million Americans are under heat advisories. Meanwhile, severe thunderstorms in New York City caused torrential flooding in public subways and the creation of a 20-foot deep and 58-foot long sinkhole. Britain reached 40ºC (104℉) for the first time in recorded history on Tuesday, disrupting trains and resulting in the busiest day for the London Fire Brigade since World War II.

As many watch with horror as the world burns, capitalists invested in the U.S. political system remain cool as Biden continues to kick the can on climate action.

Despite the many tools Biden has available to address this emergency, the mainstream media’s focus remains directed at West Virginia Senator and Big Oil-beneficiary Joe Manchin, who recently refused to support any legislative efforts to combat the climate crisis.

Manchin has been a staunch defender of capital and an adversary of the working class throughout his tenure in the U.S. Congress. The Senator’s appetite for collateral damage while lining his pockets with money from fossil fuel interests, pharmaceutical corporations, and pro-Israel groups has perhaps never been more on display than during the Biden Administration, where Manchin has played the role of boogeyman, torpedoing almost every major spending bill proposed by both Biden and his party.

Regardless of how crooked Manchin is, the reality is that the entire Democratic Party, as a capitalist political institution with Biden at the helm, is as culpable as the climate change deniers across the political aisle.

When campaigning in 2020, Biden pledged to end drilling on federal lands. Yet in the first six months of his presidency, Biden signed off on thousands of permits to drill on tribal and federal lands -– a rate not seen since George W. Bush was in office.

In August of last year, the White House released a chilling statement regarding global fuel markets. The statement called for “competitive energy markets” and “stable energy supplies” in order to support international recoveries following the first two years of the Covid-19 pandemic. Biden’s White House was essentially urging the Organization of the Petroleum Exporting Countries (OPEC) — of which the United States is not a member -— to drill as much as possible. As Sam Carliner of Left Voice noted back in November, the Biden administration effectively “endorsed the industry most responsible for carbon emissions and the wide-scale destruction of land and sea via oil spills” under the guise of healing the public after two years of a global pandemic.

Biden’s pro-capital and anti-climate stance took on a physically violent form last June when more than 100 water protesters were arrested in Minnesota during an Indigineous-led resistance surrounding the expansion of the Line 3 pipeline. Despite the anti-pipeline actions consisting of peaceful blockades, the state’s police response turned violent. Reporting at The Intercept exposed that the militarized police forces confronting the water protectors were bankrolled by the Enbridge corporation, the private Canadian company responsible for the pipeline’s expansion. Biden’s inaction against Enbridge and its private funding of police also displays Biden’s pro-police politics.

In a similar case, Biden again sided with capital by remaining silent during the Chevron’s persecution of Steven Donziger -– the human rights lawyer who won a $9.5 billion settlement against the company for its mass pollution of the Amazon rainforest -– despite the United Nations High Commissioner on Human Rights calling for the immediate release of Donziger and stating that his imprisonment was illegal under international law.

Donziger, who was released earlier this year after 993 days of both carceral imprisonment and house-arrest, demonstrates yet again where Biden’s loyalty lies in the struggle for the future of the planet against the inevitable doomsday of capital accumulation.

Arguably the biggest roadblock that combatants of the climate crisis face today is the military industrial complex. Any possible limits on greenhouse gas emissions that the U.S. implements will ultimately be for naught if the state remains highly militarized.

The U.S. military has been one of the greatest contributors to the climate crisis in the 20th century. It releases tens of millions of metric tons of greenhouse gasses annually, largely due to industrial emissions. The U.S. defense budget, which has increased every year since 2015, has risen to nearly $1 trillion annually. Last week, the House of Representatives passed a proposed $839 billion military budget — $37 billion more than Biden requested — with the support of 180 Democrats.

Given the importance of the military in securing U.S. imperialist interests, this form of military-driven ecological destruction is unlikely to go away. The odds of the U.S. war machine restraining itself becomes more unlikely when one considers the country’s relations with egregious human rights-violating states like Saudi Arabia and Israel, the U.S. arms-flooded war in Ukraine, and the rising New Cold War against Russia and China. With the U.S. Congress voting overwhelmingly in favor of expanding NATO (of which all House Democrats voted in support), U.S. imperialism appears more determined than ever to maintain its goal of a world dictated by a unipolar and U.S.-sanctioned rules-based order.

The Capitalist System Is to Blame

It is not simply individual ghouls like Manchin or even Biden that are to blame for this destructive path. Life-threatening heat waves across both the U.S. and Europe, as well as the increasing emergence of unprecedented weather events are the product of centuries of a destructive capitalist system. A program based on collective planning and the fastest possible transition to renewable energy could keep the worst outcomes of the climate emergency from materializing. However the American political class offers no such possibility due to its ties to the worlds’ largest polluters, and to the environmental degradation and extraction inherent to capitalism.

Where, then, should we turn? What is to be done? There is no path to climate salvation if we leave our future in the hands of the bourgeoisie. As socialists, we must fight for every reform that addresses climate change, but also understand that to build a system that puts people and the climate above profits, we will need to end capitalism. The climate crisis is the largest global battle that looms before us, and the struggle must be led by the united, multiracial, and diverse working class. We must oppose imperialism and militarism at all times -– especially those of us based in the United States.

Our struggle must dismantle capitalism because capitalism is the cause of the planet’s and is at the root of all of our struggles. The sooner that we unite our collective plights and form a global working class that is unwavering in its demands and unrivaled in its internationalism, the sooner we can wrestle the fate of the planet away from the reckless capitalist class. The time left to achieve our goal is running out, but victory is still possible. 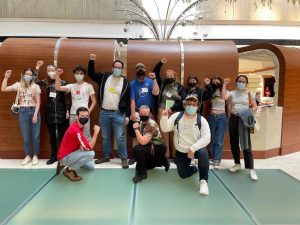 Comrades in Coffee Fight to Certify Union in Detroit

Comrades in Coffee, a group of striking Detroit baristas, continue their picket of Great Lakes Coffee for over 130 days as they await the result of a long, convoluted NLRB hearing.