For two weeks, fruit workers have been on strike for safer working conditions and hazard pay. The strike has gained momentum, with more and more workers joining the picket line. However, threats of violence have emerged as well, targeting this predominantly Latinx workforce. 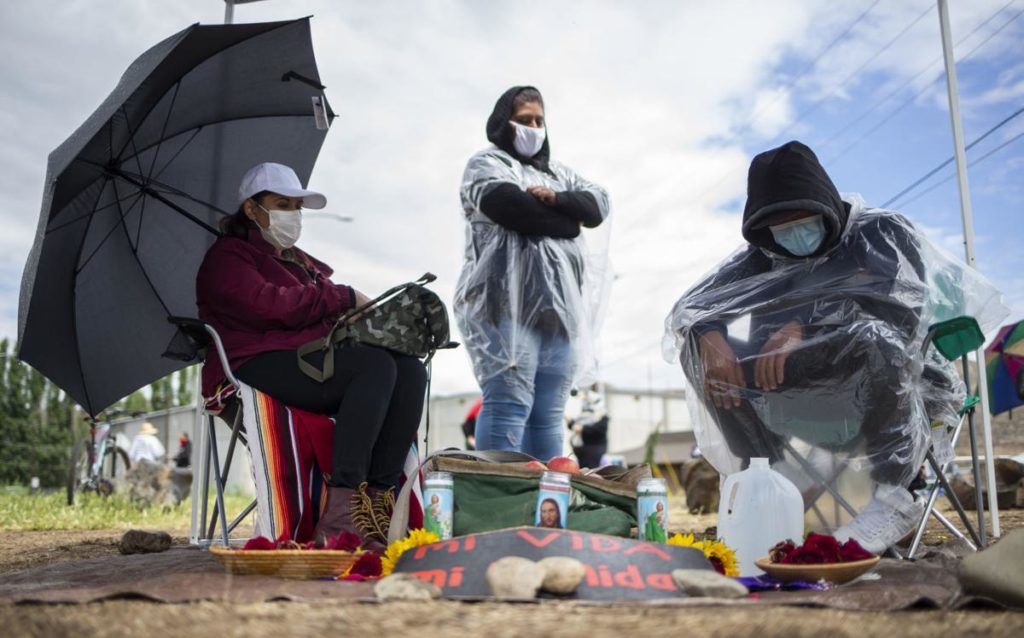 On May 7, the Allan Brothers Fruit warehouse workers staged their first walkout. After twelve co-workers had tested positive for COVID-19, the company still had yet to issue any safety equipment and the anger and fear in the workforce was growing. Now, two weeks later, the strikes have continued and are growing in number, with nearby fruit warehouses joining the struggle. A vital part of the food supply chain remains unsafe, and the workers are fighting for what is needed to survive this pandemic.

Started by the Allan Brothers Fruit workers, many more fruit packing warehouses and hundreds of their workers have joined together against the lack of PPE and hazard pay that has become standard in the industry. As of the publication of this article, more and more companies across Washington State have seen their workforce unite: Hansen Fruit; Columbia Reach; Jack Frost Fruit Co; Matson Fruit Co; and Monson Fruit are just a few. The warehouse plants themselves are not unionized, and all the strike actions are being led by the workers themselves with the help of an independent farmworkers union, Familias Unidas por la Justicia. The demands are the same across the board: safer working conditions and $2 more an hour in hazard pay.

Deemed “essential,” fruit warehouse workers are forced to work shoulder to shoulder and have not been given sufficient  PPE during the outbreak. The majority of the workers are Mexican and Central American immigrants, a precarious labor force with few legal protections left. The strikers hold signs in both English and Spanish, declaring, “Farmworkers are essential, not disposable.” A leader of the strike at Allan Brothers, Agustin Lopez, says, “We need protections at work, like adequate masks, and we want tests. How do we even know if any of us have been infected if there are no tests?”

In the face of these demands, Allan Brothers has offered only the promise of unpaid leave if the workers put in five weeks first. The company has also offered $1 more an hour for only one month of work with no mention of access to PPE. These offers have been declined and the picket line is only growing larger. Two workers have gone on hunger strike in an attempt to win the desperately needed demands.

However, there have been some gains already. In Roche Fruit company, there was a walkout after two workers had become infected. The company then offered them a tepid $200 a month extra as “gratitude pay,” and another walkout followed on May 11. Eventually, an extra $100 a week was provided for all the employees and the strike ended.

While the protests are growing, they are becoming more and more dangerous. On Thursday, a man harassed strikers while driving down the road near the protest, screaming, “I am going to get my 50-caliber gun and come back and shoot you all.” The police eventually arrested the man, Stacey Sedge. According to court documents, Sedge believed that the Allan Brothers Company treated “those people” very well and they had no right to protesting. When asked to clarify, he confirmed by “those people” he meant Mexicans. This is an example of how, as tensions grow, white “vigilante justice” and the over policing of Black and Brown communities is on the rise.

Despite these growing concerns, the strikers all continue to fight for what is owed to them with more and more workers joining the picket line. This is part of the growing wave of essential workers mobilizing for their rights in their workplaces, such as Amazon, Instacart and Whole Foods workers. As states re-open, a large swath of workers are being forced back to work, oftentimes into workplaces that are not held to any government regulations that protect their employees. We are likely to see more wildcat strikes — strikes not tied to their union bureaucracy, but led by the rank and file workers themselves. There is power in the people when they join forces to fight against the true enemies of the working class, the capitalists and the capitalist governments that work in their favor.