With thousands of Haitians in the streets for weeks calling for Prime Minister Ariel Henry’s resignation, the U.S.-backed regime is requesting foreign intervention. The international working class must show solidarity with Haiti and all nations rising up against austerity and imperialism. 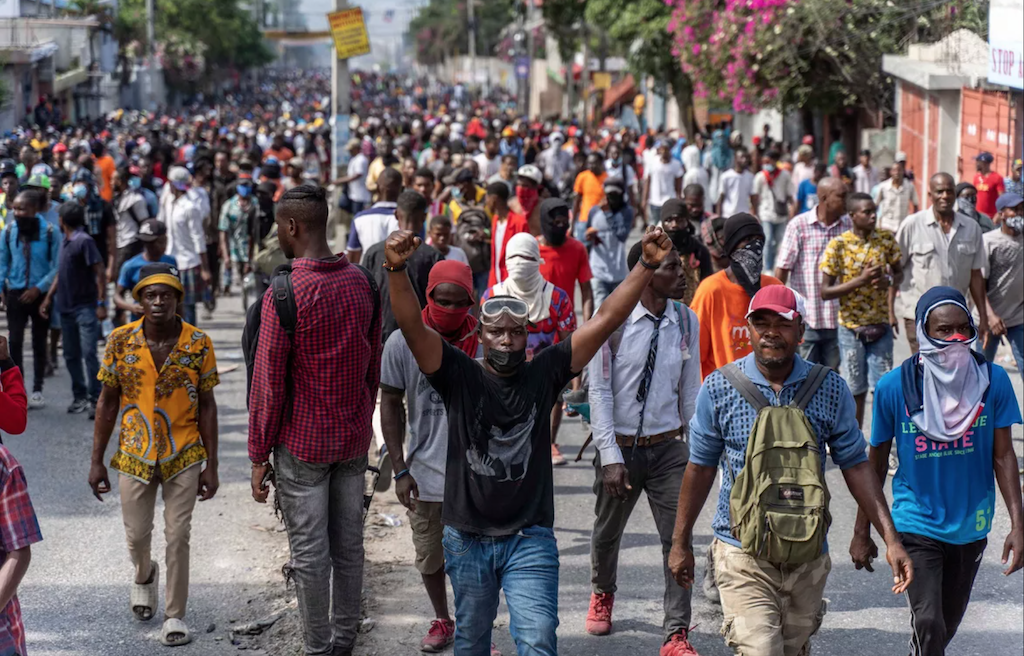 Massive protests in Haiti are challenging the regime of U.S.-backed Prime Minister Ariel Henry. For the last several weeks, the Hatian people have packed the streets of the country’s major cities to demand the resignation of Henry, who holds no democratic mandate. To protect his regime, he is now calling for intervention from foreign troops.

Haiti has been in a regular state of uprising for almost three years, sparked by former President Jovenel Moïse’s attempt to extend his term past its limit. At the height of the uprising, in July 2021, Moïse was assassinated. The circumstances of the incident, including the identity and motives of the perpetrators, are still unclear. Following the assassination, Henry took power and, like his predecessor, he has no interest in addressing corruption in the country and resolving the dire economic crisis that the Haitian people are facing. Henry’s interests are in maintaining the relationship between Haitian capital and the imperialist powers that plunder the country. This is the very relationship that keeps the Haitian people in intense poverty.

The global cost-of-living crisis is especially severe in Haiti. Inflation in the country reached 29 percent in August and gasoline is virtually unavailable. Hospitals are closing just as clean water shortages are prompting a cholera outbreak. Police have responded to the people’s outrage with violence. Gangs are also exploiting the crises, with one gang even blockading the country’s main port. The role of the gangs is Henry’s main justification for requesting foreign intervention; however, prominent activists on the ground have pointed out that these gangs are tied to the government.

Hatian capital will use whatever forces it has at its disposal, be they police or extralegal gangs, to repress social movements in the country. Historical precedent and the current calls for intervention show that should the domestic forces of state repression fail, imperialist forces will step in to ensure their interests are not threatened.

Ever since Haiti became the home of the world’s only successful slave revolution, imperialist powers have sought to make an example out of the Haitian people. Haiti has faced near constant attacks on its sovereignty since it first won self-determination. The United States intervened directly in Haiti in 1915 after the president was assassinated. Then, U.S. President Woodrow Wilson sent the Marines in. The U.S. military would occupy the country until 1934.

In the 21st Century alone, the United States and France orchestrated a military coup of the country’s first ever democratically elected president. Following this, the United Nations established the MINUSTAH program ostensibly to bring stability back to Haiti. In reality it was a military occupation which ran from 2007 to 2014 and subjected the Haitian people to obscene crimes including hundreds of cases of sexual abuse against children. It should be noted that many of the so-called Pink Tide governments in Latin America, idolized by the reformist Left, were at the forefront of this occupation, with former Brazilian president Lula Da Silva providing more troops than any other country.

Haitians have shown time and again that they are prepared to fight for their sovereignty and economic demands. However, the imperialist powers have also shown their ability to at least temporarily suppress the country’s uprisings. For the movement to succeed, the working class in the imperialist countries must act in solidarity with the people of Haiti. The U.S. working class in particular can support the uprising in Haiti by organizing within the heart of imperialism to support the demands of the Haitian people. Our own fights against inflation and attacks on democratic rights must always include a full rejection of the attacks on our class siblings in subjugated countries like Haiti.