On July 22, Israeli construction crews demolished homes in East Jerusalem, claiming they were too close to the border with the West Bank. Two days later, the Democratic Party-controlled House of Representatives overwhelmingly passed a bipartisan resolution that attempts to lay groundwork for the criminalization of the BDS movement. 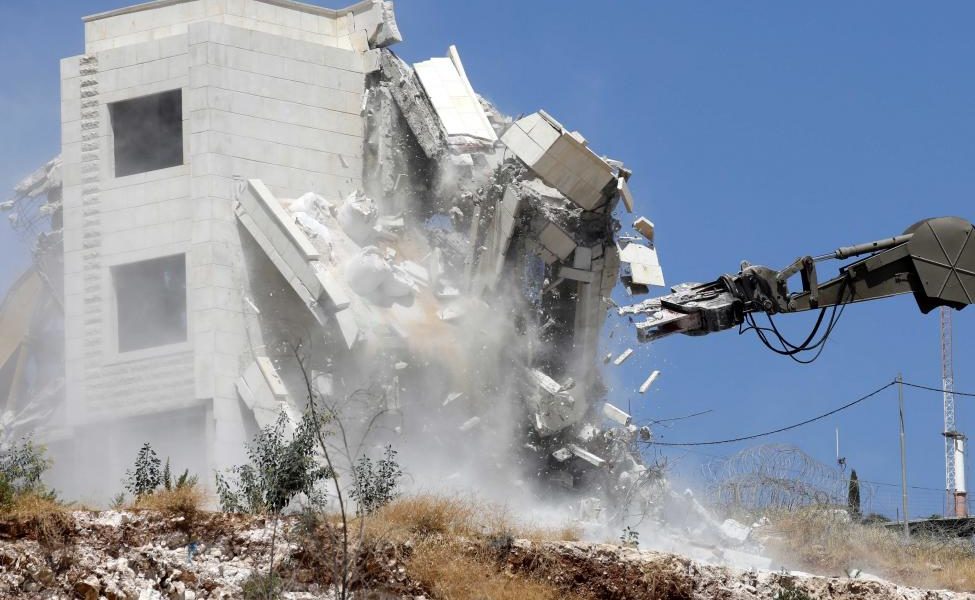 Huge construction equipment tore roofs off of buildings and tore through cement walls during the Israeli demolition of apartment buildings in the Palestinian neighborhood of Sur Bahir in East Jerusalem on July 22. The 11 buildings, containing 70 apartments, were destroyed because of their proximity to the apartheid wall that separates Israel from Palestine. At least 20 people living in the apartment buildings were displaced as a result of the demolition, and hundreds of others who were about to move in lost their homes.

The Associated Press reports that the Israeli Supreme Court decided that the building development “constitutes a severe security threat and can provide cover to suicide bombers and other terrorists hiding among civilian population.” The logic is that, by their very existence, Palestinians—including the residents of the demolished buildings who were forcibly evacuated in the middle of the night by hundreds of Israeli soldiers—are a danger to the Israeli state.

The Israeli army is of course no stranger to engaging in the brutal treatment of Palestinians, nor is the destruction of Palestinians’ homes a new project; Israel’s demolition of Palestinian neighborhoods in East Jerusalem has been going on since the end of the Six-Day War in 1967, supported in the U.S. Congress by Democrats and Republicans alike.

This recent attack on Palestinians’ lives and homes is no different. As the Israeli army demolished Palestinian homes in order to further encroach on lands in the West Bank, the U.S. House of Representatives passed a resolution that would censor criticism of Israel and further endorse its colonization of Palestine.

On July 24, the House of Representatives passed H.Res.246, a resolution that formally opposes the Boycott, Divestment, and Sanctions (BDS) movement. BDS aims to pressure Israel to end its colonial occupation of Palestine and its persecution of Palestinians by ending economic foreign support that enable actions such as the demolition of the buildings in Sur Bahir. The resolution—which condemns the use of the protest method in the U.S.—passed with overwhelming support from both Democrats and Republicans.

Though newcomer Democrats such as Ilhan Omar and Rashida Tlaib have vocally opposed the U.S.’s support of Israel—receiving racist backlash from not only Trump but from Republicans and other Democrats—it should come as no surprise that this resolution was approved in the Democrat-controlled House of Representatives. The Democratic Party may try to paint itself as progressive, but it is actively on the side of Israeli apartheid, funding, maintaining and indiscriminately supporting the state of Israel. The Democrats are quick to discipline any member of the party, like Omar and Tlaib, who even attempt to criticize Israel and the integral part the U.S. plays in Palestine’s oppression.

Introduced by Democratic Representative Bradley Scott Schneider in March, H.Res 246 states that the U.S. government “opposes the BDS Movement targeting Israel, including efforts to target United States companies that are engaged in commercial activities that are legal under United States law, and all efforts to delegitimize the State of Israel.” The bill cites several reasons for its opposition to BDS, among them that the movement “undermines the possibility for a negotiated solution to the Israeli-Palestinian conflict by demanding concessions of one party alone and encouraging the Palestinians to reject negotiations in favor of international pressure” and that it “promotes principles of collective guilt, mass punishment, and group isolation.”

Israeli Prime Minister Benjamin Netanyahu was quick to voice his support for the resolution: “I would like to commend the U.S. House of Representatives for overwhelmingly approving, by a great bipartisan majority, Democrats and Republicans alike, a decision against boycotts against Israel.”

Though the resolution is non-binding at the federal level, it sets a congressional precedent for city and state lawmakers to pass their own legislation and regulations that could criminalize the BDS movement and its supporters. Furthermore, it proves once again that the House of Representatives, and the U.S. government by extension, is united in its support of Israel against Palestinian liberation, even as Israeli military forces destroy Palestinian homes and despite growing support for BDS across the United States.

It was a Democrat who proposed this resolution, and it was the Democrat-controlled House of Representatives that passed it with a vote of 398 to 17. The Democrats and the Republicans are aligned on the issue of support for Israel at the expense of Palestine, but this latest resolution—which wholeheartedly condemns a movement that seeks to weaken the financial foundations of Israel’s occupation—originated with the Democratic Party.

When the resolution came to the floor, no one spoke against it during the debate period, not even Representatives Omar and Tlalib. They did, however, voice their opposition to the resolution outside of Congress. Omar previously introduced H.Res.496 in early July, which affirms the right of Americans to use boycotts (and BDS) and cites the First Amendment, but the resolution has, unsurprisingly, so far failed to gain traction in the House.

Notably, Ayanna Presley broke with the rest of the Squad to vote in favor of the undemocratic resolution, tweeting that she did not think the bill “infringe[s] on 1st amendment rights at the state and federal level,” and that “voting yes on this resolution affirmed to my constituents raised in the Jewish faith Israel’s right to exist, a view I share as a supporter of a two state solution.” Following the Democratic Party line, Presley gave voice to the false logic that equates criticism of Israel’s heinous military and political oppression of Palestine with anti-Semitism. Such conflationary reasoning serves only to give cover to the capitalist parties’ deep financial ties to Israel and obfuscates the true source of anti-Semitism in the U.S.: white nationalism.

The Democratic Party has shown the capacity to appeal to some of the most outspoken progressives in the country, such as the members of the Squad, but this has not changed the fact that the Democrats continue to serve the interests of U.S. capital and imperialism as much as the Republicans do. Both parties advance an imperialist foreign agenda, no matter what the cost to the rest of the world.

By supporting Israel militarily and politically, the United States plays a central role in the continued colonization and subjugation of Palestine and the surrounding region, and in turn, Israel participates in the U.S.’s imperialist agenda. Israel, as a highly militarized U.S. ally in the region, an area on which the U.S. has historically depended for oil, has now deepened its corporate ties to U.S. imperialism. Elbit Systems, an Israeli defense contractor, exports more military and surveillance drones than any other company in the world and is currently assisting the U.S. in its oppression of  Latin American migrants at the southern border. Palestinians have denounced this “broader colonial project” of which Israel has always been a part, linking the fight for Palestinian liberation with the breaking of imperialist chains across the world.

The recent House vote against BDS makes clear the imperialist project of the Democratic Party, as does its continued censuring of Ilhan Omar and other critics of Israel. Insofar as it threatens their financial and political ties with Israel, the Democrats will not even let mild criticisms of Israel stand—they will certainly never allow a real fight for Palestinian liberation.