Thousands of protesters took to the streets of London on Sunday to protest the Conservative Party government’s proposal to keep conversion therapy legal for trans people. 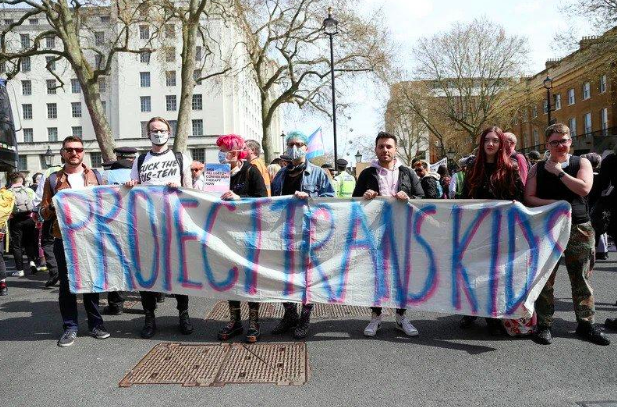 Unsurprisingly, this sparked significant backlash. Even Johnson’s own LGBTQ+ business champion, Iain Anderson, resigned in protest, saying that the government was “trying to drive a wedge” between the queer community. One hundred LGBTQ+ focused organizations and charities pulled out of a government-sponsored conference on LGBTQ+ issues.

But the resistance hasn’t been limited to two-faced politicians and toothless NGOs. It has spread to the street as well. In addition to the protest in London — which may have been the largest protest for trans rights in the UK’s history — a protest was held in Belfast with more than 200 in attendance.

This struggle comes at a particularly precarious time for trans rights, both in the UK and across the world. In the U.S., states across the country are enacting dangerous and repressive laws aimed at banning trans children from playing sports or accessing gender-affirming care — some of these laws go so far as to demand that teachers out trans students to their parents, even if they think it will cause harm, or (in the case of Texas) to actually separate trans kids from their supportive families. Trans women in Ukraine have had an especially difficult time fleeing the country in the current conflict, since doing so requires a passport, which Ukraine has made very difficult to obtain for trans people. And, of course, throughout the world trans people (but specifically women and transfem people) continue to be murdered and disappear at an alarming rate.

In the UK, the so-called transgender question is frequently “debated” in the media with a sizable contingent of trans exclusionary radical feminists (TERFs) claiming a prominent place in the discourse. The British TERFs typically position themselves as defenders of cis women and lesbians but back horrific and anti-queer policies. Conflicts between TERFs and trans people have caused a rise in tensions around the country and in queer spaces with protests and counter protests being held, including at the 2018 London Pride, and sometimes even physical altercations. In the end, TERFs are merely strengthening a Far Right that wants to attack all oppressed people; there is nothing feminist about it.

While TERFs and the Far Right continue their attack on trans people, trans care is decaying in the UK. According to experts, trans mental health care is at a “crisis point.” The wait times for access to gender-affirming care stretch on for years. The Gender Identity Clinic in London, for example, is just starting to offer first appointments to patients who got on the waitlist in December 2017. This is both a result of the systemic transphobia and the decades-long defunding of the National Health Service, overseen by both Labour and Conservative governments. The wait times have gotten so bad that some trans people are leaving the UK to seek care abroad.

There can be no compromises or half measures on ensuring full legal rights of queer people and the full recognition of trans people. Conversion therapy is an abusive, destructive, and repressive process that should never be practiced again, on anyone, for any reason. To protect queer people and to build an actual movement against the repressive and exploitative system we live under, workers and the oppressed must take to the streets, with the protests this past weekend serving as a powerful example, and use their position as workers to fight in their workplaces. This must spread across the UK and across the world. Trans people face historic attacks on our ability to exist, fully and authentically. From Texas to London to Kyiv, the masses must stand with trans people and all the specially oppressed and build a movement that can fight both the specific attacks of the moment and the system that creates them.