On Thursday, January 17th the powerful Tunisian General Labor Union, the UGTT, led a 24-hour strike of public sector workers to coincide with the anniversary of the 2011 uprising known as “The Jasmine Revolution”. 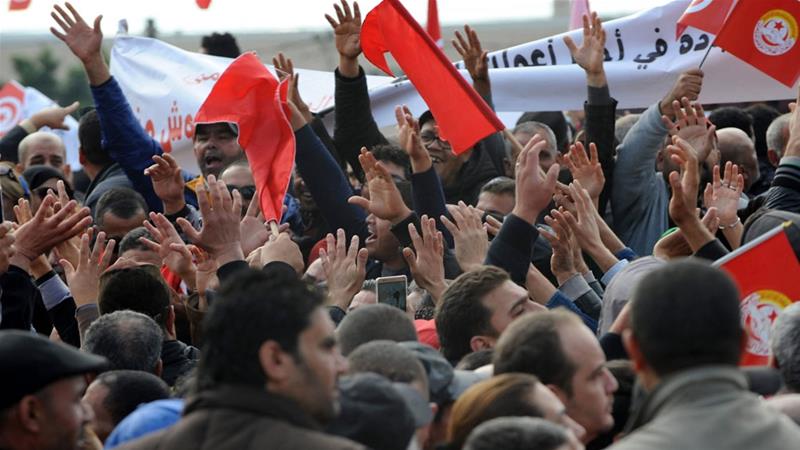 This strike followed an earlier one-day stoppage in November 2018. As the main union federation in the country, the UGTT was a vital force in the Jasmine Revolution and again they are fighting for workers’ justice.

The UGTT is demanding that 673,000 state employees, a sixth of Tunisia’s workforce, receive wage increases that are equitable to those provided in 2018. This increase would equate to 270 dinars more per month, or $91, while the government has offered only a measly 80 dinars or $27 per month.

After nearly 100 negotiation meetings there is no settlement; the government remains intransigent while the workers remain determined to win the wages they deserve. And so the workers turned to one of our strongest weapons, the strike.

The strike derailed business as usual across the whole public-sector on Thursday, creating complete chaos in public education, to transportation, air traffic, government offices, hospitals, ports, state media, and more. While the protest was only 24 hours, the UGTT regrouped the following Saturday to discuss escalation tactics until their demands are met.

The UGTT strike and further escalation are in direct response to austerity measures taken by the Tunisian government at the behest of the International Monetary Fund (IMF). Like many countries throughout the world in need of loans, the Tunisian ruling class turned to the IMF, which then demanded lower public sector wages to balance the budget. Officially, the UGTT is negotiating with the Tunisian government, but having seen the government repeatedly halt talks to consult with the IMF, the UGTT has requested to negotiate directly with the real power behind the government, the IMF.

Since the strategic regrouping January 19th, the UGTT has criticized the Tunisian government for accepting a 2.4-billion-euro loan which will only lead to additional austerity. UGTT has called for more strikes for February 20 and 21, with the same demands.

The “Jasmine Revolution”, also known as the Tunisian Revolution, was ignited when a fruit street vendor – Tarek el-Tayeb Mohamed Bouazizi – immolated himself in protest of the harassment he received from a municipal officer who refused his right to make a living. This act inspired other Tunisians to rise up in anger against the lack of employment and extensive corruption that has been an ongoing issue in Tunisia for decades. The revolution lasted 28 days, and eventually ousted the president of 23 years, President Zine El Abidine Ben Ali, on January 14th, 2011. The “Jasmine Revolution” spread across the region, sparking the Arab Spring.