Thousands of Australians have been displaced by massive flooding. The government’s support for fossil capitalism and militarism must be countered by an internationalist, worker-led climate movement. 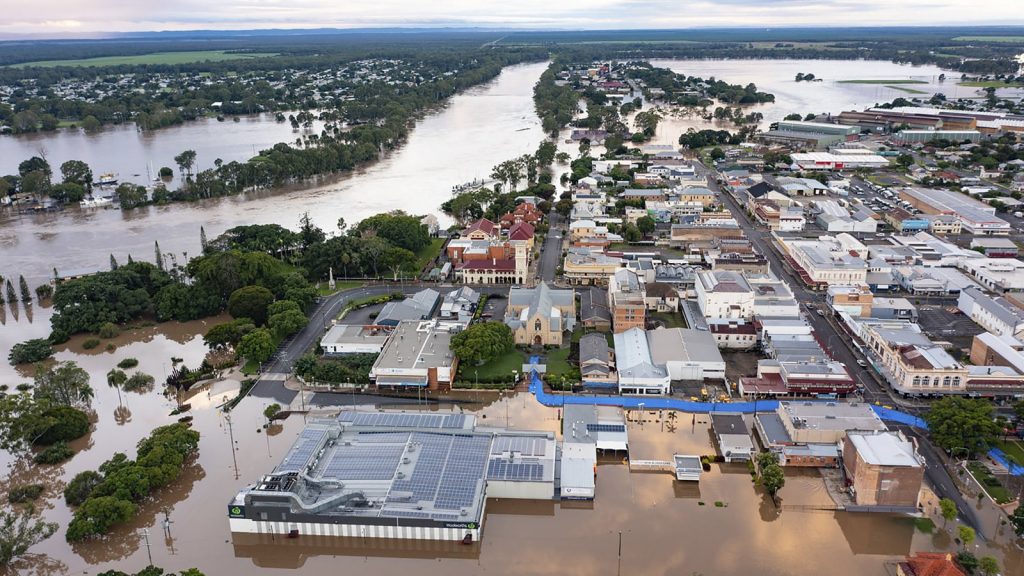 Flooding along Australia’s Eastern Coast has killed at least 20 people and displaced thousands. This is an unprecedented disaster which climate experts are referring to as a “rain bomb,” in which Brisbane experienced 80% of its average annual rainfall over the course of just three days. On March 9, Australian prime minister Scott Morrison declared a state of emergency and announced he would fast-track aid to the most devastated areas. This is too little too late from a leader whose policies are causing greater environmental degradation of the country.

Morrison is an outspoken supporter of coal and stood out as one of the few leaders of wealthy countries at the COP26 climate conference to candidly defend coal extraction, saying that the coal industry will be operating in Australia “for decades to come.” Coal is Australia’s largest energy source and the country is the fifth-largest producer and second-largest exporter of coal in the world. Morrison has continued to defend coal even as the country experiences devastating climate disasters like the recent floods and the deadly bushfires of 2019–2020. He has not only supported the coal industry in rhetoric and policy; he has attacked environmental activists and their basic right to protest.

As is always the case with climate disasters, it is the working class and oppressed communities that face the greatest risk of death and displacement. In terms of the threat to oppressed communities, neighboring island nations are particularly hurt by Morrison’s policies. Neighboring Polynessian, Micronesian, and Melanesian islands are already losing vast amounts of land and essential food sources as these islands sink into the rising Pacific Ocean. This crisis for the island nations, home to many Indigenous communities, is made worse by Morrison’s expansion of Australia’s border regime which subjects climate refugees to long-term imprisonment and deadly deterrence practices.

The same week that Australians were being displaced by flooding along the East Coast, the Wall Street Journal reported that the Australian government has plans to further militarize the East Coast by constructing a naval base that could help maintain American nuclear submarines. This itself is an attack on the environment and working-class communities as it takes resources away from climate-resilient infrastructure projects and puts those resources toward bases and military vessels which destroy marine life and further fuel the climate crisis. Morrison recently announced his plan to spend $38 billion on Australia’s military and increase Australia’s number of troops by nearly a third.

While Australia is pursuing its own imperialist ambitions to control the Pacific, these ambitions align neatly with U.S. imperialism’s increasing militarization of the Pacific. As a result, Australia is destroying the environment by expanding its own military and aiding the U.S. military which is one of the largest carbon emitters on the planet. As the United States and Australia place greater emphasis on competing with China for control of the Pacific, escalations of conflict pose an existential threat to working-class and Indigenous communities who face the greatest consequences of military conflict between major powers. After all, these communities are already dying from the escalating power struggle.

Morrison’s support for extractivism and militarism makes clear the need for a climate movement led by the international working-class and oppressed communities that places emphasis on anti-imperialism.