Just weeks before last Christmas, a Maritime Union of Australia (MUA) delegate was sacked from the Victoria International Container Terminal (VICT) facility in the Port of Melbourne. Unionists and community members responded with a nineteen day around the clock picket that stopped all container movements in and out of the VICT terminal. Now unions are being sued by the company for up to AU$100 million (US$75-80 million). 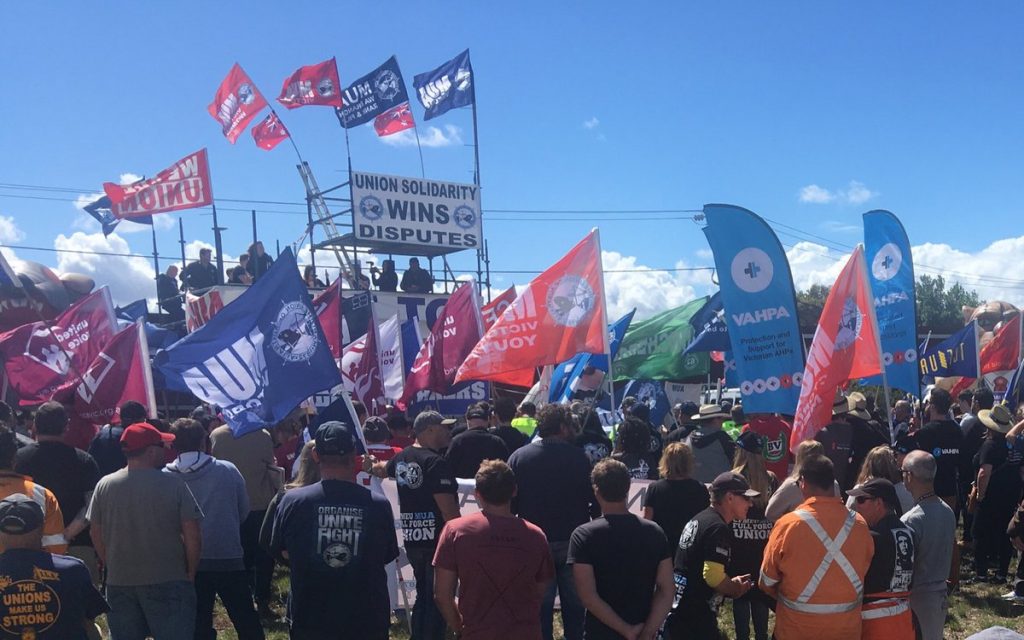 The Maritime Union of Australia (MUA) and the Construction, Forestry, Mining and Energy Union (CFMEU) are being sued by Victoria International Container Terminal (VICT) for their alleged role in a nineteen day long “community assembly” that blockaded the Port of Melbourne facility late last year. In a claim submitted to the Supreme Court of Victoria on January 17, VICT are seeking damages from these unions of over AU$8 million (US$6-6.5 million) in physical damages and up to AU$100 million (US$75-80 million) for damage to the company’s reputation and loss of future earnings. This is one of the largest (if not the largest) damages claim ever lodged against the union movement in Australia.

The blockade of the VICT terminal began on November 27 after MUA delegate Richard Lunt was sacked by VICT. An initial picket set up by MUA members outside the terminal gates was soon replaced by a broader “community assembly” involving other unionists and members of the local community.

Richard Lunt was sacked after an audit by VICT management found that 22 dockworkers (“wharfies”) did not have a government mandated Maritime Security Industry Card (MSIC). While the other 21 dockworkers were allowed to continue working, Richard Lunt was not. Richard was targeted for being the senior MUA delegate on site, for leading an MUA recruitment drive at the new VICT terminal, and for taking VICT to the Fair Work Commission (FWC) industrial relations tribunal for bullying and intimidation.

VICT management falsely claimed that Richard was ineligible to hold an MSIC card and terminated his employment. Richard has in fact worked on the docks for years and repeatedly held MSIC cards. He does have an assault conviction that is over 20 years old, which with the necessary police checks regularly delays the issuing of his MSIC card. Richard was finally issued with a new MSIC card on December 8.

Richard Lunt, described by at least one news outlet as a “serial agitator”, was also one of the “Qube Two” sacked by Qube Logistics in 2013 after a safety dispute. A brief description of this dispute can be found here.

It was not long before the community assembly that began on November 27 was deemed illegal. Within days VICT had won orders from the Supreme Court of Victoria to try and shut down the protests. The first orders dated December 1 barred any MUA or CFMEU member from either being within 100 meters of the VICT terminal and / or hindering the entry and exit of any persons from VICT for seven days. These orders were further extended on December 12, and then also served on other “representatives” of the community assembly such as Victorian Trades Hall Council (VTHC) Secretary Luke Hilakari. This is the first time that a leader of a regional union council such as Trades Hall has ever been targeted in this fashion.

Despite the court orders, the now illegal community assembly held its ground. It was further strengthened on December 8 when dockers from neighboring terminals such as Patrick and DP World took illegal industrial action and walked off the job, bringing Melbourne’s waterfront to a virtual standstill. Between 2000 and 3000 people joined these striking workers at Webb Dock for a solidarity rally. Those assembled heard speeches from MUA National President Christy Cain, MUA Deputy National Secretary Will Tracey, Australian Council of Trade Unions (ACTU) Secretary Sally McManus, VTHC Secretary Luke Hilakari and Victorian CFMEU leader John Setka who told the rally that “everything we have here today is by breaking the law and taking industrial action”.

After almost three weeks of protesting, a settlement was finally reached on December 15. VICT agreed to put Richard back on its books as an employee and continue to pay him a minimum salary. But he will not be able to return to work at VICT until a decision is reached in a court case set for later this year. While far from a complete victory, the fight that was put up make VICT think twice before acting so brazenly in the future.

Anti-union to the core

VICT’s attempts to sack an MUA delegate are not only part of the company’s conscious policy of trying to keep the MUA out of the VICT terminal, but fit hand in glove with the anti-union tactics that VICT’s parent company, the International Container Terminal Services Incorporated (ICTSI) group, has demonstrated around the world.

Commencing operations in early 2017, the VICT terminal is Australia’s first fully automated container terminal. VICT management used this automation as a pretext to lock the MUA out of negotiations. Despite all stevedoring work in Australia being traditionally covered by the MUA, VICT signed a new agreement in 2016 with the Australian Maritime Officers Union (AMOU), the union that covers stevedoring supervisors and ship’s captains. One of the masterminds behind this plan was none other than former MUA official Mick O’Leary.

O’Leary was an MUA official for nearly twenty years, and the MUA Deputy National Secretary during the 1998 Patrick lockout. Not long after this dispute finished, he resigned from the MUA and began working for stevedoring employers, including Patrick Stevedores. He is now the Human Resources and Industrial Relations Director at VICT.

The VICT agreement signed by O’Leary and the AMOU undermines long-held waterfront conditions. For just one example, wages at VICT are around 30 to 40 percent lower than the industry standard. Management are also attacking working conditions on site, with dockers at VICT being forced to work without meal breaks and extended hours (with some shifts running up to 19 hours), while those who stand up for conditions outlined in the agreement are bullied and victimized.

Just like VICT, the Philippines-based ICTSI has a history of anti-unionism. In Madagascar, 43 dockworkers were sacked from the ICTSI terminal there in 2012 for joining a union, while docker unionists working for ICTSI in Indonesia are openly discriminated against for more visit [Justice for Dock Workers]. In Honduras, ICTSI control of a newly privatized port in 2013 soon saw dock union leaders facing death threats and assassination attempts.

A nineteen day non-stop community assembly and the solidarity strike on December 8 – both of which were technically illegal – have left VICT with a bloody nose. But unions have not walked away from this fight unscathed. The MUA and CFMEU are facing a damages claim of over AU$100 million. Given that an Australian Financial Review article recently complained about how the planned merger of the CFMEU and the MUA would create a “$150m super union ‘too big’ for the courts” to rein in, the AU$100 million figure is clearly designed to cripple (if not bankrupt) these unions.

This damages claim is part of a turn by employers to the legal system to try and break effective unionism. The MUA currently faces an AU$10 million damages claim brought against it by multinational energy giant Chevron, while the CFMEU has already handed over millions after prominent construction industry disputes, including AU$3.5 million to Grocon and AU$9 million to Boral in 2015.

These figures far outstrip the AU$8 million total (in today’s dollars) for the hundreds of fines levied between 1956 and 1969 against unions under so-called “penal powers”. Yet when Tramways Union leader Clarrie O’Shea was jailed for refusing to pay his union’s fines in 1969, the strike wave of over one million workers that swept across Australia soon freed O’Shea from jail and made sure that these “penal powers” were never used again.

Effective unions cannot continue indefinitely while the threat of being financially crippled and bankrupted hangs over their heads. As the ACTU correctly reminds us, “the rules are broken”. The peak union body has launched a “Change the Rules” campaign that targets the current industrial relations system. But if past experience is any indication, this campaign will become just another excursion into electoral politics, with the focus on campaigning in marginal electorates to ensure the victory of a Labor Party government – a government that historically has never repealed all the draconian anti-union laws that unions want abolished.

If the union movement is ever going to turn the situation around, it needs to do two things. One, declare that unions will no longer pay these fines and damages claims, and that any move to forcibly collect these costs will be met with industrial action. Two, launch a mass campaign of industrial action that demands the repeal of all anti-union laws. In order for effective unionism to survive, what is needed is a lot less marginal seat campaigning and a lot more 1969.