The authorities who beat up the youth are contemptible and weak

Here, Left Voice reproduces an appeal by a collective of more than three hundred activists, artists, and academics in France, denouncing police violence and authorities’ abuses since the onset of the state of emergency. 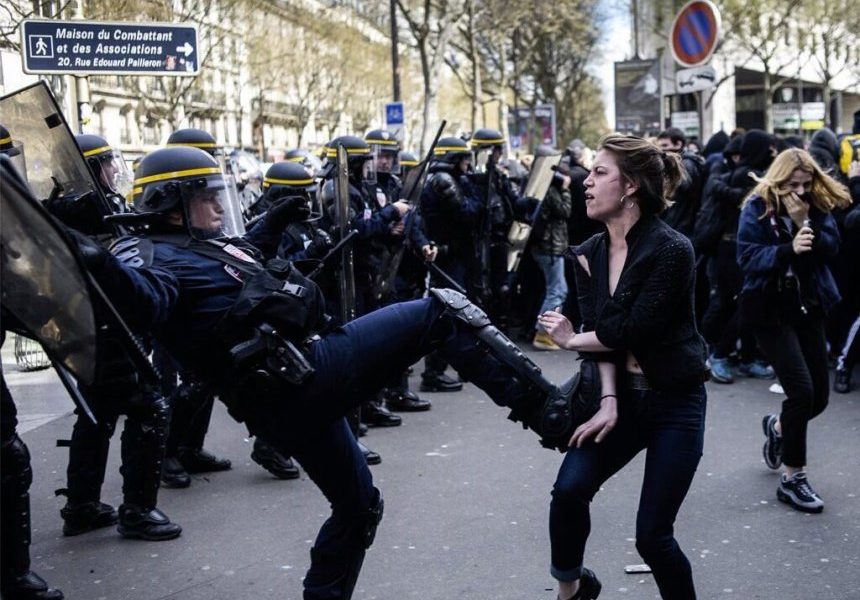 Since last November and the proclamation of the state of emergency, the decomposition of the social-regression and police-truncheon state has massively accelerated. This state has dropped any inhibitions about its submission to capital — a capital that stamps its feet, impatient to be able to exploit and cast aside whomever it likes, whenever and however it pleases. Those who refuse to roll over — fighting for their dignity, their future, or simply their everyday lives — are being brought in ever-greater numbers before tribunals, treated as terrorists and, like the Goodyear workers, sentenced to prison terms. Developing in tandem with this has been the most methodical police violence.

The youth of the high schools and universities have been paying for this for several weeks, undergoing a truly indefensible level of repression. The three hundred and more arrests at the 29 November Place de la République protest against the COP21 [UN Climate Change Conference] were, indeed, a foretaste. Since 17 March and the violent expulsion of a group of students from Tolbiac faculty, each day of youth mobilisation has occasioned a crescendo of gas attacks, arrests, and beatings at the hands of the police. What shameful hypocrisy it was for [Interior Minister] Bernard Cazeneuve to claim to be ‘shocked’ by the violence with which a fifteen-year-old from Paris’s Lycée Bergson was beaten up by three police, armed to the hilt, on 24 March.

Again on 5 April, over 130 high-schoolers, gassed and beaten by the CRS [riot cops] and plain-clothed police, were arrested even before they arrived at the demonstration planned for the Place de la Bastille that afternoon. And on 14 April the number of helmets, truncheons, gas canisters and shields designed to shut down the in fact peaceful march in Paris was so vast — a drone covering the entire area — that passers-by wondered if this was… a police demonstration. Such measures were not only used in Paris; Nantes, Rennes, Lyon, Montpellier, Rouen, Caen, Grenoble, Toulouse etc. suffered much the same. And so too, of course, the striking workers of Mayotte [a French island in the Indian Ocean].

How many split skulls and other serious injuries, hospitalisations and stitches, Flash-Ball shots, insults, threats, arrests (even directly outside the schools themselves) custodial measures and trials will it take before we stop tolerating this? How many more cases like Malik Oussekine [who died in police custody after his arrest on a 1986 student protest] or Rémi Fraisse [an environmentalist killed by a Flash-Ball grenade at a 2014 demo], will the authorities allow themselves? How many more cases like Amine Bentounsi [shot dead by a policeman in 2012], or Zyed Benna and Bouna Traoré [two young men electrocuted as they were chased by police in 2005, leading to that year’s banlieue uprising], and how many more daily acts of police violence in working-class neighbourhoods are there to come, if we do not put an end to this sinister, disgraceful machinery?

Such violence is a fine expression of the infinite disdain toward these same young people whom François Hollande had earlier claimed to be putting at the heart of his presidential agenda. These authorities who beat up the youth are as weak and frightened as they are contemptible. They tremble faced with a youth whose radicalism cannot be controlled. They know that these young people’s anger and solidarity are growing, in the face of those who offer only despair, poverty, and regression. The authorities have not forgotten the decisive influence that the youth can have on workers as a whole. The incredibly violent way in which the CRS “welcomed” the students who came to meet the railworkers at Saint Lazare station on Tuesday 12 April, arbitrarily arresting one of them, speaks volumes about how haunted they are by any prospect of students and wage-earners joining together.

If some politicians — including in Socialist Party ranks — want to go as far as breaking up Nuit Debout!, the government is trying to take advantage of the atmosphere maintained by the both complete and complicit mass-media blackout. It thus drops a few crumbs, at the same time as tolerating a few business-as-usual days of action which in themselves exert little pressure. In any case, such routinist days of action achieve a lot less than these determined youth, which the government wants to break by force in the run-up to the school holidays.

To leave the truncheon beatings unpunished is itself to take on an immense responsibility. The condemnation of this recurrent violence must be uncompromising; and we are still far short of what it is necessary to do on a national scale. So far the stances taken on a local basis — where this has been done — by parties, unions, and various kinds of associations, or even within professional bodies like those for teachers or academics, remain largely insufficient for breaking through the omertà. Nothing needs relativising or qualifying, here. It is high time that we put a stop to things that have no possible justification — beyond, that is, the arbitrary power of the princes of the police state and the CAC40 [the leading Paris stock market index]. It is high time that we join together to put a stop to this, acting together with the students, high-schoolers, and workers who are today fighting not just an iniquitous bill, but — ever-more so — for a life that is not mere survival.

To see the full list of signatories and/or to support this appeal, see http://stoprepression.unblog.fr/

This statement was published in English on VersoBooks, April 18, 2016.