The United Auto Workers (UAW) stopped work for eight minutes and forty six seconds on Friday to honor George Floyd. This work stoppage represents the first intervention by the UAW in the current movement. 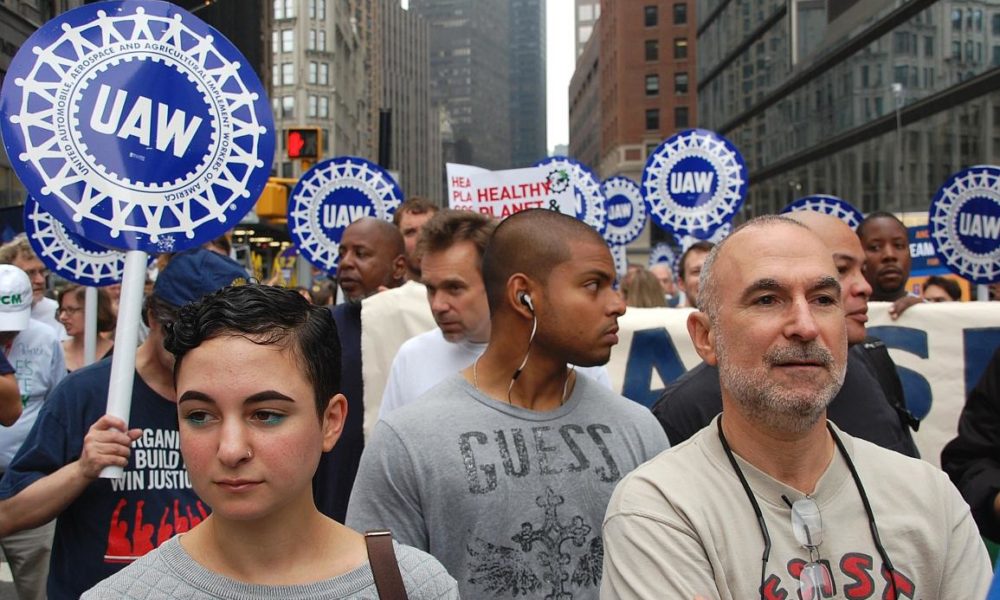 Friday June 19 marked an important moment in the ongoing uprisings against police violence for two reasons. Juneteenth brought massive crowds into the street to protest not just the police murrder of George Floyd but also the murders of countless other Black people at the hands of the state, both recently and historically. But Friday also signified a massive increase in the involvement of organized labor in the protests. The biggest example of this was the work stoppage staged by dockworkers all along the West Coast, who shut down 29 ports and ground operations to a halt. However, other unions also organized actions, like the UAW, which participated in a nearly nine-minute long work stoppage.

The UAW called on their workers across the country to stop work for eight minutes and forty six seconds, the amount of time that Minneapolis Police Officer Derek Chauvin’s knee was on George Floyd’s neck. This work stoppage represents the first time that the UAW has intervened in the current movement. Work stoppages like this one are important first steps to combining the strategic power of labor with the protests on the streets. Even short work stoppages can cost the bosses huge amounts of money. As an example, the dock workers’ day of action on Friday that closed West Coast ports cost the bosses billions of dollars. Halting production through work stoppages, protests, and strikes hit the ruling class where it hurts: their bank accounts.

As the sixth largest labor union in the United States, the UAW is able to exert a massive amount of pressure on bosses. Too often, however, union leaderships refuse to fight. As recently as last year, the UAW rank-and-file were sold out by their leadership during their strike, as the union leaders — who pull in high salaries and aren’t subjected to the same working conditions of the rank-and-file — compromised on the demands of the workers, prematurely ending the strike. Even now, the leadership of the AFL-CIO, the labor federation of which the UAW is a member, refuses to kick police unions out of their ranks.

To combat this, rank and file members of the UAW and every other AFL-CIO affiliated union must demand that police unions be expelled and not allow their leaders to quibble or drag their feet. Police have no business in the labor movement and their unions must be disaffiliated. In addition, union members must demand that their unions escalate their involvement in the protests through solidarity strikes. The strategic fighting force of labor must be joined with the demonstrations on the streets.