Bates College Employees Made Labor History, and Admin Is Coming Out Swinging

Bates College, a liberal arts school in Lewiston, Maine, became the first private college in the United States to file for a wall-to-wall union. Despite their talking points of “social responsibility” and “the world beyond one’s self,” the bosses are fighting back tooth and nail, with censorship and illegal labor practices. 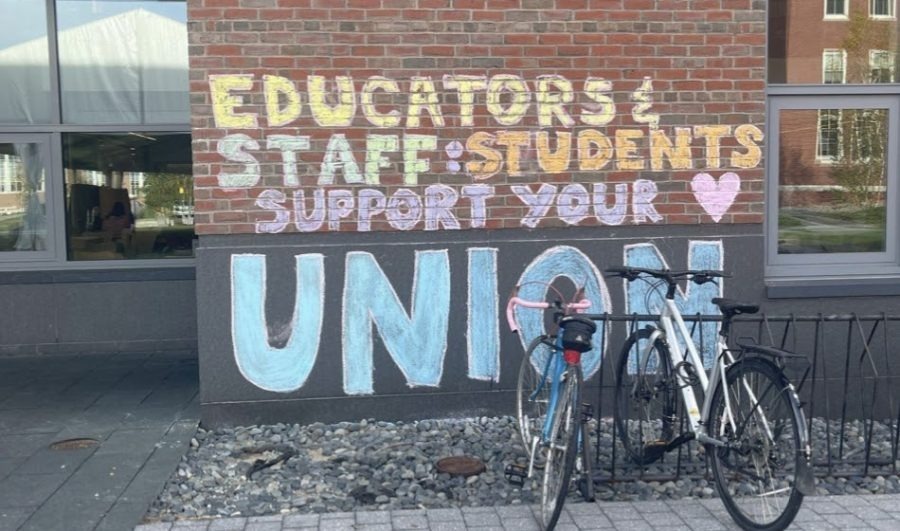 In response to low pay, high turnover, and poor conditions, staff and adjunct faculty at Bates College in Lewiston, Maine filed in early October with the National Labor Relations Board. About 650 employees are eligible to join, and organizers are working with MSEA-SEIU Local 1989. The proposed historic new union, called the Bates Educators & Staff Organization (BESO), would be wall-to-wall, including any and all staff who aren’t campus safety officers, tenured or tenure-track faculty, or management.

“Over the past year, too many of our coworkers have left due to dissatisfaction, low pay, and poor working conditions at the College,” reads the mission statement put out by BESO. “Losing so much talent and expertise has added more work for those of us who remain, diminishing our capacity to provide quality learning and living conditions for our students. By forming our union, we establish a means to improve these conditions and therefore protect the Bates we all know and love.”

Just one example of how these working conditions have affected the tiny campus can be found in the cancellation of the senior thesis for this year’s graduating students in economics, one of the top five majors at the college. Two professors wrote that this change had to be made “given the magnitude” of faculty losses. The professors wrote that “this change is especially painful” becauseBates is one of the only colleges in the United States that requires a thesis for graduation. Many students attend with this opportunity top of mind. Losing that is a low blow, and a sign of serious underlying issues. Despite clear signs of the need for serious changes, like having to cut a renowned and respected academic requirement, the Bates administration has been firmly against unionization, meeting with an anti-union law firm and even illegally threatening employees’ benefits.

The Bates Student confirmed that there are at least 20 members of the faculty and staff who have left the college in the past 12 months, some of whom were employees for 15+ years. The Student reported that the departed staff “named similar themes of lack of funding and support, including a growing concern about what many called a ‘scarcity mindset’ at Bates.” Essentially, the college says they don’t have enough resources. Former assistant professor of American Studies Dr. Kristen Barnett stated,“I showed up at Bates and they were like ‘we’re poor’…but you know we’re only poor when we compare our endowment to that of peer institutions,” continuing, “Bates has a plethora of resources… how they choose to spend them or if they choose to use them is another thing. I think we’re lying to ourselves, to our students, to everybody, when we say we’re poor or we can’t afford to do that.” Bates College’s endowment is currently 341.6 million dollars.

Throughout October, anti-union intimidation and surveillance tactics by the administration have severely worsened. A dramatic example came on October 14, in an act of censorship by the Bates administration against the student newspaper. An administrator privately pressured a student reporter to delete and rewrite an article featuring numerous perspectives that a number of Bates employees shared with The Bates Student about their efforts to collectively form a union. It was rewritten with an additional 1,000 words to feature anti-union talking points. Additionally, one worker opposed to the union––along with Mary Pols, the Media Relations Specialist at the Bates Communications Office, who oversees the newspaper––were interviewed and quoted in the article. A document highlighting all of the text added and removed from the original article, under pressure and direction from Pols, is available online.

“Just like they are intimidating workers from exercising our right to unionize, now they’re violating student reporters’ editorial independence and the basic principles of press freedom. They’ve crossed the line here, getting too carried away in using their power, so we need to ask this institution to live up to its ideals,” said Jon Michael Foley, Grounds and Maintenance Worker and member of the BESO worker Organizing Committee.

On October 19, Bates employees of the Bates Educators & Staff Organization filed Unfair Labor Practice (ULP) charges with the National Labor Review Board (NLRB) against Bates College. The board charges are based on evidence that the Bates administration illegally threatened employees with adverse consequences, such as the loss of benefits and termination, and that they maintained and enforced a discriminatory no-solicitation rule to prevent employees from exercising their legal right to unionize. Threatening adverse consequences such as discipline, termination, or loss of benefits for union activity, whether the union activity occurred during or off work-time, is illegal under Section 7 & 8(a)(3) and (1) of the National Labor Relations Act. Over the coming weeks, the NLRB will launch an investigation into the charges.

“All we’ve ever wanted was the space to have open and honest conversations with our colleagues about the things we love about Bates and the things we want to see changed. These violations of our rights make it really hard to do this, and run contrary to the Bates administration’s commitment last week to ‘free inquiry and open discourse‘ during our effort. We’ve had some really amazing conversations all across campus since this began, and are building relationships across departments that make the College a stronger and more welcoming place. But this requires a work environment free from misinformation and intimidation,” said Olivia Orr, ‭Web Designer at Bates and BESO organizer.

Eyes will be on the college moving forward, as with all sectors of the labor movement during #Striketober. Here’s hoping the national coverage of this censorship, arguably a coverup for the illegal misinformation and surveillance by the college now filed with the NLRB, puts pressure on the administration to remain neutral as BESO heads towards a vote in the coming months. Alumni, community members, and the public have come together to support the Bates Educators and Staff Organization and to receive updates on both Instagram and Facebook, where readers can also follow their struggle.