The Bath Iron Works strike that started on June 22 now enters its fifth week. Workers from other unions have joined them, and strikers have adopted Black Lives Matter slogans as well. Read this report from Socialist Resurgence on the rally. 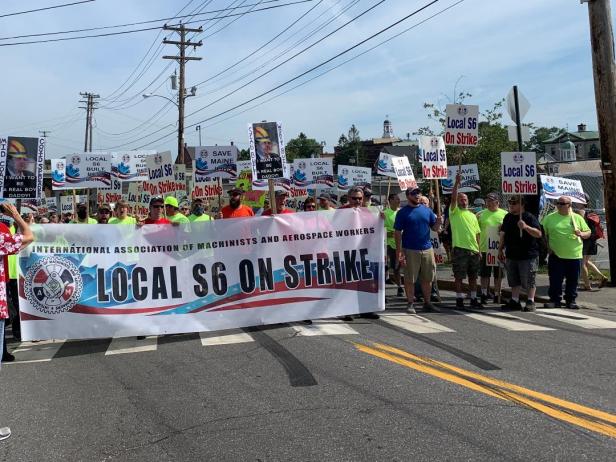 On July 25, Socialist Resurgence members attended a 300-person rally in Bath, Maine, at the International Association of Machinists Local S6 union hall across from Bath Iron Works. BIW is owned by General Dynamics, the country’s fifth largest defense contractor, which has a long history of union-busting activities.

There were a few speakers from the IAM at the rally, most notably, Brian Bryant, a former pipefitter and now an international union vice president. Bryant’s roots go back to the United Paperworkers Union, where his father was a member in one of Maine’s paper mills. He spoke about being on the wrong or right side of history: “If you can’t get behind this strike, you are on the wrong side.”

Bryant also spoke about the working class and scabs. He distinguished the word “scab” from “super-scab.” A scab, he said, is someone off the street who decides to work and crosses a picket line. A super-scab is someone who is a Local S6 worker, enjoys the wages and benefits that the union has negotiated, but decides s/he will cross the line instead of striking in solidarity.

The IAM president, Bob Martinez, was less inspiring, in our opinion. He spoke about mediation, stating that the company needs to get back to the table, and that the union has “reasonable solutions.” He also stated that the union contract already has subcontracting language in it, which can be interpreted to indicate that they are willing to give in on the subcontracting issue in order to get a mediated settlement.

Most of Martinez’s rhetoric was related to begging politicians for support. He said that he had contacted Senator Susan Collins (R), one of Maine’s senators, who has been known as a swing vote in Washington, D.C. Collins has stated that she won’t “get involved with the strike.” Her Democratic Party opponent for the U.S. Senate, Maine’s Speaker of the House Sara Gideon, did speak and has been present at the picket line. Martinez said he had even contacted President Trump about the strike. (No response, not even a tweet out of Trump).

The Bath Iron Works strike started on June 22, after 87 percent of the workers voted to reject the company’s contract offer. It is the largest strike in the country at this moment, including some 4300 workers. Workers from other unions have joined the strikers on the picket lines. Strikers at the July 25 rally adapted slogans from the Black Lives Matter movement, such as “No Justice, No Peace!”

While the enthusiasm of the strikers remains high, however, the strategy of striking to mediate or begging politicians to “get involved” are really poor ways to win a strike. The union has made little attempt to stop the scabs from going into the yard and has discouraged any type of confrontation with scabs.

Workers are getting other jobs to cover themselves financially during the strike. Their health insurance has been cancelled, in the middle of a pandemic! Without a different strategy, it will be business as usual for the workers in Local S6. Without a militant groundswell from the rank and file, these shipbuilders are liable to be out of work for a really long time.

This article was originally published on July 26 on Socialist Resurgence.