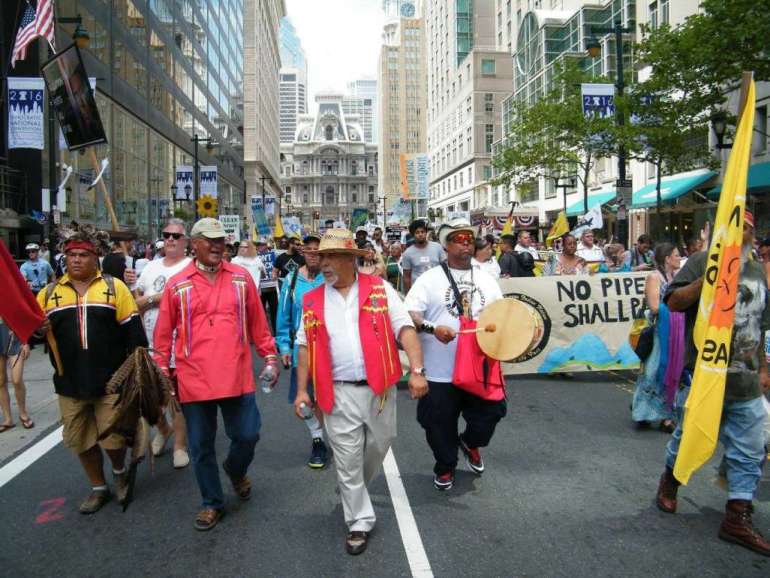 Volunteers began gathering early in the morning to review routes and emergency response—the heat being one of the main concerns, with temperatures creeping well into the mid-90s. The mass turnout cannot be attributed to the efforts of the largely pro-Democrat NGOs that called for the march. The thousands present in spite of the non-profits’ paltry mobilization efforts is indicative of the depth and breadth of popular concern over the environment and climate change.

The climate crisis is a threat to life on Earth. It is a problem that cannot be solved under capitalism. The system’s pursuit of profit at any cost ensures the continued downward spiral of the environment and future life on the planet. The working class is the only social force that can solve this problem by leading the way to revolutionize the system of production and social relations underpinning this crisis. Otherwise, the capitalist and corporatist solutions and agreements will only continue to be hoisted onto the backs of the poorest on the planet.

Encircling City Hall were community organizations, union delegations, and caravans from throughout the country. Some came directly from protests at the Cleveland RNC. The “Up to Us” caravan left Los Angeles seven days ago to arrive in Philadelphia just in time for Sunday’s actions. A nurse from Los Angeles flew in the night before to join a delegation of the National Nurses United (NNU), making their presence known with posters saying “Ban Fracking” and boisterous red t-shirts. Across the street from City Hall, the SEIU raised a banner that read, “Respect Black Workers”—held up by Philadelphia airport workers last week when they went on strike in support of the Black Livers Matter movement. The Penn Federation Brotherhood of Maintenance of Way Employees (BMWE-IBT) also marched alongside other union contingents. Protesters held banners representing a spectrum of demands concerning clean energy and environmental justice: “100% Renewable Energy,” “Keep Fossil Fuels in the Ground,” and “No Pipelines in My Community.”

Interspersed throughout the Clean Energy March were groups and individuals that were Bernie Sanders supporters. A young woman with the “Journey for Bernie” caravan was picked up from her home state Arizona. She said she would not vote for Clinton in November. When asked why she thinks Bernie decided to endorse Clinton, she said with a whimsical half-smile, “I think it’s a strategy. He’s got other plans.” Inside the Wells Fargo Center today, Sanders is scheduled to speak soon after the Democratic Party “gavels in” the convention.

Outside, numerous protests and events will take place, organized by those who support and long for Bernie’s continuation in the race, as well as those who call for a political alternative “beyond Bernie.” By the end of this week, 5,000 delegates will ordain the official Democratic Party presidential nominee, and the next presumptive President of the United States.

Whatever “inner strategy” Sanders’ supporters think he is pursuing, the fact remains that he continues to play the sheepdog role for the Democrats. Speaking on NBC’s Meet the Press, he stressed the necessity to defeat Trump, who he described “the worst candidate for president I have seen in my lifetime.” In spite of the recent DNC email leak, the resignation of DNC Chair Wasserman Schultz, and widespread criticism of vice presidential prospect Tim Kaine, Sanders pledged his loyalty to Clinton and vowed to put all his energy into securing her election.