Before the Yellow Vests, Chile, and Lebanon, There Was the Uprising in Haiti

Haiti has been fighting back against austerity and government corruption since last year. But the problems that Haiti faces are deeply rooted in a colonial legacy and imperialist intervention. 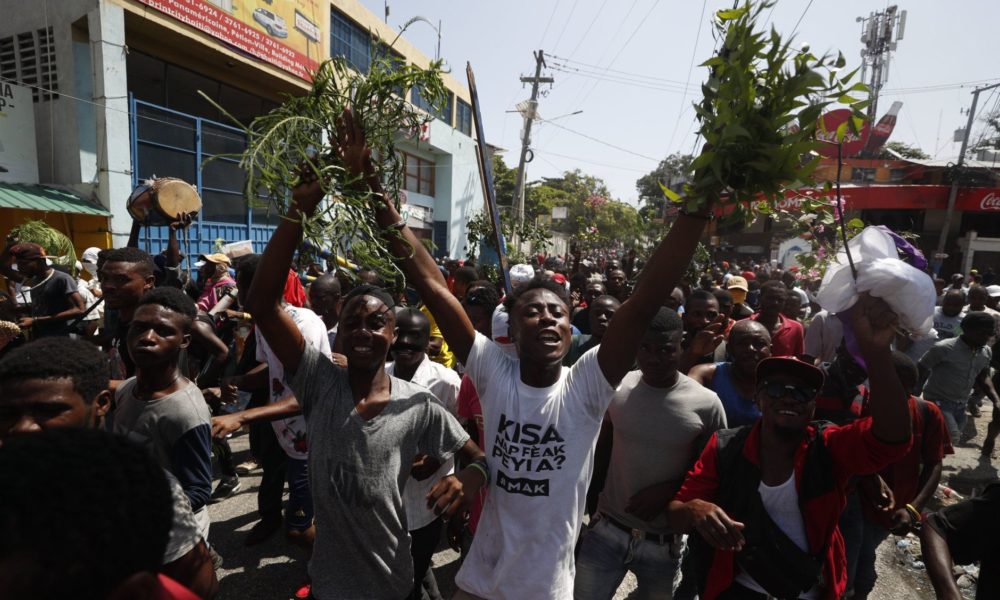 It is undeniable that a wave of mass protests is sweeping the world. As we speak, hundreds of thousands of youth and workers are rising up in Chile, Lebanon, Algeria, Iraq and Haiti. Indigenous workers are fighting the coup in Bolivia as well.

Perhaps the most famous protests were those of the Yellow Vests movement, in which hundreds of thousands of French people wearing yellow vests protested fuel price hikes and eventually called for the ousting of the president.

But before Chile, Lebanon, Iraq, Algeria, Ecuador, Puerto Rico and France, there were mass uprisings in Haiti—often underreported, but just as combative as these other uprisings.

The uprisings in Haiti began in July 2018, when the IMF demanded cuts to government subsidies on gas in exchange for almost $100 million of loan repayment. Gas prices rose to $5 a liter, while the majority of the population survives on $2.41 a day.

The demand of the most recent wave of protests is an end to fuel shortages, but as in previous mobilizations, protesters are including a clear call for the resignation of President Jovenal Moïse, as well as his cabinet. They demand punishment for the corrupt politicians who have stolen millions from the Haitian people, leaving them in continued misery — pointing in particular to funds from Venezuela that magically disappeared. And, lastly, they demand an end to IMF intervention, an end to austerity and a plan to deal with the Haitian economic crisis.

Since the start of the protests in 2018, the Haitian government has combined repression with minimal concessions. Two prime ministers have stepped down, and Moïse has rescinded the price hikes. But nothing can get people out of the streets.

The protests have been violently repressed, with over 42 people killed since mid-September, including at least one journalist. The images are brutal: the police running over protesters and shooting at them, prompting the United Nations to call for an investigation. Thousands of people fighting back. People building barricades in the street and throwing rocks. “We’re going to break and destroy everything [if Moïse doesn’t resign],” said Reynald Brutus, a 28-year-old unemployed protester.

It is no wonder that Haiti was at the forefront of this global wave of protests: The poorest country in the Americas has suffered from a colonial legacy of debt from imperialist nations, climate change disaster and continued foreign intervention to repress the working class.

Haiti is the first and only country where enslaved Black people rose up against both their masters and their colonizers, defeating them and establishing an independent nation. Despite the military superiority of the French colonizers, British intervention and the brutal repression of the slave masters, enslaved Haitians organized and fought for freedom. In 1793, they abolished slavery, and in 1804 they gained independence from France. As a result, a government emerged that was free of slavery and run by former slaves.

This sent shock waves across the world. It meant a tightening of control over enslaved people in the United States and across the Americas.

In exchange for recognizing Haiti’s independence, France demanded compensation: 150 million francs — which is $21 billion today. They also demanded a 50% discount on all Haitian exports. With interest accumulating, this “debt” was not paid off for over 100 years. This debt was a key element in the underdevelopment of Haiti, crippling the small island from the start.

Haiti overthrew its slave masters and imperialist nations have been punishing it ever since.

Later, despite initial tensions, the United States and other colonial countries propped up the repressive “Papa Doc” regime of François Duvalier, providing massive loans to Haiti. This only increased after the Cuban Revolution, when Haiti was seen as an anti-communist bastion in the region. Although Duvalier’s corruption was well known, imperialist powers continued to provide massive loans to Haiti, much of which Duvalier pocketed. In short, Haiti has always been subservient to loans accrued because of colonialism and imperialism.

For their part, U.S. imperialists have attempted to find a stable puppet government in Haiti to protect their investments and the corporations that hyper-exploit Haiti’s resources. In Papa Doc and his son, Baby Doc, that stability came at the price of hundreds of thousands of Haitian lives, killed in brutal repression. At the same time, both these regimes implemented neoliberal measures, opening the country to foreign investments and hyper-exploiting Haitian workers for the benefit of foreign corporations.

But capitalist “stability” has been impossible to find in Haiti because of the level of poverty and the combativeness of a country born from the struggle against slavery. Throughout the 1990s and early 2000s, Jean-Bertrand Aristide was vying for power in Haiti. Though he enjoyed widespread popular support, a progressive priest who followed the ideas of liberation theology was not at all agreeable to the United States. Aristide demanded reparations for the money that France extorted from Haiti after its independence and demanded the expansion of democratic measures that had been limited under the Duvalier regime.

After Aristide won the presidency in 1990, the U.S. consistently intervened to keep him from power. Far from being concerned with democracy in Haiti, the United States and other imperialist powers meddled in Haiti’s affairs in order to ensure the continued payment of the foreign debt. It organized two coups. The first was in 1994 under Bill Clinton’s “Operation Uphold Democracy.” But after massive mobilizations in Haiti and international pressure, Clinton returned Aristide to Haiti to complete his term — with the agreement that he would implement neoliberal measures.

After losing an election and then later getting elected again in 2001, Aristide and his administration were rocked by corruption scandals, losing some of their base of support. This corruption, like his support for neoliberal measures, demonstrates that Aristide was, in the end, not on the side of working-class people. But this was not enough for the ruling class in Haiti, which mobilized against him.In 2004, the United States under George W. Bush kidnapped him and forced him into exile.

In this context, it was only in 2006 that the World Bank accepted Haiti into the Heavily Indebted Poor Countries program that was started ten years earlier in 1996. As a result, a portion of Haiti’s debt was canceled, but at a high price. To qualify, Haiti had to agree to economic policies that would hurt the poor and working class, benefiting foreign capital.

After the devastating earthquake of 2010, in which 300,000 people died, Haiti took out more loans ostensibly to rebuild its devastated infrastructure. Thanks to international outrage, more debts were canceled, though many of Haiti’s rebuilding projects continued to be funded by loans. In 2010, Aristide was still exiled and kept off the ballot. The majority of the country refused to vote, and widespread fraud was documented. Yet the U.S.-controlled OAS organized what some have called a “silent coup” and endorsed the fraud-riddled elections.

Since then, Haiti has experienced three destructive hurricanes, further devastating the island: Thomas in 2010, Sandy in 2012, and Matthew in 2016, resulting in a deepening crisis of poverty. It is estimated that half of Haitians are undernourished.

Throughout the IMF’s involvement in Haiti, it has given the country loans packaged as “aid” and charity. This is classic disaster capitalism — using climate change disasters and the imperialist-imposed underdevelopment of Haiti as an opportunity for capitalist profit.

The loans always come with strings attached. Take the IMF’s 2018 “low-interest loan and grant,” which was provided on the condition that the government reduce fuel subsidies and increase tax collection. The result was a 38% increase in gas prices and a massive backlash. That is when the protests began.

The debt that Haiti owes to the IMF and World Bank is a continuation of colonialism, which keeps the country economically subservient and dependent on imperialist world powers. This colonial legacyhas been consistently enforced not only by the debt but also by concrete meddling in Haitian politics to ensure the payment of t`his debt. Beyond fuel shortages and gas prices, this is what Haitians are revolting against.

Haiti’s President Jovenel Moïse is yet another manifestation of imperialist influence in Haiti. He is a wealthy banana exporter whose nickname is the Banana Man, or Neg Bannann. He made himself appear friendly to foreign capitalists by creating a free trade zone in Haiti that allowed imperialism to expand its influence in the region. While Moïse may be popular with capitalists, he has never enjoyed the support of Haiti’s people. Only 21% of the population voted in the election in November 2016 amid widespread electoral fraud.

At the center of the protests has been gasoline, in addition to widespread corruption. In part, the gasoline crisis has to do with the U.S. blockade and embargo on Venezuela. This is important because Venezuela had previously provided cheap crude oil to Haiti. Now oil is dominated by U.S. corporations, which impose impossibly high prices. To go further, much of the money for oil has been diverted by the Moïse government for its own profit, as well as supporting IMF policies that remove fuel subsidies and increase the price of fuel.

Moïse’s subservience to IMF policies led to a massive gasoline shortage in August, which in turn led to the most recent wave of massive uprisings in Haiti, made up of masses of unemployed people, as well as the unionized sectors of the working class. Since August, there have been weekly mass protests with hundreds of thousands taking the streets, in addition to strikes in various sectors.

Debt Relief Is Not Charity. Reparations for Haiti!

Imperialist countries, particularly France, owe reparations to Haiti. They owe reparations for the “debt” that Haitians were forced to pay over 100 years to France because they fought back against slavery and won. This money needs to be paid back. With interest.

But imperialist claws in the region have gone further, with decades of U.S. meddling and IMF policies that maintain Haiti in a perpetual system of misery. The entire Haitian debt should be canceled — a politics that U.S.-based socialists must put forward.

And we must demand the end of U.S. meddling in Haiti — which means no more coups and no more propping up leaders, including the support of Moïse. It also means the end of the U.S. blockade against Venezuela, which is contributing to the devastation in Haiti.

Furthermore, although U.S. capital can travel freely in Haiti and U.S. influence has dictated the country’s policies for decades, the Trump administration ended temporary protected status for Haitian immigrants. We must fight to bring TPP status back. But even this is not enough. We must demand open borders for Haitians and all other migrants, many of whom are immigrating because of disastrous U.S. foreign policy, as well as climate change, which multinational corporations created.

Haiti was born out of the valiant struggle of slaves against their slave masters. Their victory shook the entire world and continues to be an example for the oppressed everywhere. But the struggle of the Haitian working class and poor against their oppressors is not over. Today, the oppressor does not take the form of a French slave master, but of the IMF and of the United States. The Haitian people are once again rising up.