Behind the Olympics: Crisis, Corruption and a Coup

Left Voice speaks with Carol Cacau, currently running for Rio de Janeiro City Council as a representative of the socialist Revolutionary Workers’ Movement (MRT). She describes the current situation in Rio, in the midst of the Olympic Games. 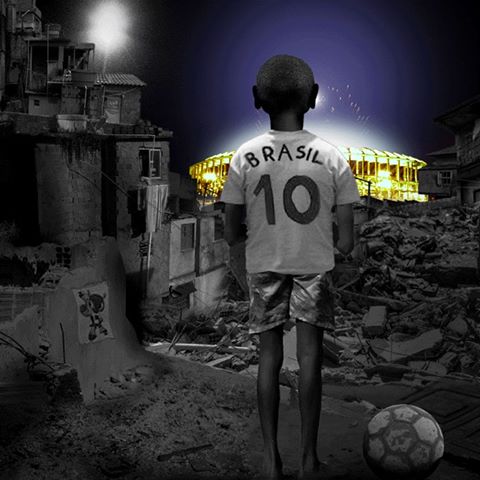 Carolina CaCau teaches geography to high school students in the outskirts of Rio. In the evenings, she studies social work at the State University of Rio de Janeiro (UERJ). For years, she has participated in the struggles of oppressed people (Blacks, LGBT people, and women) and is a member of the Movimento Revolucionario de Trabalhadores (MRT, Revolutionary Workers Movement). Today, she is running for city council as a socialist. Although the MRT is not a “legalized” political party, the PSOL (Party for Socialism and Liberty) has allowed the MRT to use their ballot line to launch the socialist electoral campaign.

The Olympics recently began in Rio. What do the Olympics mean for workers and poor people?

The Olympics in Brazil are being used as a symbol of Brazilian economic development and to show the world that Brazil is now a world power. It is a symbol that began to be constructed in the international imagination by the PT government, first with Lula and then with Dilma. Brazil hosted several mega events, like the Confederations Cup, the World Cup and now the Olympics. This has to do with an image of Brazilian prosperity that the PT was trying to consolidate. However, the prosperity of the Olympics comes in stark contrast with the misery and poverty that any tourist will surely see.

There are a series of crises in Brazil that continue to affect workers. We recently went through an institutional coup, which is currently being consolidated. We are going through a huge political and economic crisis. To the working class, the Olympics represent billions wasted and stolen; it means billions of reais spent on public projects that won’t improve the lives of the Brazilian people at all. They only exist to make sure the Olympics happen smoothly and they will have no use after the Olympics are over. They are public works with inflated prices so that the construction companies can get rich via government contracts, as well as by corruption. Bus lines have been cut, making it harder for Brazilians to move around the city. They built a new subway line, but for now, only those involved in the Olympics are able to use it while the rest of the population continues to ride in overcrowded busses, metros and trains. It means building luxury suites in public hospitals for the “Olympic family” while the rest of the Brazilian people literally dies while waiting in line to be seen by a doctor in public hospitals. The Olympics don’t bring anything good for the majority of the population.

Furthermore, workers and poor Brazilians won’t be at any Olympics events. Tickets to the events are prohibitively expensive for working people. Workers should have access to sports and culture, but the Olympics are not a way to democratize sports at all. 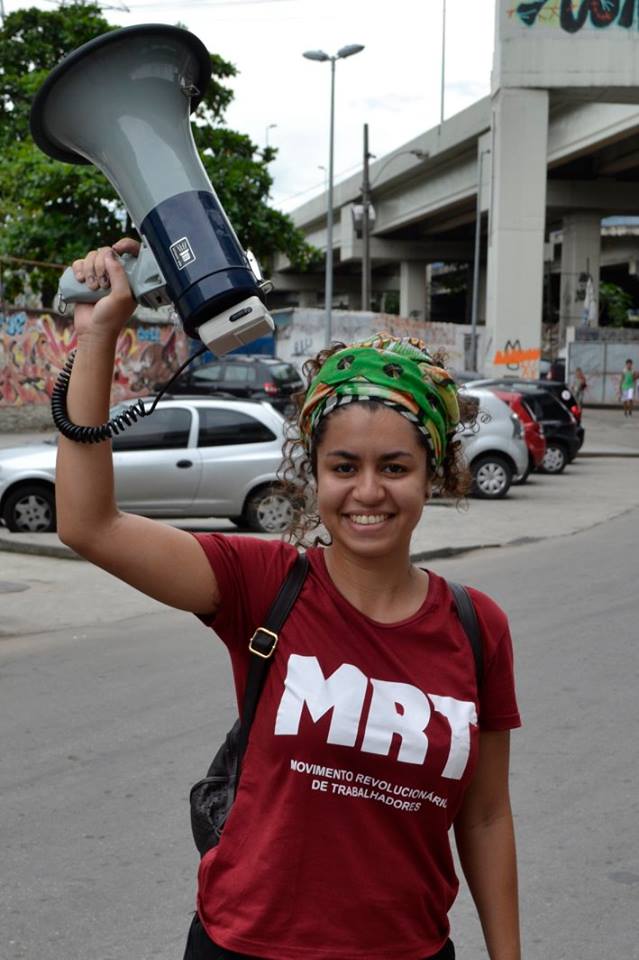 When tourists go to Rio, what will they see? What side of Rio will they not see?

But tourists will also see an effort by the government and the Olympic committee to erase poverty and protests. The media does not report that when the Olympic torch went on tour around Brazil, there were protests in many cities and people tried to put out the torch — occasionally with success! Often, there was police repression at these events as well. They try to erase poor people with acoustic walls built around the favelas and by clearing downtown Rio of homeless people in a project of social cleansing. Tourists won’t see the shoot-outs in the favelas, or the bodies of Black kids killed by the police.

But it’s hard to erase the social contrasts of beautiful beaches alongside severe poverty. On the opening day of the Olympics, there was a protest to denounce what these Olympics mean in this country, with immense poverty, an economic crisis and a government that come to power through a coup d’etat.

Recently, Black Lives Matter again took the forefront of US politics in widespread protests against police violence. What is police violence like in Rio and how is that exacerbated by the Olympics?

Representatives of Black Lives Matter were in Brazil in the past weeks to discuss the reality of police violence in the United States. It’s a very similar situation because in Brazil, police violence is also rampant. The Brazilian police kill more people than anywhere else in the world and it has only gotten worse. The so-called “pacifying” police force kills favela residents, overwhelmingly Black people. Sometimes they even kill kids. For example, at the end of last year, the cops fired 111 shots into a car full of teens or in another case, a 10 year old boy was killed by cops. Police violence is a brutal but daily occurrence in the Brazilian favelas.

Based on an argument of combatting terrorism, the repressive forces have expanded — the police, the army, the highway police, the military police, the BOP (Battalion of Special Police Operations). You name it, Brazil has it in terms of repressive forces. The police walk around the city with their assault rifles in hand and drive around the city with their rifles pointed out of the car, as if they were about to start shooting. All of this militarization means hundreds of deaths in the favelas just this year and greater repression at mobilizations.

Recently there was an institutional coup in Brazil. How did that affect the country, and specifically Rio?

Since the beginning of the year, there have been important mobilizations going on in Rio, especially in the education sector. Rio’s public school teachers led an historic strike, the longest in Rio’s history. Teachers like as myself were on strike for five months against funding cuts in schools, the firing of maintenance workers, cafeteria workers and janitors and against the lack of materials in schools. It was an important strike and our pay was cut for 17 days of the strike, which made it very hard to eat and pay rent, much less have any kind of social life that month. It was a strike that denounced the crisis of the state, the public debt and the lack of quality public education. There were several sectors of government workers who also went on strike because the government began paying their salaries in parts (rather than in full at the beginning of the month), including the 13th salary (a bonus paid to workers in December) as well as paying salaries more than 15 days late. Even though the government paid us late, we can’t be late when we pay our debts at the bank or to the landlord. In April of this year, there were 33 sectors of government workers on strike.

There were also hundreds of high school occupations in Rio This was not a phenomenon exclusive to this city. Around the country, high school students occupied their schools in Sao Paulo, Rio Grande do Norte, Goiania and more. Students showed that they were able to fill their schools with education and culture, things which the state denies them.

There is also a strike at one of the two major public universities in the city, the State University of Rio de Janeiro (UERJ). There, teachers, students, and workers all voted to strike at the beginning of the year. Incoming students for the 2016 school year have not had a single day of classes because the universities is in no condition to function. The subcontracted workers who clean the university or run the elevators go months without receiving their salary and students do not receive their measly scholarships on time. The strike at UERJ which lasted almost four months is now coming towards an end. The strikers denounced government cuts which left one of the most important universities in the country in total disrepair. It is a government that says that they don’t have money to pay the salaries of subcontracted workers, but finds the money for costly Olympic projects.

The high school occupations are some of the most significant and dynamic struggles. Yet, because the leadership did not have a politics of unity between occupied schools and other sectors on strike (like UERJ and teachers), not only did the schools not win the results they wanted, but these sectors were not able to fight back against the institutional coup and the austerity measures that resulted.

All of these strikes clearly denounced the Olympics, pointing out that there is public money for the Olympics, but not for health care or education. So today, there are protests against the Olympics around the country. In the past few weeks, they tried to put out the Olympic torch. Yet, when the Olympics began, there are no longer high school occupations and the teachers’ strike and the UERJ strike have ended as well.

How does your electoral campaign address these issues? What program do you put forth to address the Olympics?

As a candidate, I denounce the Olympics every chance I get, particularly in the two strikes I participated in—at UERJ and as a public school teacher. I also participated in the mobilizations in the streets against the Olympics. On Facebook, we made a countdown to the Olympics that denounced the conditions in transportation, healthcare and education in Rio.

My candidacy is based on the idea that we need an anti-capitalist voice to denounce the privileges of politicians and demand that every politician receive the same salary as a teacher. We demand an end to public debt payments and that the money be used for health care and education instead.

We aren’t against sports, but we are against the government putting on a mega-event by taking funding away from public services. We have denounced this in our campaign, arguing that this city was not made for workers, but rather works to exclude them. We see this in the bus lines that have been cut, making it harder for workers to get to the center of Rio, the police who harass Black kids leaving the favela and the rising cost of living in Rio. On the first day of the Olympics, the mayor said that people should try to stay home in order to not cause too much traffic or overcrowding for tourists. Since the start of the games, the mayor has made clear—this city isn’t for us, Rio’s Black community or its workers. It’s for the tourists who come to enjoy the Olympics.

Having in mind that the Olympics serve primarily foreigners and wealthy Brazilians, how can people in other countries support the struggles of Brazilians?

I think the best way for people to support the struggle in Brazil is to denounce what is really happening here — to declare that Brazil’s government was instituted by a coup. Any sort of international protest needs to include that denunciation. In fact, in Argentina, the PTS organized protests on May 1 against the coup, which made international headlines.
International solidarity must repudiate the horrific police violence in Rio and across Brazil—violence that is used to make the city “gringo-friendly.” And any international support needs to denounce that the economic crisis in Brazil is being dumped on the backs of workers and exacerbated by spending so much money on the Olympics- money diverted by corruption and spent on sham public works projects.