Cops used kettling, smoke grenades, and pepper spray in a reactionary attempt to shut down solidarity for immigrants. 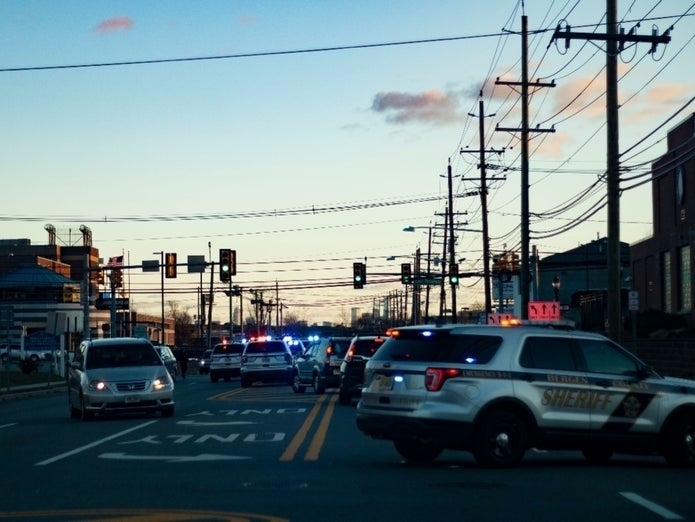 Following the violent arrest of a Black protester on Friday, police in Bergen County are going to even greater lengths than before to suppress solidarity with ICE hunger strikers in Bergen County Jail. Live streams and videos from protesters in Hackensack, NJ on December 12 showed riot police kettling and attacking protesters.

This was the 29th day of a hunger strike launched by ICE-detained immigrants in Bergen County Jail. Consistent actions to show support for the strikers and demand their release, as well as the abolition of ICE, began on November 27.

When the protests began, people were able to gather on the lawn and in the parking lot of the jail. On Tuesday of this week, cops put up a barricade to keep protesters on the sidewalk. When that did not deter them from coming to voice support for the hunger striking immigrants, police used violence, directing it first at a Black protester, and then threatening to use the same violence against any protesters who remained in the area.

Moments ago, protesters outside Bergen County Jail moved across the street to get closer. Police immediately threw several people down for arrests. #AbolishICE pic.twitter.com/Me7jndC40D

Roughly 24 hours later, protesters were back at the prison and reporting on social media that police were using riot gear (a first for these protests) to intimidate them. There was also a stronger barricade around the jail, forcing protesters to instead gather on a lawn across the road where it was more difficult for the immigrants inside the jail to hear the crowd’s vocal support. At one point when protesters tried to get closer to the jail, police attacked them with brute force and pepper spray. A live-stream by Ridgewood for Black Liberation indicated that two people were arrested.

After protesters noticed that police were attempting to kettle them, the organizers decided to march everyone to the town’s court house instead of staying in the area. Around the start of the march, many of the people streaming chose to end their live coverage.

Sheriff officers in Bergen County released smoke grenades and is pushing protesters back from the jail into town. We cannot confirm that police have used tear gas. They did use pepper spray in at least one instance earlier in the day. pic.twitter.com/c9LWHR3Xon

Several hours after the march began, NYC Protest Updates 2020, which had been covering the protest on Twitter, shared a video of riot police swarming protesters, adding that the Bergen County sheriff had released smoke grenades and that police were threatening to arrest journalists.

The consistency of the protesters has shown the cops that this movement for abolition, open borders and solidarity with immigrants is not going away any time soon. As a result, law enforcement is responding with reactionary violence. ICE officers and the regular police force of Bergen County are working together to maintain the racist institutions of borders and incarceration that fuel capitalism by dividing the working class and profiting off of the abuse of vulnerable communities. This has prompted New Jersey residents of many different backgrounds to put their time, energy, and bodies on the line. Protests will likely continue daily as long as the hunger strikers remain in the jail.