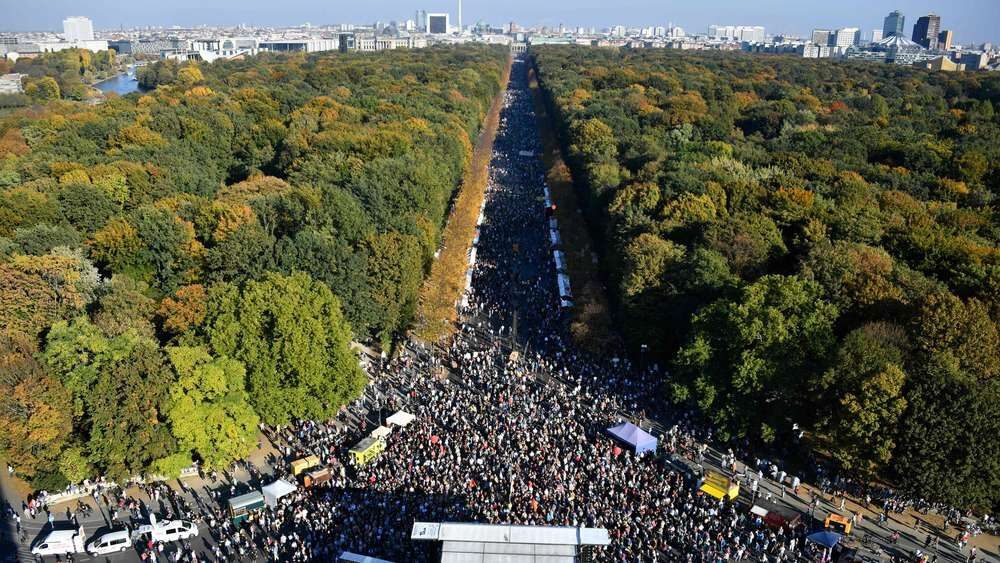 The organizers had expected 40,000 people. To everyone’s surprise, almost 250,000 showed up to demonstrate on a warm autumn day. The march began at Alexanderplatz and ended at the Victory Column, passing through the Brandenburg Gate.

The coalition that called for the demonstration was called Unteilbar (Indivisible) and included hundreds of organizations – including the services sector union Ver.di, the Kurdish association Nav-Dem, the Central Council of Muslims, the Protestant Church, dance clubs, antifa groups and countless NGOs.

The crowd was politically diverse, with everything from families with German and EU flags to masked protestors in the Black Bloc. This was originally planned as a mobilization against racism and the rise of the right-wing party Alternative for Germany (AfD), as well as fascist groups in the streets. Yet Saturday was an opportunity for a large sector of the Berlin population to express their discontent with Germany’s ongoing shift to the right – which is just as much the responsibility of the mainstream parties as the AfD.

Besides anti-racist slogans, there were also lots of social demands: Signs called for affordable housing or rejected precarious working conditions. Workers from the airline RyanAir, who have been striking for weeks for better wages and more job security, made themselves especially heard in a bloc of the trade unions. Immigrant groups also drew attention to rightward shifts in their countries.

The social democratic SPD, the Green Party and the left Party Die LINKE all supported the demonstration. Even foreign minister Heiko Maas (SPD) posted a link on Twitter, saying: “We won’t let ourselves be divided – certainly not by right-wing populists.” Support from the political establishment helps explain why the march was so massive – and yet the strong presence of social demands shows that the governing parties are far from political hegemony.

Sahra Wagenknecht, leader of Die LINKE in parliament, opposed the demonstration (and her own party’s support for the mobilization) because the manifiesto included the demand: “solidarity has no borders.” Wagenknecht has caused lots of controversy within her party due to her social-chauvinist statements against immigrants. Regarding Saturday she stated: “There is a certain milieu that will demonstrate and another that will not be seen there.” Wagenknecht and others like her wish to combine social demands and xenophobic tendencies into a new “movement” called “Aufstehen” (stand up).

The weak participation by the traditional parties demonstrates the ongoing crisis of political representation – particularly among the Social Democrats. The SPD was one a symbol of social peace and concessions to the working class. Now they are seen as nothing more than a junior partner of Merkel in carrying out austerity.

With all the established parties incapable of solving the working population’s most pressing problems – the lack of affordable health care, severe understaffing in the health care system, increasingly precarious working conditions – it is no surprise that the extreme right has gained support by channeling sentiments against the political caste.

The last time Berlin saw such a large demonstration was the protest against Transatlantic Trade and Investment Partnership (known as TTIP) in late 2015 – we have to go all the way back to the Iraq War in 2003 to find bigger mobilizations.

In Germany at the moment, there is plenty of energy and conviction to fight back against the right-wing shift. The multi-ethnic working class of Germany cannot let itself be intimidated or seduced by right-wing populism. Among the mass organizations that organized the protest, there is a force that has the strength to curb the rise of fascist groups: the unions with millions of organized workers.