Berlin: Queers for Palestine at the Radical Pride Parade

“Queer liberation is anti-racist and anti-colonial.” An interview with Dr. Melanie Richter-Montpetit, one of the co-organizers of the Queers for Palestine block at the Radical Queer March on July 26 in Berlin. 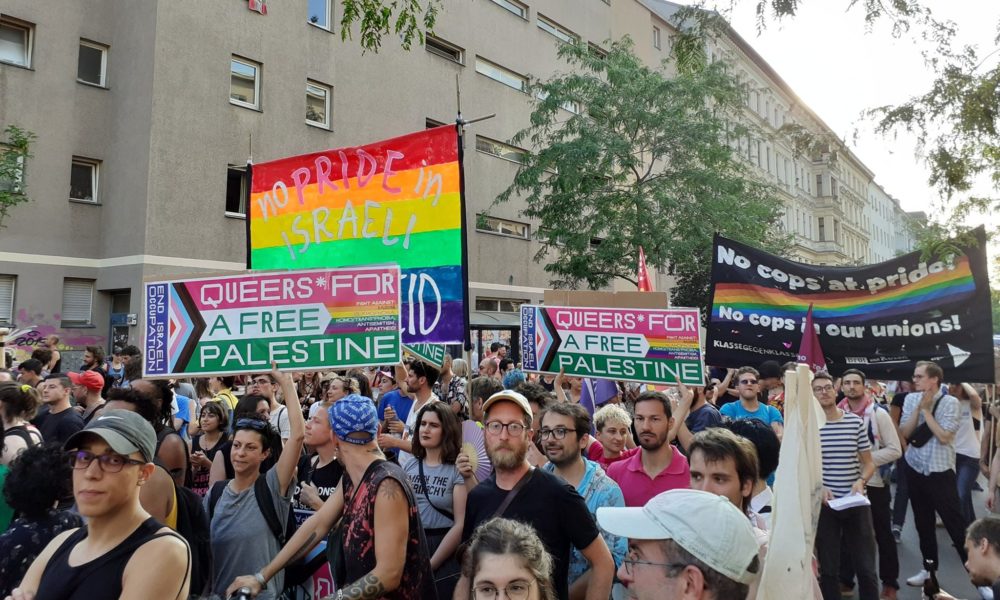 As the co-optation of “official” LGBTQ+ Pride events by capitalist forces grows ever greater, leftists in cities around the world have begun organizing alternative, explicitly anti-capitalist demonstrations. In Berlin, a Radical Queer March was organized for July 26 as a counterpoint to the city’s annual, and heavily commercial, Christopher Street Day (CSD) festivities. Days before the march was to take place, however, its organizers announced that supporters of the Boycott, Divestment, Sanctions (BDS) movement would not be welcome at the event.. In response, a group of queer BDS supporters banded together to form the Queers for Palestine block, which took part in the parade in defiance of the organizers’ ban.

Our author speaks to Dr. Melanie Richter-Montpetit, one of the co-organizers of the Queers for Palestine block. Richter-Montpetit, 41, works as a Lecturer/Assistant Professor researching war and militarism, as well as feminist and queer politics, at the Department of International Relations at the University of Sussex, United Kingdom. She has been involved in many forms of queer-feminist social justice and anti-racist politics and organizing.

You helped organize the Queers for Palestine block at the Radical Queer March on July 26 in Berlin. Why was this necessary?

I was looking forward to participating in the Radical Queer March and then a few days before the march, on July 23, I saw on the Facebook page for the event that the organizers would not tolerate anti-Semitic groups or content in the march, and that they were characterizing the BDS campaign as inherently anti-Semitic. I was appalled by this shameful trivialization of actual anti-Jewish racism, and by the appropriation of the language of anti-racism to further racist-colonial politics both in Palestine and in supposedly radical queer spaces here in Berlin. So I asked on my personal Facebook page whether my Berlin friends thought it was best to stay away from the march, or if we should go collectively and challenge the racism of the organizers and reclaim the March as a space for radical queers committed to feminist anti-racist and anti-colonial politics. So for me, it was about both showing solidarity with the Palestinian struggle and showing up against the stubborn entitlement of so many fellow white queers on the left, who seek to dictate what constitutes racism and colonialism, including by smearing support for Palestine and BDS as inherently anti-Semitic.

I spontaneously created a Facebook group the same afternoon to allow for a conversation with my friends and some of their friends about whether and how to respond to the racist statement about BDS and BDS supporters. Within hours, dozens of people joined, and soon there were more than 200 of us in the group. We decided to march together as “Queers for Palestine.” Two days later, around 48 hours before the demonstration, we created a public Facebook event to extend the invitation to other queers outside our circle of friends.

The organisers of the Radical Queer March uninvited queer BDS supporters. They equated BDS with anti-Semitism without any arguments whatsoever. What exactly is BDS and what is the problem with this equation?

BDS is a nonviolent tactic to pressure Israel to comply with international law. For nearly seventy years, Israel has denied Palestinians their fundamental rights and has refused to comply with international law. This is only possible because of international support. Governments fail to hold Israel to account, while corporations and institutions across the world help Israel to oppress Palestinians. Because those in power refuse to act to stop this injustice, Palestinian civil society has called for a global citizens’ response of solidarity with the Palestinian struggle for freedom, justice and equality. The campaign for BDS is inspired by and in the proud tradition of other successful anti-racist and anti-colonial boycott movements, including the civil rights movement in the United States and the South African anti-apartheid movement. BDS is supported globally by a myriad of social justice organizations and giants of anti-racist-liberation struggles from Desmond Tutu to Angela Davis.

The campaign for BDS has three demands: An end to the illegal occupation of Palestinian land, equal rights for Palestinian citizens of Israel, and the right of displaced Palestinian refugees to return to their ancestral homes. Under international law, Israel is obliged to respect each of these demands, and yet the international community, including the U.S. and the European Union, fail to hold Israel accountable and in fact continue to support it financially and militarily.

Now why do some critics equate support for BDS with anti-Jewish racism? The main reason is that, as in South Africa during Apartheid, the boycott campaign is working. Supporters of Israeli human rights violations call supporters of BDS anti-Semitic in order to discredit the campaign. Some people sincerely misunderstand the campaign and equate support for BDS with the racist campaign by the Nazi regime not to buy from Jewish Germans. This is not the case: BDS targets the Israeli state because of its responsibility for serious violations of international law and the companies and institutions that are complicit with this kind of state violence. The BDS movement does not boycott or campaign against any individual or group simply because they are Israeli or Jewish. In fact, many of the most prominent corporations targeted by the boycott are Western multinational corporations, from arms dealers to large supermarket chains.

On July 26, 500 people joined the anti-colonial and anti-imperialist Queers for Palestine block. One of the central themes was the fight against Israel’s pinkwashing. What is that exactly?

Pinkwashing is a strategic public relations tool that borrows from the concept of “greenwashing” developed by US marketing specialists to help businesses use “green” or eco-friendly marketing to appeal to consumers even though the production of their goods and their actual products and services are harmful to health and to the environment. Corporate and state actors have extended that cynical marketing technique to LGBT rights. They strategically brand themselves as LGBT-friendly to divert attention from the consequences of their business or political practices, including human rights violations and war crimes.

Palestinian LGBT activists have been at the forefront of calling out the Israeli state’s attempt to sell war and occupation as a way of “defending” queer people from “Palestinian-Muslim homophobia.” This is especially cynical, given the fact that, queers don’t even have full equality in Israel. The Israeli state also strategically blackmails Palestinian queers to become informants. In Berlin, pinkwashing activities of the Israeli state include a having a stand in the Gay and Lesbian city festival and participating in the official CSD parade.

How are queer and anti-colonial liberation connected today?

“Queerness” and queer politics are commonly associated with LGBT people and the struggle for—liberal—rights. Queer liberation, however, is much more ambitious. At a minimum, queer politics to me is about challenging—queering—much broader relations of power and normalisation. This kind of politics is committed to the liberation of a wide range of “perverse” or pathologised sexual subjects, practices and desires beyond “homosexuality.” This includes non-normative heterosexual subjects such as sex workers, racialized single mothers and Muslim men who are portrayed as dangerously perverted through racist discourses of Orientalism.

In addition, queer people of color are always situated at the intersection of racism, colonialism and heteropatriarchy. There is a growing recognition that queerness generally is inextricably bound up with notions of racial and colonial difference. Historically, modern Western discourses about race and sexuality emerged in tandem and were critical to modern (settler) colonial expansion. And they continue to buttress one another today. In this moment of white supremacy on steroids, the lives and rights of trans people, queers and women have been carefully chosen as battlegrounds in the fight to defend the “hite nation” by producing “white” babies via “normal” productive—that is, able-bodied capitalist—families. So queer liberation is anti-racist and anti-colonial not out of “solidarity” for an unrelated struggle, but because the violent policing of normal and abnormal sexual bodies is part and parcel of ongoing racist-colonial politics.

First published in German by Klasse Gegen Klasse on August 5.

Correction: This interview has been amended to include links.