After over a year of delays, a referendum on expropriating Berlin’s biggest landlord, Deutsche Wohnen, is set to go ahead. 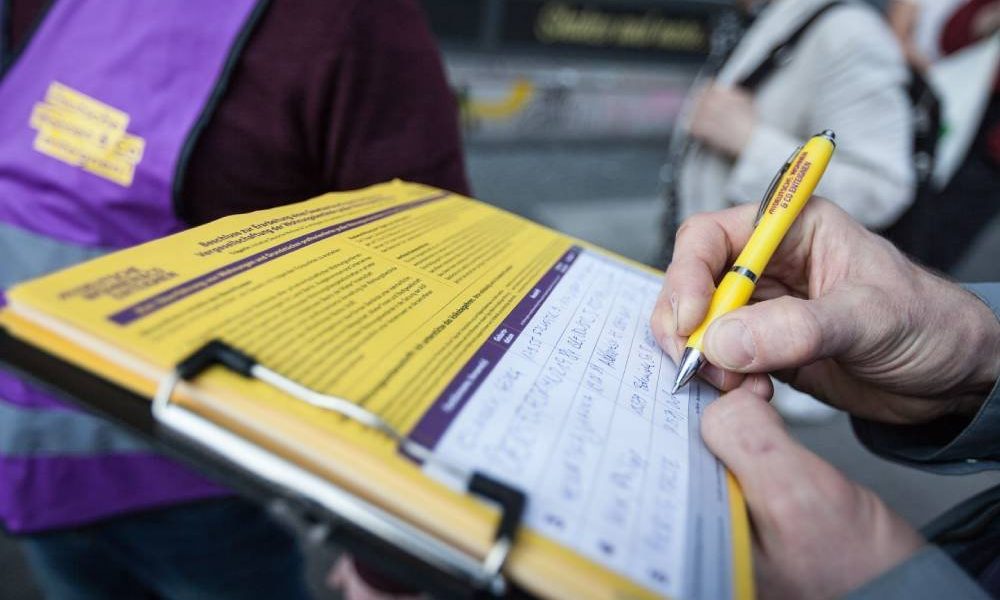 Berliners got to vote about expropriation once before. On June 20, 1926, the German Reich held a referendum about the demand to “expropriate the princes” without giving them “one pfennig.” The castles and forests still in the hands of the aristocratic houses were to be put into public ownership. At a time when poverty and unemployment was rising, there was little sympathy for the nobility that had been toppled in 1918. A huge majority of votes — 14 million, or 93 percent of all cast — said “Ja.”

But the Reich president Paul von Hindenburg, himself an aristocrat, declared that the referendum would only be successful if a majority of all eligible voters were in favour. Berlin, interestingly, even met this absurdly high quorum. But most of Germany did not — only 39 percent of eligible voters participated in the referendum. That is why, almost 100 years later, we are still stuck with German aristocrats living in obscene wealth, still owning all the forests, and demanding billions more from public coffers.

Now, it appears that we will get to vote about expropriation again. Instead of princes, however, we are now talking about the new financial aristocracy — the real estate companies that control hundreds of thousands of apartments in the German capital. The largest one, Deutsche Wohnen, has 100,000. The four largest companies own a total of 250,000 or so.

The campaign Deutsche Wohnen enteignen has cleared the hurdles to start a referendum. They collected 57,000 signatures — far more than the 20,000 required. The Senat was supposed to conduct a quick “legal review” of the proposal. The Interior Senator, Andreas Geisel from the SPD, took a full 441 days for that study! Yet the results have always been clear: expropriations are entirely possible according to Article 15 of Germany’s constitution (more on that in a second).

Now Berlin’s parliament, the Abgeordnetenhaus, has four months to vote on the proposed law. If they reject it, as they are almost certain to do, the initiative needs to gather another 170,000 signatures. Then, people in Berlin with German citizenship can vote on the proposal sometime next year. If it gets at least 50 percent of votes in favour, and at least 25 percent of eligible voters, then it becomes law.

Berliners are enthusiastic about the idea. A representative survey conducted by the Tagesspiegel at the beginning of 2019 (and that newspaper is beyond suspicion of communist sympathies) found that 54.8 percent of people think it is good that there is a push for expropriation.

How is this possible in Berlin, the former Frontstadt known around the world for its virulent anticommunism? It’s simple. The big monopolies have gone too far. Sucking up properties all over the city while ruthlessly jacking up rents, they have turned most of the population against them. Even my editor, when he heard about the story, mentioned he rents from Deutsche Wohnen and hates them.

If I were their public relations director, I would find a dozen or so renters who love Deutsche Wohnen and film them at a focus group, like those manipulative ads that Uber made about itself. But they haven’t done that — and I can only conclude that they can’t find even a dozen people in Berlin who have anything nice to say about them.

A leading figure of the campaign is Michael Prütz, an insurance salesman from Kreuzberg who has been active in Berlin’s radical Left for more than 50 years. (I interviewed him about his experiences as a 15-year-old Gymnasiast in West Berlin in 1968 for Exberliner magazine.) Prütz is shocked that after half a century of fighting against capitalism, he has finally found a topic where the majority of Berliners are on his side. Even older people in Steglitz-Zehlendorf, who once told him to “go over to the other side [of the wall],” are now in favour of expropriating big corporations, because… well, what else can you do when your rent keeps increasing year after year?

Deutsche Wohnen is a strange construct as well, more of a financial company than a real estate company. Opponents of expropriation argue that this will prevent the construction of new housing — but DW builds very little. Instead, they buy up existing housing in order to raise the rents. According to one study, they pay out more in dividends to their investors every year than they take in in rent. This is possible because every year they claim higher values for the properties on their books. Your home, in other words, is just an object for financial speculation.

So how did this Artikel 15 allowing expropriation make it into Germany’s Basic Law? According to the official English translation, it reads:

Land, natural resources and means of production may, for the purpose of nationalisation, be transferred to public ownership or other forms of public enterprise by a law that determines the nature and extent of compensation.

When the Grundgesetz was written, lots of people were skeptical of capitalism. This was just a few years after the war had ended, and no one had forgotten who had brought the Nazis to power and who had accumulated tremendous profits from such horrific crimes. In 1946, a referendum was held in Saxony about the expropriation of Nazi criminals (which was basically the entire capitalist class), where 78 percent of people voted in favour. This is why the SPD, in order to sell the new capitalist republic in the West, told people it wasn’t a capitalist republic at all. Yes, the new constitution protected private property, but it also contained an article about the possibility to expropriate capital for the public good. Thus the SPD, now fighting against the demand for expropriation, was responsible for adding this possibility to the constitution.

In the last year, Berlin got the Mietendeckel, the law on rent-caps. Around 86 percent of homes in the city are rentals, and renters love the new law, but landlords are hoping to have it declared unconstitutional. Some people assume that the rent caps were the work of Berlin’s progressive “red-red-green” government. But really, it’s the opposite: it’s this very government that privatised most of Berlin’s public housing stock in the early 2000s, leading to the constant and explosive growth of rents. It’s not that the government is going against landlords — it’s only because you have stable majorities demanding expropriation that make the rent caps look like a compromise.

There is a bigger strategic lesson in this. If you want real reforms that improve people’s lives, then you need to fight for revolution. The only reason we won the eight-hour-day in Germany is because capitalists were terrified that they would be completely toppled in the revolution. As the Trinidadian Marxist C. L. R. James put it: “The rich are only defeated when running for their lives.”

And that is why it is worth fighting for expropriation now. If the property of these financial vampire squids is put into the hands of publicly-owned housing companies, Berliners will have more comfortable lives and pay lower rents. And even if it’s not successful, we can terrify landlords and get them to lower our rents.