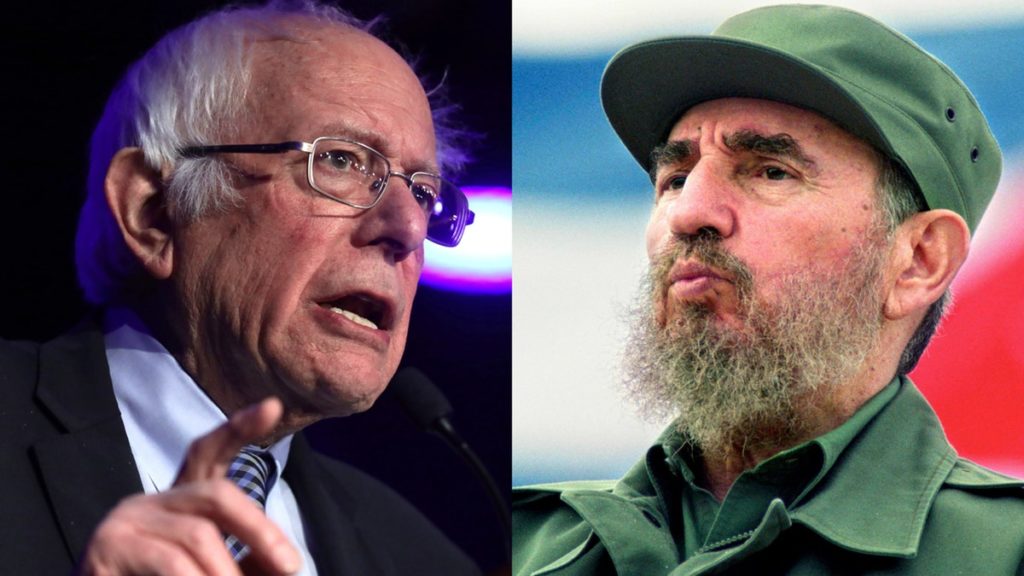 On February 23, Bernie Sanders, the current favorite to win the Democratic Party’s nomination, made statements about Cuba that have put the establishment and the capitalists in the United States on edge.

Appearing on 60 Minutes, the senator from Vermont said, “We are very opposed to the authoritarian nature of Cuba. But, you know, it’s unfair to simply say, ‘Everything is bad.’ When Fidel Castro came into office, you know what he did? He had a massive literacy program. Is that a bad thing, even though Fidel Castro did it?”

A wave of outrage swept through the liberal and not-so-liberal media. For example, the editorial board of the Wall Street Journal wrote, “Cuba has gone from being one of the most advanced countries in the region in the mid-1950s to one of the most impoverished, and the reason is its economic socialism and political tyranny. The issue for voters today is what it says about Mr. Sanders that, even after so many years of cruel evidence, he still feels compelled to insist there is a silver lining in the Cuban revolution.”

Fellow Florida Democratic representative Donna Shalala said in a statement that “Senator Sanders’ comments on the Castro regime are misguided, ill-informed and unacceptable.”

The establishment’s anti-communist hysteria is laughable, but their hypocrisy is outrageous. The Cuban Revolution of 1959 overthrew Fulgencio Batista’s bloody dictatorship, supported and armed by the United States until it no longer suited it. Before the revolution, Cuba was just another semicolony under U.S. tutelage, a hell for the workers and poor peasants and a paradise for the Cuban bourgeoisie now exiled in Florida and a faithful supporter of the Republican Party.

Before the revolution, Cuba was in the throes of social degradation. Havana was a big casino where Americans were having fun and members of the mafia were doing big business.

In 1958, infant mortality stood at 60 children per 1,000 live births, illiteracy was over 30 percent, and homelessness plagued city dwellers. In the countryside, landowners despotically exploited a gigantic mass of dispossessed peasants and rural laborers.

A Wall Street Journal editorialist notes, “In the ensuing six decades, many countries in the region have moved to near-universal literacy. The difference is that countries like Ecuador and Colombia, both of which came from much further behind, did it without having ‘totally transformed the society’ with firing squads, dungeons, torture and exile. They did it without stealing private property and driving Cubans into poverty or rafts to escape to America.”

Just a few months ago Ecuador witnessed an indigenous uprising against the government of Lenin Moreno and the austerity plans imposed by the IMF, plans that are spreading blood and poverty throughout Latin America. Colombia, meanwhile, is the “model” country for the U.S.-led war on drugs, which has left behind a never-ending war and the paramilitarization of the country.

The reality is that Cuba continues to be a “red light” for the United States more because of the gains of the Cuban Revolution than because of its limits. A small island in the Caribbean that for decades has resisted the military threat of the most powerful country in the world and an outrageous economic blockade.

The lack of democracy in Cuba that these editorialists complain about is not the democracy that must be fought for in Cuba. What the capitalist ideologues want is to crush what remains of the revolution in order to open the island to foreign capital, which is always ready to “invest” and plunder the resources of some poor country in the Global South.

They dream of restored capitalism in Cuba so that the “gusanos” of Florida, such as the Bacardi company, can return to exploit the Cuban workers. Yet the regime bequeathed by Castro does not represent a true workers’ democracy. It is a bureaucracy with privileges that, little by little, is helping to restore capitalism. But they are not the WSJ editorialists who are friends of the Cuban people or U.S. imperialism. Only the Cuban workers and masses can restore workers’ democracy in Cuba and defend the nationalized economy.

According to another Wall Street Journal editorialist, “A core claim of the Bernie Sanders presidential campaign is that ‘democratic socialism’ simply means Scandinavian-style democracy and relatively free markets with a generous social safety net. The truth is that Mr. Sanders has a long history of support for the most undemocratic of socialists, and even today he claims there were silver linings in the playbook of Marxist tyranny.”

The author is deeply mistaken. But the fear that Sanders’s statements generated in the ruling class can be explained. Not because the Vermont senator’s program is socialist. It’s not. It is a program of wealth redistribution within the framework of the capitalist system: a “Scandinavian-style democracy and relatively free markets with a generous social safety net,” as the author claims. Sanders has not even challenged the imperialist character of the U.S. regime and is contending for one of the mainstays of world imperialism, the Democratic Party. But, on the one hand, hegemonic capital is unwilling to grant either universal health care or universal public education. The very idea is repulsive to them. And on the other hand, behind Sanders there is a multiracial coalition of youth and workers whose most radical sectors know that capitalism is a miserable system.

In the minds of all those people, socialism is taking hold as a striking idea. It is the task of the socialists to explain our project to this new and growing audience. And our project is not to wrest some concessions from the imperialist state, as Sanders wants to do, nor to erect authoritarian dictatorships as the right wing says in caricaturing the Marxists. We have nothing to do with the bureaucratic degeneration that occurred in the Soviet Union and Cuba. We aspire to organize the exploited and oppressed to end the capitalist state and put the means of production at the service of social needs, not capitalist profit. We aspire to end imperialism and instead develop solidarity among peoples. We aspire for workers and the poor to govern democratically and to build a different society without a state, without social classes, and without exploitation or oppression.

With the class struggle growing in importance internationally and the left turn of broad sectors of young people and workers in the belly of the beast, conditions could not be better for these revolutionary ideas to gain traction.