In June, Democratic and Republican senators, including Bernie Sanders, unanimously voted in favor of a resolution that “reaffirms the Jerusalem Embassy Act of 1995 as United States law, and calls upon the President and all United States officials to abide by its provisions.” 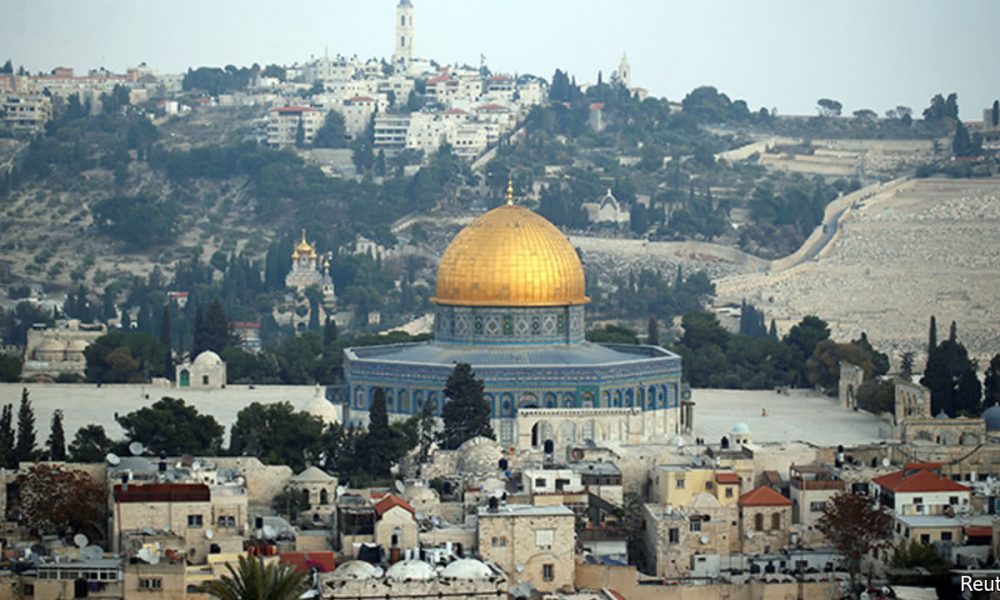 Image from The Economist

In a White House statement the Trump Administration explains the reasons behind its decision to move the U.S. embassy in Israel to Jerusalem and recognize the city as the Israeli capital. The White House declares that the decision is based on an “honest acknowledgment of plain facts.”

After Trump announced the embassy’s move last Friday, Bernie Sanders tweeted, “There’s a reason why all past U.S. administrations have not made this move, and why leaders around the world have warned Trump against it: It would undermine the prospects for an Israeli-Palestinian peace agreement and severely, perhaps irreparably, damage our ability to broker it.”

However, in June of 2017, the Senate was undivided in voting to move the capital of Israel to Jerusalem. Eighty-nine Democratic and Republican senators, including Bernie Sanders, unanimously voted in favor of a resolution that not only “reaffirms the Jerusalem Embassy Act of 1995 as United States law, and calls upon the President and all United States officials to abide by its provisions,” but also reinforces several myths about Israel that fly in the face of all evidence and show an unwavering commitment to supporting the Israeli oppression of Palestine.

Aside from calling on the President to abide by the Jerusalem Embassy Act and move the capital of Israel, the resolution has other reactionary elements.

The resolution states, “Whereas, in 1967, Jerusalem was reunited by Israel during the conflict known as the Six Day War; Whereas, since 1967, Jerusalem has been a united city, and persons of all religious faiths have access to holy sites within the city; Whereas this year marks the 50th year that Jerusalem has been administered as a united city in which the rights of all faiths have been respected and protected…”

Contrary to the reactionary statements made in the resolution, the Six Days War led to more oppression of Palestinians and was used as a justification for continued and increased Israeli settlements on Palestinian land. The Washington Institute states, “Victory was explained as a miracle, demonstrating the interventionist, divine hand in history. For Israel’s generals, there were two interesting consequences… the war marked the transition from mortal vulnerability to the hubris of invincibility.” Israel had indeed taken huge areas of land in the war. It captured the entire Sinai Peninsula and West Bank and had taken a large area of the Golan Heights from Syria.The effects of the war completely isolated and trapped Palestinians living in the West Bank and Gaza. They were denied access to Israeli air travel.

The effects of the Six Days War were anything but “unifying.” On June 10, 1967, three days after the end of the Six Days War, the 770-year-old, traditionally Palestinian Mughrabi neighborhood of Jerusalem was levelled to provide Israelis with increased access to the Western Wall. Refugees from the area were actively prevented from returning. The New Yorker states, “the residents either fled or were forcibly evicted, and the homes were razed to the ground by Israeli bulldozers. One resident, a woman, was killed when the house she was in was bulldozed on top of her. Her name was Rasmiya al-Tabaki. The deliberate destruction of civilian infrastructure in occupied territory is prohibited under the Fourth Geneva Convention. For Palestinians, the Western Wall Plaza as we know it today is the site of a war crime.”

It continues, “Water was diverted to benefit Jewish settlements at the expense of Palestinian villagers. Palestinians were blocked from using new roads constructed to facilitate travel for settlers. Israelis can drive by an occupied Palestinian village without ever having the sight of it stir their conscience, thanks to massive concrete walls obscuring the view. Likewise, throughout Israel itself, Jewish National Fund-planted trees obscure the sight of destroyed Palestinian villages across the scarred landscape. Laws to protect Israeli settlers on the West Bank and deny the rights of Palestinians are enforced, just as earlier laws placed Arab towns in Israel under martial law while Jewish towns enjoyed free movement.”

Even today, “Palestinians who are registered in the West Bank or in Gaza still need a permit from the Israeli military administration to visit Jerusalem.” So much for “the united Jerusalem.”

Israeli displacement of Palestinians from their homes and settlement construction in the West Bank has skyrocketed in recent years. In December of 2016, Ben Rhodes, a U.S. deputy national security adviser stated that, “Since 2009, the number of Israeli settlers in the West Bank has increased by more than 100,000 to nearly 400,000. There’s been an increase of more than 15,000 in the last year alone.” In response, on March 24 of this year, the U.N. passed a resolution demanding that Israel “immediately and completely cease all settlement activities in the occupied Palestinian territory, including East Jerusalem.” U.N. experts pointed out steadily increasing settlement and displacement rates affecting Palestinians. Nickolay Mladenov, a U.N. Middle East envoy, stated that “a high rate” of new Israeli settlements show “a clear intent to continue expanding the settlement enterprise in the occupied Palestinian territory.”

In the context of this active and continued oppression and violence visited on the people of Palestine by the Israeli state, the fact that the Senate unanimously voted for Resolution 176, which refers to Jerusalem as a place where all faiths are respected and protected, is all the more outrageous. At the same time, the Republican and Democratic Party have a long history of Zionism, of sending millions in aid to Israel, and of remaining silent about the suffering of the Palestinian people. What is most shocking here is that Bernie Sanders, who spoke so vehemently against the move of the capital would vote for such a reactionary resolution.

To his credit, in 1995 when the Jerusalem Embassy Act was passed, declaring Jerusalem the capital of Israel, Sanders voted against it alongside 36 other people in the House of Representatives. The vote in the House was 374–37 in favor of moving the embassy. He has also occasionally voted in condemnation of Israel’s direct military assaults on Palestine. As Politico states in “Bernie and Israel: It’s complicated,” in 1991 Sanders voted to withhold $82.5 million in U.S. aid for Israel unless it stopped building settlements in the West Bank and Gaza Strip. The motion did not pass, and the Israelis have continued building settlements while still receiving U.S. military funding. This, along with statements condemning “Israel’s continued occupation of Palestinian territories,” makes Sanders hated by Zionists.

However, at other times, Sanders has expressed support for Israel, as in the case of Resolution 176. In April 2017, Sanders co-signed a letter to the United Nations that attacked the BDS movement and argued that UN agencies unfairly target and attack Israel. In an intervew in May, he further criticized BDS, saying that he was not a supporter of the movement to boycott and divest from Israel.

At other times, Sanders’ silences speak louder than words. In his most recent foreign policy speech, he says nothing about the Israeli occupation of Palestine. In 2014, Sanders remained silent on Senate Resolution S.498, which was passed unanimously by all senators present for the vote. The resolution supports Israel “defending” itself from “unprovoked” attacks. Sanders was one of 21 senators who did not formally sign the resolution, but also did not oppose it. Likewise in 2011, while Sanders was senator, the Senate was unanimous in passing a resolution demanding that the U.N. rescind the Goldstone report, which charged Israel with war crimes during the 2008-2009 bombings of Gaza. Although there was no formal vote count on this resolution, official records say the senate was unanimous — meaning that Sanders did not oppose it.

Thus, we can best characterize Sanders’ stance on Israel as inconsistent; in an apartheid-like situation that causes death and misery to the Palestinian people, Sanders refuses to firmly take a side. The Democrats and Republicans have consistently demonstrated that they are on the side of Israel and of the oppression of the Palestinian people. In that sense, the June Senate vote for Resolution 176 is no surprise. However, Sanders’ flip-flopping on this issue may come as a shock for many who see him as a left alternative. Although Sanders now correctly speaks out against moving the capital, a real movement for Palestinian liberation cannot be trusted to Sanders or any of the Democrats.

People across the world are mobilizing against this latest offensive against the rights of Palestinians, from New York to Los Angeles to Beirut and Jakarta. In Palestine, protesters have already been murdered by Israeli soldiers during the protests. In the U.S., which maintains and funds the Israeli criminal occupation of Palestine, we must build a real movement to free Palestine; we need a Left that is on the side of the Palestinian people against Israeli aggression and occupation, not one that votes to support Israel in Congress and tweets disapproval a few months later.